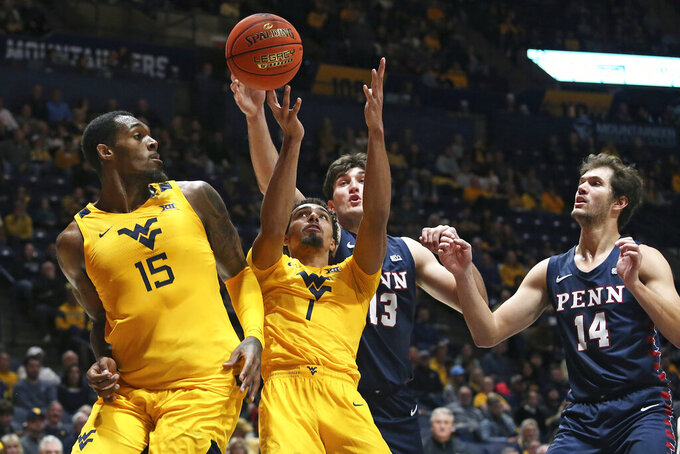 Huggins, who was inducted into the Basketball Hall of Fame in September, earned his 920th career victory, tying Jim Calhoun for third place all-time among Division I coaches behind only Jim Boeheim of Syracuse (999) and recently retired Duke coach Mike Krzyzewski (1,202).

Tre Mitchell, Kedrian Johnson and Joe Toussaint each added 11 points for the Mountaineers (4-0).

Mitchell scored nine points in the opening nine minutes, Stevenson had seven and the Mountaineers raced to a 28-9 lead. West Virginia used 13 players in the first half alone.

The teams had not met since 1981. Huggins faced an Ivy League school for the first time.

Penn: The Quakers were playing their fifth game in 12 days, including four on the road. Penn’s leading scorer, Jordan Dingle, sat out the game with a leg injury sustained in a win at Drexel on Tuesday.

West Virginia: The Mountaineers made four 3-pointers in their previous game against Morehead State. West Virginia made five in the first eight minutes against the Quakers and finished 12 of 23 (52%). But Huggins did not look pleased at times by his team's defense. West Virginia was outrebounded 38-29.

Penn plays at Lafayette on Tuesday.