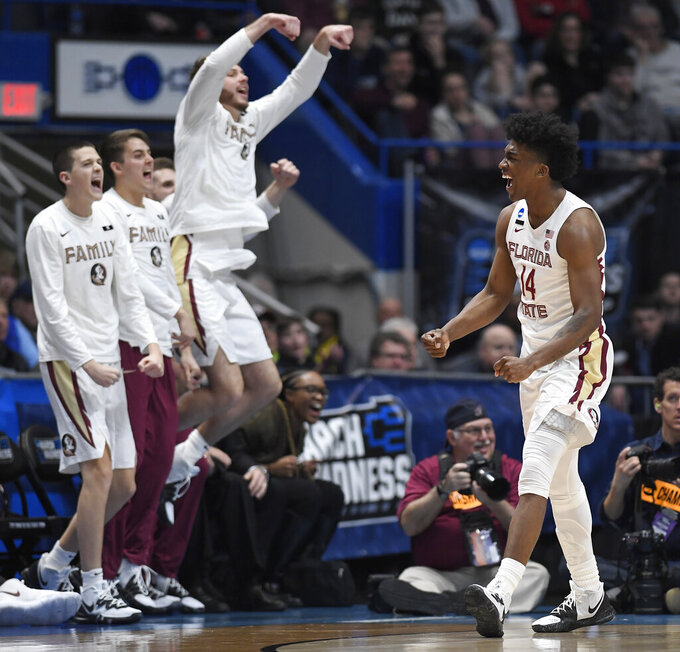 Florida State's Terance Mann (14) celebrates a basket during the second half of a second round men's college basketball game against Murray State in the NCAA tournament, Saturday, March 23, 2019, in Hartford, Conn. (AP Photo/Jessica Hill) 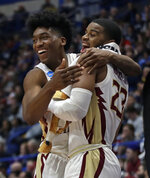 HARTFORD, Conn. (AP) — Scribbled in black marker on Terance Mann's left shoe was all the inspiration he needed: Mike Cofer, 3-21-19.

Just a couple of days ago, Mann's close friend and Florida State teammate, Phil Cofer, found out his father had died after a long illness. Mann and the rest of the Seminoles vowed to play this game, this NCAA Tournament, for "something bigger."

"We knew how much of a fighter (Mike Cofer) was and we kind of wanted to embody that and play just like he would out there," Mann said.

The Seminoles could not have done much better.

After Florida State's first-round victory Thursday, Phil Cofer received a call in the locker room, alerting him that his father, a longtime NFL linebacker with the Detroit Lions, had died at age 58. Phil Cofer chose to stay with the team, but he did not play Saturday. He was already nursing a sore foot that kept him out against Vermont.

During the playing of the national anthem before Saturday's game, Cofer lined up with his teammates, next to fellow senior Mann. Cofer stood with his head down and wiped his eyes with the sweat shirt he had pulled up to his chin. When "The Star Spangled Banner" ended, Mann put an arm around Cofer's shoulder and patted his chest.

Cofer took a seat on the sideline for the game, his right foot in a plastic boot to stabilize it.

He had a great view of one of Florida State's best performances of the season. The Seminoles overwhelmed the Racers (28-5) with their size, speed and depth — plus whatever little extra something they got from trying to honor their friend's late father.

"And when you see the way Phil play, the way he acts, the way he responds to challenges, you see Mike Cofer," Hamilton said. "And I thought that our kids tonight decided that's what we wanted to play for, something bigger than ourselves and bigger than the game."

Kabengele credited the coaching staff for allowing the players to grieve and comfort their friend, while still getting them to maintain focus on game preparation. And having Phil Cofer there with the team helped a lot, too.

"To see him be there just to support us, it gives you no choice but to play hard for him," Kabengele said. "I am hopeful that the way we played today just helped him go through this tough time."

Florida State (29-7) is in the Sweet 16 for the second consecutive year, the first time FSU has pulled that off since 1992-93, where they will face top-seeded Gonzaga in Anaheim, California.

Morant was the story of the first round, posting a triple-double against Marquette that had NBA stars Steph Curry and Luka Doncic marveling at the sure-fire lottery pick. Morant again had the Murray State fans on their feet early against Florida State. The sophomore was 5 for 5 from 3-point range in the first half, flashing his step-back and cross-over jumpers. Florida State was winning everywhere else on the court, forcing turnovers, getting out in transition and knocking down 3s.

The Seminoles came into the game shooting 33.4 percent from 3, 223rd in the nation — and then hit eight of their first 11 from behind the arc. Known for their defense, the Seminoles were playing fast and getting good shots. Florida State had a 16-point lead at the half and it didn't get much better after the break.

Christ Koumadje had two easy slams off lobs, Mann tipped in his own miss and Kabengele slammed home another rebound to make it 68-46 with 13 minutes left.

Murray State: Morant scored 28 points but had only four assists, one in the second half, after getting 16 against Marquette. The Seminoles forced the other Racers to make plays and they couldn't deliver.

"Our game plan was to take away his options of passing," Mann said.

Florida State: The Seminoles have won eight of nine and are 16-2 since late January.

Murray State: The Racers will face life without Morant.

Florida State: The Seminoles eliminated the Zags in the regional semifinal last year.