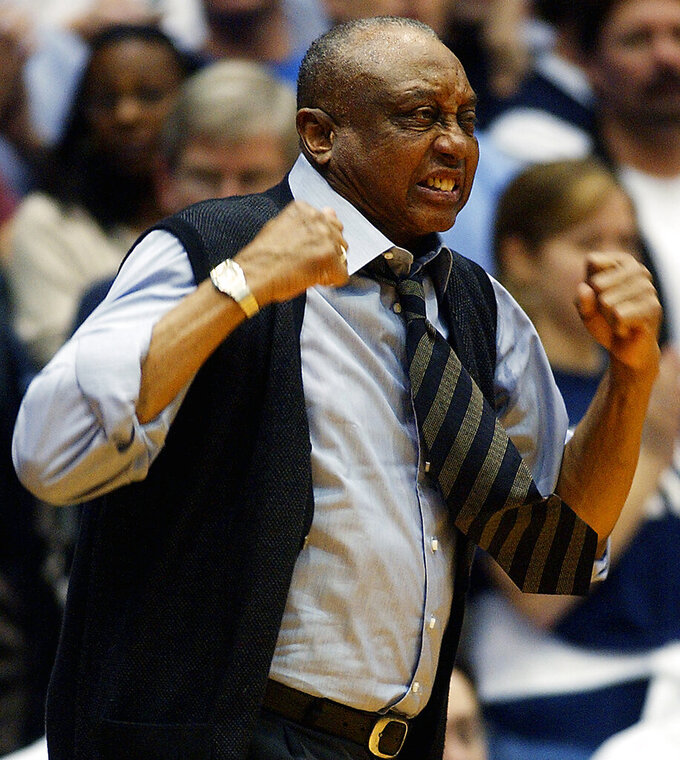 FILE - Temple head coach John Chaney reacts to a foul call in the first half of an NCAA college basketball game against Duke in Durham, N.C., in this Jan. 8, 2005, file photo. John Chaney, one of the nation’s leading Black coaches and a commanding figure during a Hall of Fame basketball career at Temple, has died. He was 89. His death was announced by the university Friday, Jan. 29, 2021.(AP Photo/Sara D. Davis, File) 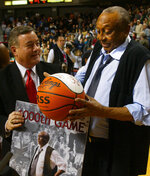 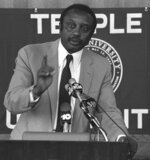 PHILADELPHIA (AP) — John Chaney’s raspy, booming voice drowned out the gym when he scolded Temple players over a turnover — at the top of his basketball sins — or inferior effort. His voice was loudest when it came to picking unpopular fights, lashing out at NCAA policies he said discriminated against Black athletes. And it could be profane when Chaney let his own sense of justice get the better of him with fiery confrontations that threatened to undermine his role as father figure to scores of his underprivileged players.

Complicated, cranky, quick with a quip, Chaney was an imposing presence on the court and a court jester off it, all while building the Owls perched in rugged North Philadelphia into one of the toughest teams in the nation.

“He wrapped his arms around you and made you a part of his family,” said Chaney’s successor, Fran Dunphy.

Chaney led Temple to 17 NCAA Tournament appearances over 24 seasons, including five NCAA regional finals. Chaney had 741 wins as a college coach. He was twice named national coach of the year and his teams at Temple won six Atlantic 10 conference titles. He led Cheyney, in suburban Philadelphia, to the 1978 Division II national championship.

When Chaney retired in 2006, the scowl was gone, the dark, deep-set eyes concealed behind sunglasses, and the over-the-top personality turned subdued: “Excuse me while I disappear,” he said.

He became a de facto father to dozens of his players, many coming to Temple from broken homes, violent upbringings and bad schools. He often said his biggest goal was simply to give poor kids a chance to get an education. He said the SAT was culturally biased and he joined Georgetown’s John Thompson -- another giant in the Black coaching community, who died in August -- in denouncing NCAA academic requirements that seemed to single out “the youngster who is from a poor, disadvantaged background.

Eddie Jones and Aaron McKie, perhaps Chaney’s two best players, were Prop 48 recruits who parlayed their Temple years into successful NBA careers. McKie is now Temple’s coach and leaned on his mentor when he had to shape the program.

“Coach Chaney was like a father to me,” McKie said. “He taught not just me, but all of his players more than just how to succeed in basketball. He taught us life lessons to make us better individuals off the court. I owe so much to him. He made me the man I am today.”

When Chaney joined Temple in 1982, he took over a program that had only two NCAA tournament bids in the previous decade and wasn’t widely known outside Philadelphia. Often, as he exhorted his team, he put himself in situations he later regretted. He was known for a fiery temper -- sending a player he called a “goon” into a 2005 game to commit hard fouls. Chaney served a suspension and apologized.

In 1994, he had a heated exchange following a game against UMass in which he threatened to kill coach John Calipari. Chaney apologized and was suspended for a game. The two later became friends.

“Coach Chaney and I fought every game we competed – as everyone knows, sometimes literally – but in the end he was my friend,” Calipari tweeted. "Throughout my career, we would talk about basketball and life. I will miss those talks and I will my friend.”

In 1984, Chaney grabbed George Washington coach Gerry Gimelstob by the shoulders at halftime during a game.

Chaney, whose deep, dark eyes seemed fitting for a school whose mascot is the Owl, was intense on the sidelines. His loud, booming voice could be heard across an arena, and his near-perfect designer clothes were in shambles after most games. After an especially bad call, he would stare down referees. He once gazed at a referee for an entire timeout with a look he dubbed the “One-Eyed Jack.”

Though he seemed permanently cranky, especially during games, Chaney was often tender and funny. He loved telling stories. His postgame news conferences were sometimes more entertaining than the games that preceded them. His retirement news conference in March 2006 wasn’t about hoops but about education’s role in helping the poor and disadvantaged. They included amusing anecdotes, pokes at the school administration and playful threats to slap the mayor.

After losing to Michigan State in his last trip to the NCAA regional finals, in 2001, he was the same old John Chaney -- with water-filled eyes, wearing a tie torn open at the collar and waxing poetic about another missed chance at the Final Four.

“It is something we all dream about, but very often dreams come up short,” he said. “Very often you don’t realize everything. But you have to realize that the growth you see in youngsters like these is probably the highest accomplishment you can reach.”

Temple’s style of play under Chaney’s guidance was never as pretty as that of Duke or North Carolina. Slow, patient and disciplined, his best teams rarely made errors, rarely turned the ball over and always played tough defense. Chaney was simply fearless in all aspects of his work.

He refused to load his schedules with easy teams, and instead traveled to hostile courts to play teams supposedly brimming with talent. He was outspoken about the NCAA’s recruiting rules, which he said hurt players trying to improve their standing in life.

“John Chaney was more than just a Hall of Fame Basketball coach. He was a Hall of Fame in life,” Dunphy said. “He touched countless lives, including my own.”

Chaney arrived at Temple before the 1982-83 season. sitting in one of Philadelphia’s toughest neighborhoods, Temple was the perfect match for a coach who prided himself on helping players turn their basketball skills into college degrees.

He was 50 and already had success at Cheyney State University, where he had a record of 225-59 in 10 seasons.

Chaney was born on Jan. 21, 1932, in Jacksonville, Florida. He lived in a neighborhood there called Black Bottom, where, he said, flooding rains would bring in rats. When he was in the ninth grade, his family moved to Philadelphia, where his stepfather got a job at a shipyard.

Though known as a Hall of Fame coach, he also was one of the best players ever to come out of Philadelphia. He was the Philadelphia Public League player of the year in 1951 at Benjamin Franklin High School.

A graduate of Bethune-Cookman College, he was an NAIA All-American and an NAIA tournament MVP before going pro in 1955 to play with the Harlem Globetrotters. With black players still being discriminated against in the NBA, he spent 1955 to 1966 in the Eastern Pro League with Sunbury and Williamsport, where he was a two-time league MVP.

“He knew what I needed when I started coaching. He just fostered that and allowed me to grow and allowed me to make mistakes and was there to pick me up when things weren’t working out as I thought they should,” said South Carolina coach and former Owls coach Dawn Staley. "Everybody in their lives, whether they’re in coaching, outside of coaching, or whatever profession, needs a person like coach Chaney in their life.”