Kessler, Tar Heels rally from 16 down to upset No. 11 FSU 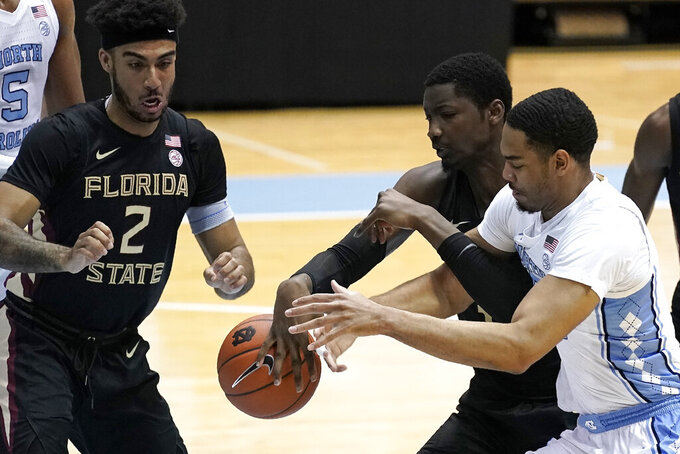 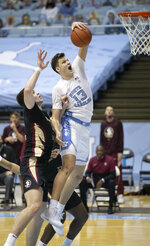 CHAPEL HILL, N.C. (AP) — It took Walker Kessler one afternoon to go from promising reserve to having North Carolina fans — the first allowed to attend games all year — chanting his name.

He earned it, too, after sparking a turnaround that helped the Tar Heels upset the Atlantic Coast Conference's top team, boost their NCAA Tournament resume and give their Hall of Fame coach a milestone victory.

The 7-foot-1 freshman scored a season-high 20 points to help North Carolina beat No. 11 Florida State 78-70 on Saturday, a game that saw the Tar Heels rally from 16 down on the way to giving Roy Williams his 900th career win.

Kessler had scored 10 points in each of his last three games, then surpassed that by going 9 for 10 from the field with 14 points after halftime. He also had season highs of eight rebounds and four blocks for the Tar Heels (15-8, 9-5).

“A lot of my points were just: I was in the right place at the right time," Kessler said. “Had guards and everyone, bigs, just throwing the ball when I was two feet away from the basket, so props to them too.”

Trailing 41-29 at halftime, the Tar Heels shot 50% after the break. But more importantly, they rode Kessler's production to better production in the paint while cutting down on the turnovers that undercut any offensive flow in the opening half.

By the end, the Tar Heels were knocking down clinching free throws and denying comeback bids from the ACC-leading Seminoles (14-4, 10-3) just days after a clunker of a performance in a home loss to Marquette.

Kerwin Walton added 13 points for North Carolina, which made all 10 of its free throws in the final 2:15 to stay in control.

RaiQuan Gray scored 17 points for Florida State, which went from being in firm control to watching it slip away amid a mistake-filled second half. As North Carolina built confidence, Florida State shot just 32% after the break and committed more turnovers (12) than field goals (11).

“They did to us what normally what we’ve been doing to other people,” Seminoles coach Leonard Hamilton said. "They had an excellent gameplan defensively, they were extremely aggressive. They were so aggressive that I thought it creates indecision on some of our parts.

“And sometimes you just got to give teams credit — it’s not as much about what you didn’t do, it’s what they did."

Florida State: The Seminoles had climbed to the top of the ACC standings by winning nine of 10 since the start of 2021, including a 21-point win against then-No. 7 Virginia. They were also chasing their first win at North Carolina since 2010. But they mirrored the Tar Heels' turnover troubles after halftime, an unexpectedly shaky performance from a team that has been surging.

“We're just learning, we live and we learn,” said Scottie Barnes, who had 12 points and seven rebounds. “We've got more games to play. We're still getting better.”

North Carolina: The Tar Heels had been trending in the right direction by winning nine of 12 after last weekend's blowout of Louisville. The Marquette loss squandered some of that momentum. But they responded by rallying from a 39-23 deficit on the way helping Williams become just the fourth Division I men’s coach to hit 900 wins. It marked North Carolina's largest halftime deficit overcome at home in win since February 2006 against Georgia Tech (13).

It marked North Carolina’s first home game with fans in attendance, which came after Gov. Roy Cooper eased public-gathering restrictions earlier this week to permit indoor arenas with a capacity of at least 5,000 to bring up to 15% of that total.

That meant North Carolina could bring around 3,200 mask-wearing fans in the Smith Center seating more than 21,000. Two fans even stuck around afterward to take a selfie with Kessler, who stood on the court below while they posed from a row of seats above the tunnel.

The Tar Heels were shooting a league-low 65% from the line, but they defied that by hitting 27 of 30 Saturday. They also had just seven second-half turnovers after committing 14 before the break, while finishing with 20 offensive boards.