Moore leads No. 10 Villanova to 74-66 win over Georgetown 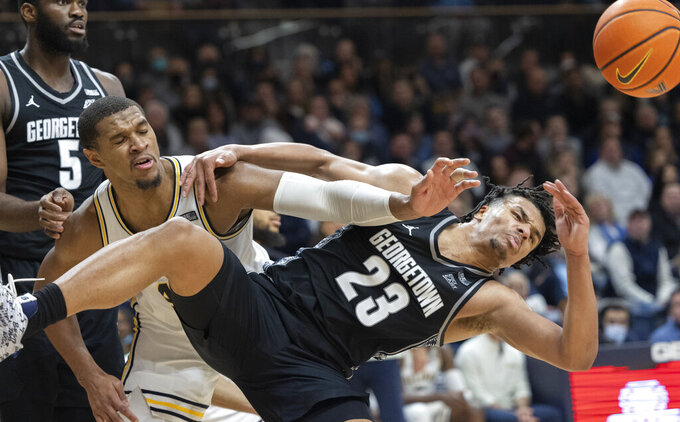 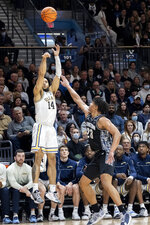 VILLANOVA, Pa. (AP) — Justin Moore couldn’t find the range in the first half, but he didn’t alter his approach.

Moore scored 15 of his 19 points in the second half to lead No. 10 Villanova to a 74-66 victory over Georgetown on Saturday.

“Nothing changed,” Moore said. “I stayed aggressive, and my teammates found me in the right spot.”

Moore missed 8 of 9 field goals in the opening 20 minutes, including all six of his 3-point tries, but made 5 of 7 shots and 2 of 3 from long range after the break.

“Great looks in the first half but they didn’t go in and he stayed confident in the second half,” coach Jay Wright said.

“We struggled, but we gutted it out,” Wright said.

“My kids, they fought the entire the game,” Hoyas coach Patrick Ewing said. “They competed, they did their best. It didn’t work out for us, unfortunately.”

The Wildcats didn’t need any heroics from Collin Gillespie this time, like in Tuesday’s 89-84 victory at No. 8 Providence when the Big East Preseason Player of the Year scored a career-high 33 points and hit a key 3-pointer late.

But things weren’t as easy for the Wildcats as might have been expected.

Georgetown hit consecutive 3-pointers to open the second half to trim Villanova’s 10-point halftime advantage to four. And the Hoyas would get as close as three twice more, the last on Carey’s 3 with 8:22 left that pulled them within 56-53 to cap an 11-3 spurt.

But the Hoyas went cold and Villanova took control from there, scoring 10 of the next 14 points to go comfortably ahead 66-57 on Moore’s three-point play with 4:19 left.

“Not a pretty game, but we’ll take it,” Wright said. “We survived.”

It was the 91st meeting between the longtime Big East rivals, with the victory giving Villanova a 46-45 edge in the series.

Ewing still believes the Hoyas can back to the level to make this series one of the best not only in the league, but in the country.

Villanova looked like they were going to run away from the Hoyas early, building a 16-5 lead 10 ½ minutes into the contest. But the Wildcats couldn’t hit from the outside, and Georgetown closed within 19-18 on Carey’s 3-pointer with 4:14 left in the first half. But the Wildcats ended the period on a 13-4 run to enter the break ahead 32-22.

It was far from the prettiest opening 20 minutes for the Wildcats, as their two leading scorers – Gillespie and Moore – combined to miss 13 of 15 field goals. But Georgetown couldn’t find the mark either, going 8 of 29 from the field and 3 of 14 from 3-point range.

Georgetown: The Hoyas have long been guaranteed their fifth non-winning conference record in as many seasons under coach Patrick Ewing. Ewing, who took over beginning in 2017-18, owns a 26-59 mark in Big East play. Once-dominant Georgetown will try to avoid its first-ever winless season in the league with a victory over DePaul on Thursday. After that, they’ll have a tough three-game stretch to finish the regular season, hosting UConn before contests at Seton Hall and Xavier.

Villanova: Vying for their eighth regular-season Big East title, the Wildcats have a challenging three-game stretch to finish the season, beginning on Tuesday at No. 24 UConn. That will be followed by a visit from league-leading Providence, which likely will be smarting after Villanova’s road victory on Tuesday.

Villanova: At No. 24 UConn on Tuesday.