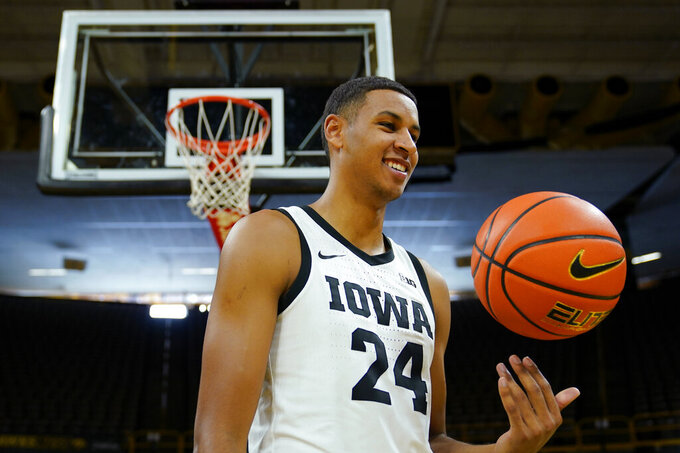 MINNEAPOLIS (AP) — Iowa has had a first team All-American in three consecutive seasons, two for Luka Garza and one for Keegan Murray, raising the natural question about who the next star will be for the Hawkeyes and how quickly he can emerge.

Kris Murray, predictably, has everyone who follows the program staring straight at him.

The third-year forward has the sleek frame at 6-foot-8 and 220 pounds, the unflappable demeanor on the court and the track record of sharp improvement after increasing his scoring average by more than nine additional points per game.

But the tendency for comparison is unavoidable for the human brain, never more in the analysis of sports, and the fact that Kris Murray is Keegan Murray's identical twin brother will hover over him as long as he puts on a Hawkeyes uniform.

“If he didn’t look the same as me, we probably wouldn’t be having this conversation,” Kris Murray said at Big Ten media day in Minneapolis. “Nobody expected Keegan to make the jump he did when Luka left. I think that’s kind of the big difference. We have a really balanced team this year.”

Keegan Murray, who averaged 23.5 points to lead the conference last season, left Iowa after his sophomore year to enter the NBA draft. He was the fourth overall pick by Sacramento.

“It was a good thing having Keegan in every single way, so I’m not taking away anything from him,” sixth-year reserve Connor McCaffery said. “But that’s a lot of shots that were in that lineup that you have to make up. So now it’s different guys coming in, every day in practice.”

One look across the Big Ten this fall reveals a trend of departed stars, rosters still in a rather awkward state caused by the eligibility waiver for the pandemic season, the relaxed rules around transfers playing right away and, as always, the allure of an NBA career.

Only eight of the top 25 scorers in the conference in 2021-22 returned to their teams. Just nine of the top 25 most-used players in terms of minutes per game are back.

There are some established standouts on the consensus title contenders like Indiana's Trayce Jackson-Davis, Michigan's Hunter Dickinson and Purdue's Zach Edey who will headline every game they play in 2022-23, but there is a wide-open stage in the league for less-heralded players like Kris Murray, Wisconsin's Tyler Wahl or Rutgers' Cliff Omoruyi to step up onto it.

The Big Ten had three top-10 draft picks, with Keegan Murray, Purdue's Jaden Ivey (No. 5) and Wisconsin's Johnny Davis (No. 10). Seven other players were drafted, including two each from Ohio State (Malaki Branham and E.J. Liddell) and Michigan (Caleb Houstan and Moussa Diabate).

But the Big Ten has long been shaped by a core of established head coaches who have remained as committed as they can be in this era to running developmental programs.

Michigan State's Tom Izzo lost his top three scorers from last season but declined to pursue any transfer replacements — even with a nonconference schedule he called “the most brutal” he's ever had. The Spartans play Gonzaga, Kentucky, Villanova and Notre Dame, plus a trip to Oregon for the Phil Knight Invitational that matches them up against Alabama and likely two other tough opponents depending on how the bracket unfolds.

“I choose the route I choose. I stand behind it,” Izzo said. “Chemistry, camaraderie, culture, loyalty are all really, really important to me. It’s worked. New era? Maybe it won’t work. But I like where we are right now.”

Established coaches who have produced consistent success have more of a latitude to be patient, to be sure. Purdue's Matt Painter, Wisconsin's Greg Gard and Iowa's Fran McCaffery have all followed a similar philosophy. Ohio State's Chris Holtmann will lean on freshmen as much as ever, with prized rookies Bruce Thornton, Brice Sensabaugh, Roddy Gayle Jr., Felix Okpara and Bowen Hardman putting the Buckeyes at the top of just about all the Big Ten recruiting rankings.

This season, then, ought to serve as a test case of sorts for several of the conference's top teams as they put the value of stability up against some of the other powerhouse programs across the country who might be relying more on game-ready transfers.

“We all make jumps year after year,” Kris Murray said. “The thing about Iowa basketball is we’re always improving.”