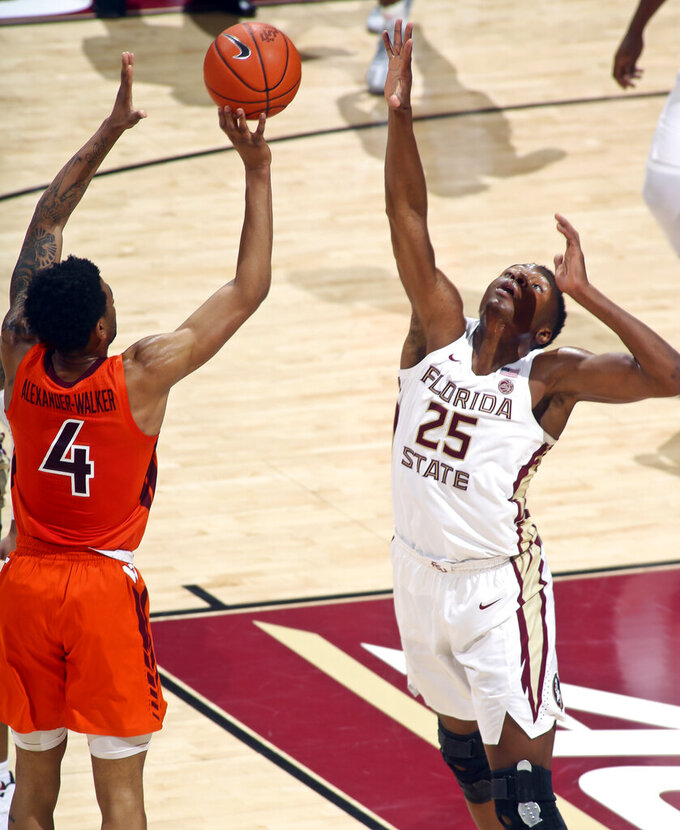 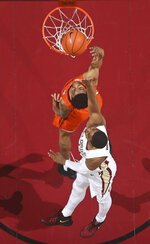 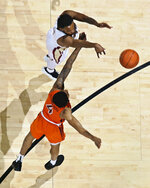 M.J. Walker scored nine of his 11 points after halftime, including a critical 3-pointer in overtime, and Florida State rallied to top No. 15 Virginia Tech 73-64 on Tuesday night.

Mfiondu Kabengele scored 13 of his 17 points in the second half and overtime, while Terance Mann added 14 points as Florida State improved to 15-1 at home this season and tied the program record with 12 Atlantic Coast Conference wins.

"We're all basically vets," Mann said. "We've been through everything. We've been through an Elite Eight run. Even going to the NIT. Games like that, you don't really have to panic. It's just halftime, you have a whole another half to throw a punch. And that's what we did."

The Seminoles rallied after trailing 35-22 with 18:08 left in regulation. Six minutes later, Florida State tied the game and Mann's 3-pointer with 11:26 remaining put the Seminoles ahead.

Virginia Tech was short-handed playing without guard Justin Robinson (foot) and forward Kerry Blackshear (fouled out), but the Hokies kept the game close.

Ahmed Hill hit a 3-pointer with 14 seconds left in regulation to tie the game at 61. After a timeout, Mann missed a 3-pointer at the buzzer and the teams went to overtime.

Florida State outscored Virginia Tech 12-3 in the extra period, making 7 of 8 free-throw attempts as the Seminoles improved to 3-0 in overtime games this season. They shot 86.4 percent (19 of 22) from the free-throw line for the game.

"I think it's pretty remarkable that in year 4 we would play for the fourth seed in the best league in the country," Virginia Tech coach Buzz Williams said. "And considering all that's transpired this season, to play the way that we have played in the last nine games, it's scarred my heart in a good way."

Nickeil Alexander-Walker scored 19 points and Hill added 18 points to pace Virginia Tech, which didn't make a basket from the floor for a span of more than five minutes in the second half as Florida State regained the lead.

Blackshear, the Hokies' tallest player at 6-foot-10, fouled out with 2:46 left in regulation. He had nine points and five rebounds but it was a tough loss for Virginia Tech, which only goes seven deep and was also without the injured Robinson.

Florida State has won 12 straight against Virginia Tech in Tallahassee, going back to 1990 when the teams were Metro Conference rivals. The Seminoles are 9-0 at home in ACC games against the Hokies.

Hill and Alexander-Walker each had 10 first-half points as Virginia Tech raced to a 33-19 halftime lead. The Hokies outrebounded FSU 21-13 and held the Seminoles to just 26.9 percent (7 of 26) from the floor.

"Virginia Tech did an unbelievable job in the first half of bottling us up and taking away the things that we were accustomed to doing," Florida State coach Leonard Hamilton said.

"I thought our guys turned it up defensively (in the second half). I think we showed a lot of character by being down such a large margin in the first half, not playing very well.

"We could have very easily have gotten discouraged. We didn't panic. I thought the guys responded to each other and responded to the challenge that we gave them as coaches."

Florida State's seniors high-fived fans and played conductor for the Seminole Sound after the hard-fought win.

The victory on senior night gave Florida State 93 wins in the past four seasons. The Seminoles have the second-most wins over a four-year stretch in program history, just short of the 95 victories by the 2008-12 teams. Florida State still has one regular-season game remaining (at Wake Forest on Saturday) plus the ACC Tournament and NCAA Tournament to achieve the record.

Florida State could climb toward the top 10 with a victory in the regular-season finale against Wake Forest. It's hard to fathom Virginia Tech would move down much, if at all, and could remain in the top 15 with a win over Miami.

Virginia Tech: The Hokies were dominant in the first half, but ran out of gas in overtime. They were again without Robinson, who was in street clothes but coaching up teammates from the bench.

Florida State: The Seminoles scored just 19 first-half points, their lowest total of the season. But a 12-0 second-half run and success at the free-throw line helped them to the win.