No. 25 Texas Tech newcomers are younger for Adams this time 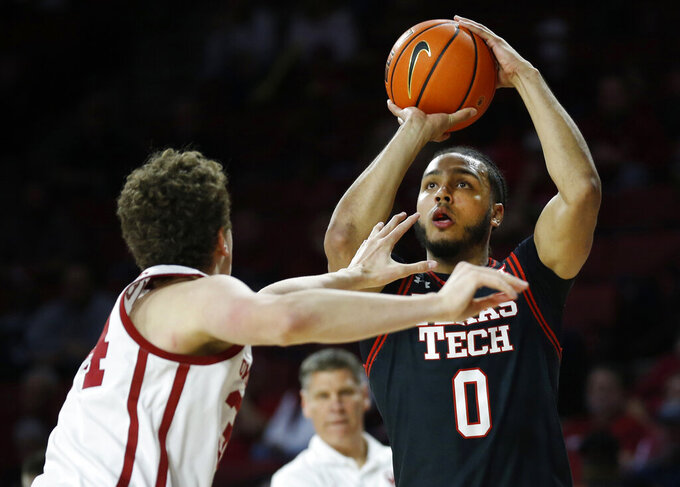 Texas Tech forward Kevin Obanor (0) shoots against Oklahoma forward Jacob Groves during the first half of an NCAA college basketball game Feb. 9, 2022, in Norman, Okla. Texas Tech returners from last season include Obanor, who had double-doubles in each of the Red Raiders’ three NCAA Tournament games as they made another NCAA Sweet 16. 600 words, photos. (AP Photo/Garett Fisbeck, File)

Texas Tech again has a bunch of new players on its roster. This time, the newcomers are much younger.

The 25th-ranked Red Raiders go into the second season for homegrown head coach Mark Adams with only three returning players. The 10 newcomers include five true freshmen and five transfers, only two of them seniors.

“Our biggest challenge for our coaching staff is to get these guys thinking older and playing older, and playing with some maturity,” Adams said.

Four of Texas Tech's primary starters through much of the Big 12 schedule last season were seniors in their first — and only season — in the program. Senior big man Marcus Santos-Silva was in his second season after three at VCU.

The lone returning starter is s uper senior forward Kevin Obanor, who averaged 10 points and 5.5 rebounds as Tech went 27-10 and made it to the NCAA Sweet 16.

A touted transfer class includes four guards and 6-foot-11 forward Fardaws Aimaq, who averaged 12.7 points and 11.1 rebounds a game over the past three seasons at Utah Valley State. The two-time Western Athletic Conference defensive player of the year is expected to miss the start of the season with a foot injury.

Kerwin Walton started as a freshman at North Carolina before being limited by injuries as a sophomore last season, when guard D'Maurian Williams averaged 14.5 points at Gardner-Webb. De'Vion Harmon returns to his home state with two seasons of eligibility remaining after averaging 10.8 points at Oregon last season, following two years at Oklahoma. Jaylon Tyson transferred from Texas during the Christmas break last season.

“We were very, very selective on who to bring in and did our due diligence to find the right guys that had the attitude that wanted to be coached,” Adams said. “But still we’re a long ways from trying to get this team to be a team.”

Five-star prospect Elijah Fisher joined the Red Raiders after his junior year at Crestwood Academy in Toronto, where the 6-6 guard played on the varsity level for six years.

“He’s the youngest player on our team. One of the most highly recruited players we’ve ever had with the Red Raiders, but he’s playing with a lot of physicality, maturity,” Adams said. “I already think he’s going to be one of our best defensive players, which is somewhat of a surprise for a young guy to be able to have that kind of defensive instincts and maturity. High expectations for him.”

Very involved as the top assistant for Chris Beard, Adams stayed that way in his first season as Tech's head coach. He plans to delegate more in Year 2, especially with two new assistant coaches.

While still planning to do most of the defense, Adams is going to get help on the offensive side from Al Pinkins from Florida and three-time junior college national championship coach Steve Green from South Plains College in Texas.

“I'm making a few changes,” Adams said. “We're trying to be a little more aggressive getting up and down the floor a little quicker, and getting a little more flow to our offense again.”

LOST IN THE PORTAL

Texas Tech is home for eight of its 12 games before the Big 12 opener at No. 14 TCU on New Year's Eve. The only time the Red Raiders leave Texas before Jan. 10 is for three games in Maui the week of Thanksgiving. They will be in Houston on Dec. 17 to play Jackson State in the HBCU Roundball Classic.