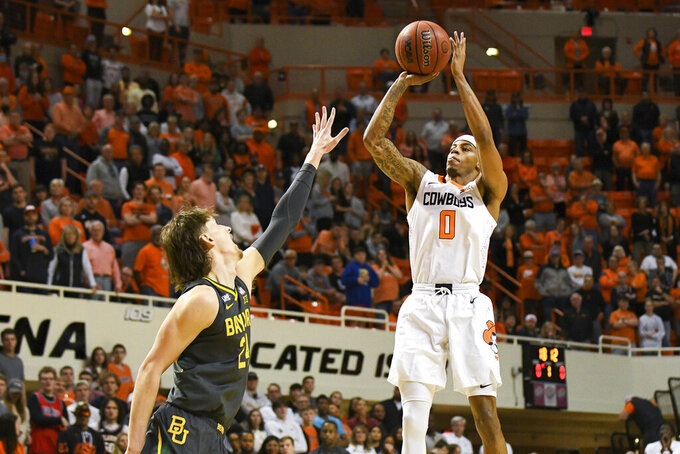 Oklahoma State has the postseason in its sights after being banned last season.

The NCAA punished the Cowboys after former assistant coach Lamont Evans accepted up to $22,000 so he could help steer athletes to certain financial advisers. Evans was arrested as part of a federal corruption investigation in 2017, and he pleaded guilty in 2019.

“It was a really, really difficult season for our team to go through last year with that already on the forefront before we ever played a game, no question about it,” Oklahoma State coach Mike Boynton said.

Boynton thought the penalty was unfair, especially because the activity happened before he became head coach. Judging by the way similar violations have been treated since, he believes the penalty might have been the last of its kind.

“It sucks to now be a footnote in history,” he said. “We’ll probably be (the answer to) a trivia question: ‘Who is the last team to suffer a postseason ban over a recruiting violation?' The answer will probably be the 2021-22 Oklahoma State men’s basketball team."

The Cowboys are ready to move forward, and guard Avery Anderson leads the charge. The preseason All-Big 12 selection averaged 12.1 points per game last season. He scored 34 points at home against Iowa State and 25 at Oklahoma.

Moussa Cisse is back to protect the rim. The 7-foot-1 junior was one of the three players who shared Big 12 Defensive Player of the Year honors last season. He averaged 7.2 points, 6.5 rebounds and a conference-leading 1.9 blocks.

Boynton said Cisse, who came to Oklahoma State as a raw athlete, became more polished in the offseason. The Cowboys will be looking for him on offense more often this season.

“We feel like if we can make some steps in terms of being able to throw it in the air every four or five possessions and getting a positive result, it will make the game easier for the guys he’s on the court with," Boynton said.

The two cogs give Boynton hope that this team will be successful.

“I’m excited about this group,” he said. “We’ve got some experience, probably the most experienced team that I’ve had since my first year (2017-18). ... The guys have worked really, really hard, like all these teams. And obviously we’re just chomping at the bit to start competing.”

Kalib Boone is back for Oklahoma State, even though his twin brother and former teammate, Keylan, transferred to Pacific.

Kalib finished second in the Big 12 with 1.3 blocks per game last season, despite fighting through early injuries. The 6-foot-9 forward scored a season-best 20 points in the win over North Carolina State on Nov. 17 and averaged 5.8 points, down from 9.4 the previous season.

Caleb Asberry was an All-Sun Belt first team selection at Texas State last year. He averaged 13.6 points per game, started every game and led the team in minutes played, steals and 3-point goals.

John-Michael Wright was a three-time All-Big South selection at High Point. He led the league with 18.4 points per game and added 4.4 rebounds and 3.4 assists.

Guard Bryce Thompson is back after averaging 10.6 points per game in his first year with the Cowboys after transferring in from Kansas. More is expected this year.

“He is certainly somebody that we’re going to look to to lead us from a scoring standpoint,” Boynton said. “He and Avery Anderson will probably be our two kind of spearheads in the backcourt there. So he’s going to do, hopefully, what he was expected to do out of high school, which is be an impact player in the best conference in America.”

Boynton on navigating the transfer portal: “We have transfers ourselves, so I don’t want to sit up here and be hypocritical. But we try to be very intentional about the type of kids we bring into our program and helping them understand what our program is about and why they can have success and why our program will have success with them.”