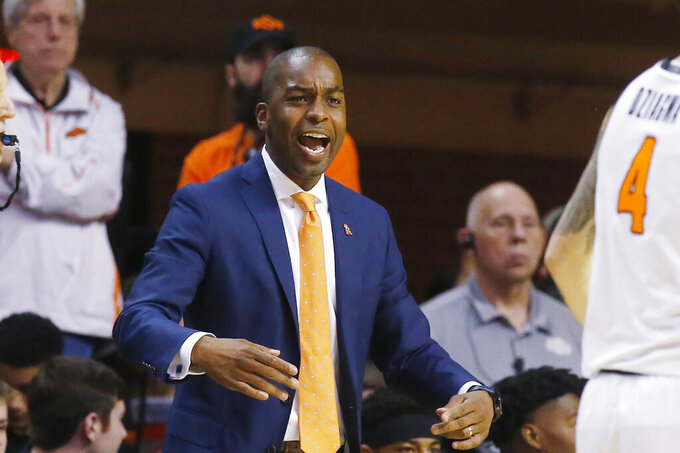 Cade Cunningham, one of the nation's top basketball recruits, has chosen to remain at Oklahoma State despite the program being banned from the 2021 postseason.

Cunningham won the Naismith High School Trophy given to the nation’s best player. He is No. 1 in the Rivals and 247Sports recruiting rankings for his class and No. 2 in the ESPN 100. The 6-foot-7 point guard was the key piece of a highly ranked class that gave fans hope that Oklahoma State would return to its past success.

Many wondered what Cunningham, a one-and-done prospect, would do. He made his announcement in a video he posted to social media on Monday.

Oklahoma State coach Mike Boynton has compared Cunningham’s possible impact to that of Oklahoma’s Trae Young during the 2017-18 season. As a freshman, Young led the nation in scoring and assists and lifted a team that struggled the previous season to the NCAA Tournament.

Boynton worked with Cunningham and his family to figure out the next step, and in the end, Cunningham stuck it out.

“Loyalty,” Cunningham said in the video. “It’s more than a word. It’s action. It’s standing by the people you started with. It’s showing up, even when times are hard. It's believing in the people who always believed in you. It's a commitment."

Cunningham isn't the only one from the recruiting class who chose to stay. Donovan Williams, Rondel Walker and graduate transfer Ferron Flavors each made social media posts saying they would stay. Matthew Alexander-Moncrieffe reportedly has agreed to remain with the program, and Boynton expects Montreal Pena to stay, too.

Boynton said the recommitments might be a bigger deal than the original commitments.

“I don’t know if it’s unfair to say it’s more significant, probably because there’s a lot of opportunity for these guys to be pulled in different directions," he said. “Any sign of negativity and things not being as comfortable usually causes most people to look in another direction for that hope.”

Boynton said he told the players that though the school is confident it has a strong case for its appeal, it might not change anything.

“We can point to some things that we can say, ‘Hey, this is a step too far,'” Boynton said. "But I don’t think any of our guys are going to come in here feeling like there’s no chance that the sanctions could be upheld.”

Center Yor Anei, a 6-10 center who started 25 games last season, has announced he is entering the transfer portal. Hidde Roessink, a 6-10 forward, also has reportedly entered the portal.