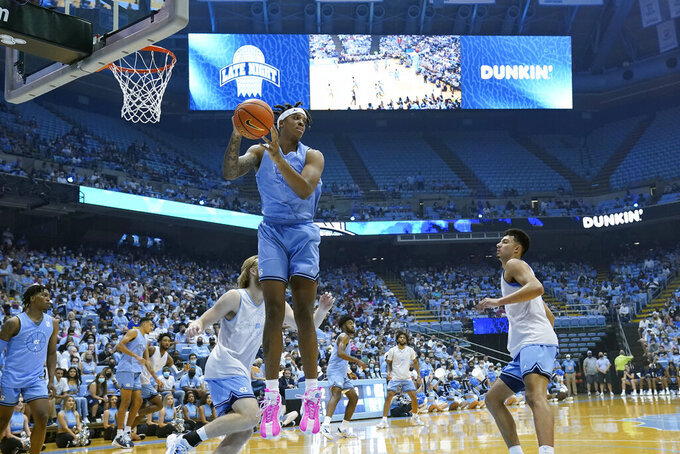 Hubert Davis' connections to North Carolina have touched just about everything in his life.

He played under late Hall of Famer Dean Smith before a 12-year NBA career. He coached under another Hall of Famer in Roy Williams. The program ties even reach into his family as the nephew of 1970s program great Walter Davis.

Now the 51-year-old first-time head coach – who took over after Williams’ retirement in April – is operating as a bridge from No. 19 UNC’s tradition-rich past to its future.

“It’s not just this job,” Davis said. “There hasn’t been a decision that I have made where I haven’t thought about what Coach Smith and what Coach Williams and what Coach (Bill) Guthridge would say or do.”

The first job for Davis — the program's first-ever Black head coach — will be to squeeze consistency out of a roster that befuddled Williams all last season before bowing out in the first round of the NCAA Tournament.

“I just feel like it’s a blessing that he got the job because I feel like we already had a connection when he was an assistant,” sophomore point guard Caleb Love said.

Picked to finish third in the Atlantic Coast Conference, the Tar Heels (18-11, 10-6) return their top scorer and rebounder in 6-foot-10 junior Armando Bacot, as well as Love as the returning point guard. They’ll serve as the cornerstones for Davis’ work in putting his own touches on philosophies learned under Smith and Williams.

Williams, for example, preferred to have two post players attack the glass and draw fouls to get to the line in a fast-paced scheme. While Davis mentions those same things, he also frequently talks about his preference for versatile big men who can step outside.

That led to pursuing transfers such as Oklahoma’s Brady Manek and Marquette’s Dawson Garcia, as well as Virginia forward Justin McKoy.

“Carolina is going to be Carolina because I believe in it and I trust it,” Davis said, “but I’m also going to do it with my own personality and my own shoes.”

Some other things to know about the Tar Heels for the 2021-22 season:

Bacot averaged 12.3 points and 7.8 rebounds while shooting 62.8% last season to lead a deep frontcourt that included Garrison Brooks, Day’Ron Sharpe and Walker Kessler. Those players are all gone, with Sharpe being a one-and-done NBA pick while Brooks (Mississippi State) and Kessler (Auburn) were transfers.

Davis said Bacot has worked on stretching his shooting range to the 3-point arc, too.

Love had moments as a freshman where he looked capable of becoming a dominant floor leader, then followed with multiple questionable decisions.

The transfers provide potential for an immediate impact.

The 6-9 Manek is a graduate transfer who averaged 10.6 points in four seasons. Garcia, a 6-11 sophomore, averaged 13 points and 6.6 rebounds last year. McKoy, a 6-8 junior, has the potential to provide rebounding and defense.

UNC had just one reliable outside shooter in Kerwin Walton, who hit 42% from behind the arc as a freshman but found himself facing heavy defensive attention in that role. The Tar Heels are hoping Manek in particular can help after making 235 3s in his time at Oklahoma.

The Tar Heels play in the Hall of Fame Tipoff in Uncasville, Connecticut, where they face No. 7 Purdue (Nov. 20) and could face either No. 4 Villanova or No. 18 Tennessee the following day. There’s a home game against No. 6 Michigan (Dec. 1) in the ACC/Big Ten Challenge and a matchup with second-ranked UCLA in the CBS Sports Classic in Las Vegas (Dec. 18).

The Tar Heels open ACC play at Georgia Tech on Dec. 5 and close the regular season at ninth-ranked rival Duke on March 5 in the final home game for retiring Hall of Fame coach Mike Krzyzewski.