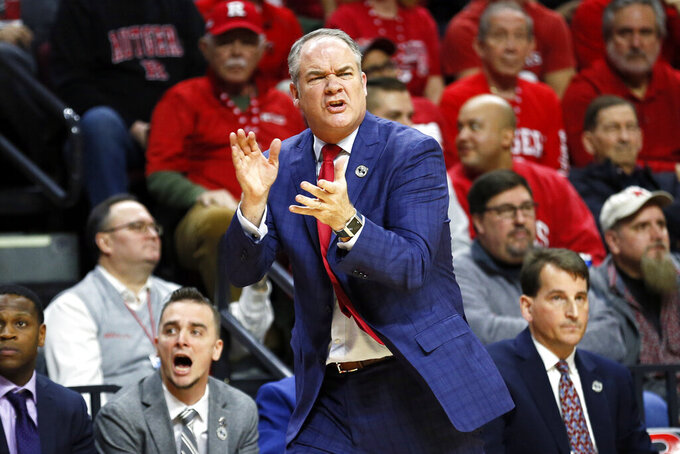 FILE - Rutgers head coach Steve Pikiell directs his team against Illinois during the first half of an NCAA college basketball game in Piscataway, N.J., in this Saturday, Feb. 15, 2020, file photo. Rutgers won 72-57. Rutgers is heading into the basketball season with its first preseason ranking since 1978-79. (AP Photo/Adam Hunger, File)

PISCATAWAY, N.J. (AP) — It's time to stop talking about the postseason drought at Rutgers.

While the Scarlet Knights still have not been the NCAA Tournament since 1991, the only thing that kept them out last year's event was the coronavirus pandemic, which forced the cancellation of the biggest showcase in college basketball.

That left Rutgers and its fans in disbelief after so many disappointing and bad seasons. Steve Pikiell and his team were less than a week away from receiving a bid when their season ended early. They finished with a 21-11 record, went 11-9 in the very competitive Big Ten Conference and were ranked for the first time in 41 years. They were not rewarded.

The positive is that this is expected to be an even better year for Rutgers. With most of their starters back and a talented recruiting class that includes a very tall center, the Scarlet Knights are ranked No. 24 in The Associated Press preseason poll.

It's the New Jersey flagship university's first preseason ranking since 1978-79.

Pikiell's only disappointment is that last year's seniors didn't get a chance to experience the NCAA Tournament.

“I am also telling our players they earned it last year, and this year they expect us to go, but no one is giving us a free pass,” he said. “We are expected to win more games. We just have to keep going in the direction we have been going, do a good job of developing players and keeping them healthy and COVID-free, and let’s have another great year and take that next step.”

Rutgers has the personnel.

The recruiting class is easily Pikiell's best entering his fifth season. It is led by center Cliff Omoruyi and three other big men — Mawot Mag, Oskar Palmquist and Dean Reiber.

At 6-foot-11, Omoruyi was listed as a top-50 recruit and might be the fastest athlete on the team. Combing him in the middle with Johnson should be interesting.

Rutgers was one of the nation's top defensive teams last season. It might be better this year, given its height, length and pressure.

“Expectations are just different now, which I just love,” Pikiell said. “They weren't there four years ago, three years ago, two years ago. I am embracing them as part of the journey as we build the program.”

The Rutgers Athletic Center is one of the toughest places for an opponent. The Scarlet Knights rode a great season and its crowd last season, posting a 17-1 record at home.

With crowds being limited to roughly 150 people under state coronavirus restrictions, the home-court edge might be lost.

Pikiell said his players are going to have to motivate themselves.

The season is expected to open on Nov. 25, but the only game currently on the schedule is a home game on Dec. 8 against Syracuse in the annual ACC-Big Ten Challenge.

The Big Ten has not released its schedule. Rutgers has been talking with several New Jersey schools, but it is having trouble finalizing a game with Seton Hall. The two schools have a contract to play, and this year's game is scheduled to be held at the Prudential Center. However, the Pirates are frustrated because they played at Rutgers last season in front of a crowd and don't want to have a home game without fans because of the pandemic.

Pikiell got a recent upgrade with the opening of a $115 million practice facility that will give players the chance to work on their game any time of the day.

In the past, the men's basketball team had access to the RAC for two hours a day, sharing the building with 13 other sports.

“I'm sure everyone else in our league has that advantage,” Pikiell said. “Those are things we never had.”

They do now, along with a ranking.