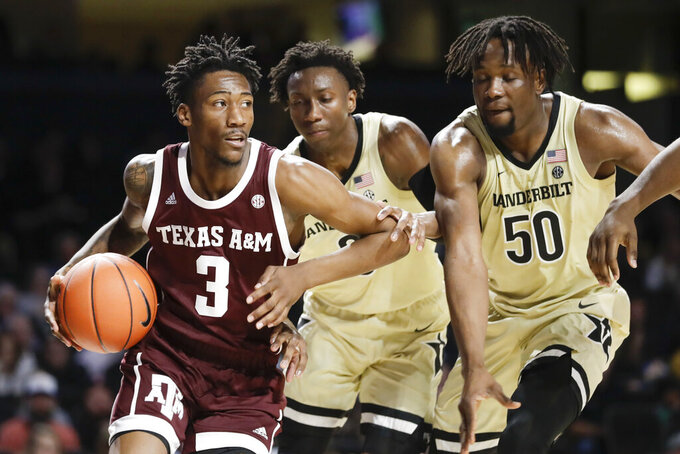 NASHVILLE, Tenn. (AP) — The Vanderbilt Commodores are fighting the feeling that Memorial Gym might be haunted after likely losing their leading scorer for a second straight season.

First-year coach Jerry Stackhouse said Saturday after a 69-50 loss to Texas A&M that Aaron Nesmith has a right foot injury that will keep the Southeastern Conference's top scorer using a scooter for much of the next six weeks. The Commodores lost freshman Darius Garland, now in the NBA with Cleveland, to a knee injury after five games last season.

“We don’t anticipate him being a part of what we're doing anymore this season,” Stackhouse said of the sophomore guard.

The Commodores' 22nd consecutive loss in league play is the least of Stackhouse's concerns. Nesmith ranked fifth nationally averaging 23 points a game and played an average of 36 minutes a game. Stackhouse said Nesmith's foot had been checked by X-rays, but an MRI after an 83-79 loss at No. 5 Auburn showed the unspecified injury.

Stackhouse said Nesmith was in tears after learning the diagnosis. Nesmith watched from the bench forced to use a scooter to keep his weight off his right foot protected by a walking boot. He already is projected as a mid-first round pick in the NBA draft in June, and Stackhouse said no ligaments were involved.

Texas A&M coach Buzz Williams learned of Nesmith's injury at a morning shootaround, not enough time to make adjustments. None were needed as Jay Jay Chandler added 10 point, and the Aggies (8-6, 2-1) never trailed in winning their second straight.

Texas A&M took control from the start and held Vanderbilt to a season low in points. The Aggies scored the first seven on their way to a double-digit lead. They used a 17-3 run to take their biggest lead at 28-12 on a layup by Miller. Even as Texas A&M went through a scoring drought, Vanderbilt (8-7, 0-2) couldn't take advantage. The Commodores pulled within 32-20 on a 3-pointer by Saben Lee.

Nesmith had been one of only two players nationally to make seven or more 3s in a game four times this season as a 52.2% shooter outside the arc, and he had been Vanderbilt's best scorer in a half century since Tom Hagan averaged 23.4 points a game in the 1968-69 season.

Without Nesmith, Stackhouse started Lee who had been coming off the bench this season. Stackhouse also was forced to play three walk-ons. Braelee Albert arrived on campus in December but was on the court in the first half with Jon Jossell, a manager the past three seasons. Junior walk-on Isaiah Rice got on the floor in the second half.

“It was the perfect storm for us tonight,” Stackhouse said. “Not what we wanted to see with a team that was trying to find some continuity with some lineups and different things we had’t had to use before.”

“The statistics bear out that we can't shoot,” Williams said. “It changes our team when we’re able to make some shots.”

Vanderbilt: At least the Commodores' 3-point streak continues unabated. Pippen hit a pair of 3s in the first half to extend the school streak to 1,079 consecutive games for a 3 in every game played since the shot was added. ... The Commodores at least cleaned up some issues. The Aggies scored 12 points off seven Vandy turnovers in the first half but had just four off seven in the second half.