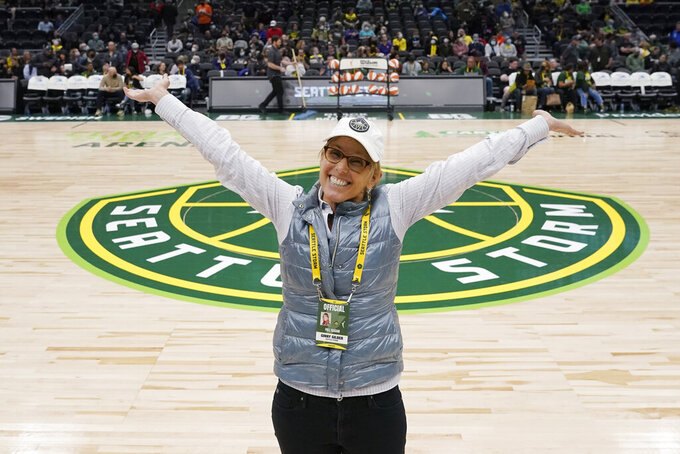 Seattle Storm co-owner Ginny Gilder poses for a photo on May 18, 2022 at Climate Pledge Arena during halftime of a WNBA basketball game between the Seattle storm and the Chicago Sky in Seattle. As Title IX marks its 50th anniversary in 2022, Gilder is one of countless women who benefited from the enactment and execution of the law and translated those opportunities into becoming leaders in their professional careers. (AP Photo/Ted S. Warren)

With the 50th anniversary of Title IX on the horizon, here's a look at some of the women who played college sports thanks to the law and capitalized on the opportunity off the field. Some women have used the competitive skills learned playing sports to become chief executive officers, commissioners and to launch their own companies:

Athletic Career: Dartmouth basketball, 1978-1982. She is still the school's career scoring and rebounding leader with 1,933 points and 1,635 rebounds in 89 games. Three-time Ivy League Player of the Year who led Big Green to the first of many league titles. Also Ivy League shot put champ four straight years, earning All-American recognition as a senior.

Business Career: Boudreaux earned an MBA at Columbia Business School and has led several businesses. She is a former CEO of United Healthcare and took over as president and CEO of Anthem, Inc., a Fortune 500 company, in 2017.

On Title IX: Boudreaux played for the Massachusetts state champions in basketball in high school who couldn't practice in their own gym. “We had to go to the middle school to practice so Title IX then wasn’t really being implemented," she said.

That's one reason paying it forward matters so much that Boudreaux endowed the women's basketball coaching position at Dartmouth. Her company also has partnered with four WNBA teams for community outreach programs.

Athletic Career: Two-time Olympian, 1980, 1984. She won the silver medal in rowing, 1984. All American rower at Yale, 1975-1979. Her most notable accomplishment as a rower in college may have been taking part in the famous “Yale Strip-In” to protest inequities in the treatment of men and women rowers at the school.

Business Career: Earned an MBA from Washington in 1991. Gilder founded Washington Works, a Seattle foundation focused on helping women receiving public assistance in the 1990s. Became CEO and founder in 2004 of Gilder Office for Growth, a family investment office. She remains a principal of the company. Managing member of Force 10 Enterprises, owner of Force 10 Hoops, the WNBA's Seattle Storm and Force 10 Sports Marketing.

On Title IX: “In my career, what I learned was it kind of doesn’t matter what the barriers are. Whether somebody thinks you can’t do something or shouldn’t be allowed to. If you want to do something, you kind of got to go for it."

Athletic Career: Gatorade National Player of Year, 1991. She played basketball at Notre Dame 1991-92, transferred to Tennessee, 1993-1996. Marciniak played in two national championship games, helping coach Pat Summitt win a fourth national title in 1996. She was the MVP of the 1996 Final Four. The point guard also played in the American Basketball League and three seasons in the WNBA.

Business Career: Recruiting coordinator and assistant coach for women's basketball at South Carolina, 2003-2008. She worked with coach Susan Walvius to found their own company SHEEX in 2007 using performance fabric material for bed linens and sleepwear. Marciniak remains co-CEO with Walvius. Their products are sold nationally with plans for more growth internationally.

On Title IX: Everyone who played for Summitt learned the history of Title IX, how the game had evolved and the history of those who came before. As Gatorade National Player of the Year, Marciniak shared a magazine centerfold with Chris Webber when both were playing for national titles in college.

“He lost theirs. We won ours at Tennessee. So then we go on to the pros, and Chris comes up with a $14 million salary. And my first salary I think ... was $21,000. We’re on the same path, right? We’re supposed to have the same, you know, equality. But the pay discrepancy was massive, and it still is.”

Athletic Career: Hampton basketball and volleyball, 1987-1991. She helped Hampton win the NCAA Division II basketball title in 1988 as freshman of the year. McWilliams was named player of the year for CIAA volleyball in 1990.

Business Career: Earned a master's at Temple, coached volleyball at Virginia Union and later was the first female assistant on a Central Intercollegiate Athletic Association men's basketball team. Worked in athletic administration at the CIAA as director of compliance and championships. McWilliams went to the NCAA in 2003 and worked her way up to director of championships and alliances. Hired in 2012 as the first Black female commissioner of the CIAA.

On Title IX: “I do think there’s still a way to go. I’d like to see more women, more women of color, Black women in roles of opportunity and having that access. And we still have work to do there.”

Business Career: Started as brand manager at Procter & Gamble, 1979. Consultant at Bain & Company. She was the vice president of strategic planning for the Walt Disney Company and then for DreamWorks, Procter & Gamble and Hasbro. As CEO of eBay Inc., she steered the fledgling startup from 30 employees in 1998 through 2008. Whitman took over as CEO for Hewlett-Packard in 2011. She oversaw the breakup of the company with Whitman continuing to lead HPE until stepping down until late 2017. Bought ownership stake with her husband in Cincinnati FC of MLS, 2019. President Biden nominated her as ambassador to Kenya in December 2021.

On Title IX: “I liked team sports the best. When I’m pulling a business team together, I still use those basketball aphorisms I learned as a young person: ‘Let’s pass the ball around a little before game time.’ ‘Do we need man-to-man or zone defense?’” Whitman wrote in her book, “The Power of Many.”