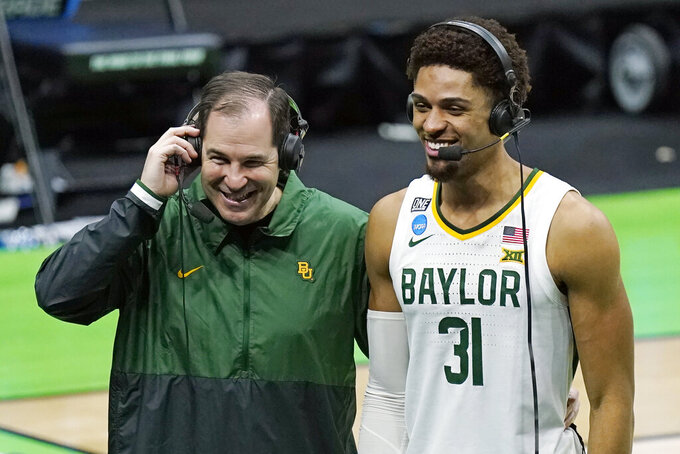 Baylor head coach Scott Drew and MaCio Teague (31) are interviewed after Baylor's win over Hartford in a college basketball game in the first round of the NCAA tournament at Lucas Oil Stadium in Indianapolis Friday, March 19, 2021, in Indianapolis, Tenn. (AP Photo/Mark Humphrey)

INDIANAPOLIS (AP) — Kelvin Sampson never set out to take a once-proud Houston program back to national prominence by leaning on transfers.

“Sometimes that’s just the way it works out,” Sampson said.

And there’s no reason to change that approach, either. Not after the transfer-led Cougars are back in the Sweet 16 for the second straight NCAA Tournament – making them one of multiple teams still alive in Indianapolis with a boost from players who started their college careers on other campuses.

“That’s just the way it is today,” Sampson said. “Thirty years ago, people that didn’t know what they didn’t know turned their nose up at transfers. They thought something was wrong with them. It shows you how little they knew though.

“Now, if you’re not taking transfers, you’re behind.”

That philosophy has worked for the Cougars (26-3), the No. 2 seed in the NCAA’s Midwest Region, in continuing the program’s best sustained run since the “Phi Slama Jama” days of Hakeem Olajuwon, Clyde Drexler and coach Guy Lewis in the 1980s.

The other top seeds in each region have transfers playing a key role, too, from top-ranked Gonzaga adding point guard Andrew Nembhard from Florida, to fellow No. 1 seed Baylor adding a third-team AP All-American in Davion Mitchell (Auburn) and MaCio Teague (UNC Asheville) as double-digit scorers.

“I think it all comes back to one thing, and that is knowing your team and knowing your culture: who’s going to fit in and represent your program the way you want it represented, if you bring in people that add to that,” Baylor coach Scott Drew said. “No matter which avenue you look to bring in someone, do they meet what you’re really looking for?”

In the case of No. 1 seed Michigan and No. 3 seed Arkansas, they’ve had transfers elevate their games to ensure their teams advance out of tough second-round matchups.

The Wolverines are playing without senior forward Isaiah Livers, who is out indefinitely with a foot injury. They needed and got a big game from Wake Forest transfer Chaundee Brown Jr., against LSU, with the 6-foot-5 senior scoring a season-high 21 points to exceed his output from the previous three games combined.

The Razorbacks, meanwhile, have five transfers among their top nine players – earning the nickname “Transfer U” from Sampson. That group includes Indiana graduate Justin Smith, a 6-7, 230-pound forward who enters the Sweet 16 having gone from reliable contributor to the Razorbacks’ best player of late.

“I certainly think that NBA teams are taking note of his play,” Arkansas coach Eric Musselman said. "We’ve gotten several calls of people just inquiring about him as a player.”

Smith has three straight 20-point games after having just two all season. He had 29 against Colgate and 20 more against Texas Tech, a game that also saw him successfully defend Texas Tech’s final shot to help secure Arkansas' first trip to the Sweet 16 in 25 years.

“He just does so many great things on the court on both sides of the floor,” said teammate Jalen Tate, a graduate transfer from Northern Kentucky. “He offensive rebounds with the best of them. He’s an exceptional athlete. He can move his feet and guard 1 through 4 or 1 through 5. … I think a lot of the younger guys, even some of the vets, look to him for a lot of direction.”

Sampson's seventh team enters Saturday's game against 11th-seeded Syracuse as the Midwest's top remaining seed. A win would put the Cougars in their first regional final since 1984, when Olajuwon led Houston to a second straight NCAA title game before falling to Patrick Ewing and Georgetown.

Rosters were built differently then, with top players sticking around college for three and four years. Now players are on move much quicker — and Sampson's ready for it.

“There’s no wrong way,” Sampson said. “There’s only your way – whatever you believe in and it works, then that’s a good way.”