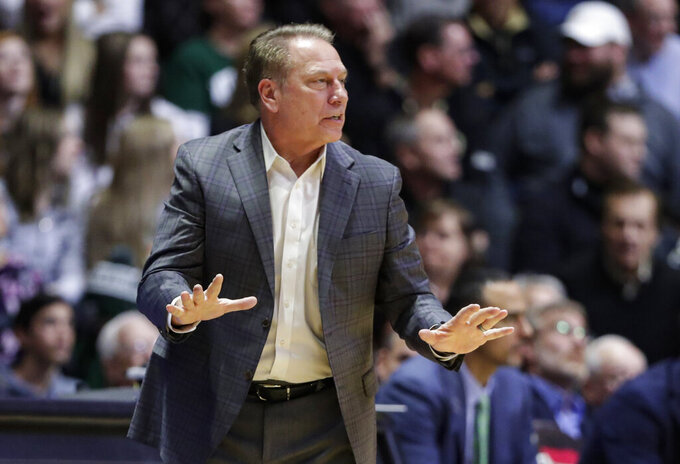 DURHAM, N.C. (AP) — Rocket Watts scored 20 points and Julius Marble had a career-high 12 to help No. 8 Michigan State beat No. 6 Duke 75-69 on Tuesday night in the Champions Classic.

The Spartans (3-0) closed the first half with a 13-4 surge to take a 37-33 lead at halftime. They maintained control in the second half with a balanced offense to go with their aggressive defense and rebounding.

“They are able to play at a consistently higher level than us due to their depth right now," Duke coach Mike Krzyzewski said.

The Blue Devils (1-1) led 13-3 before struggling to make shots or get stops. Duke shot just 32% from the field and allowed five Spartans to score in double figures.

“At the end of the half, I thought we got a little fatigued, I guess tired, and they took that lead," Krzyzewski said. “Then at the start of the second half, we didn’t meet their level of intensity like we should.”

“We rode him like a horse," coach Tom Izzo.

Matthew Hurt had 21 points and 13 rebounds for Duke, but freshman Jalen Johnson was limited to 11 points on 4-of-11 shooting after scoring 24 in his college debut. Jaemyn Brakefield scored 11 and Jordan Goldwire had 10 points for the Blue Devils.

Michigan State: Izzo improved his coaching record to 3-12 against the Blue Devils.

“I’m going to smile and enjoy it because I haven’t done a very good job against Duke," Izzo said. “It’s been one-sided, so this is one step in the right direction.”

It was also the Spartans' first win at Duke, which didn't have its raucous fans at Cameron Indoor Stadium due to the coronavirus pandemic.

“I’m not going to put this as an asterisk," Izzo said.

Duke: Settling for jump shots proved to be a problem because they simply were not falling all night for the Blue Devils, who missed 14 of their first 15 3-pointers and finished 5 of 25 beyond the arc.

“The thing that we did not do was finish," Krzyzewski said.

Michigan State should continue to climb in the AP Top 25, while Duke might slip a bit.