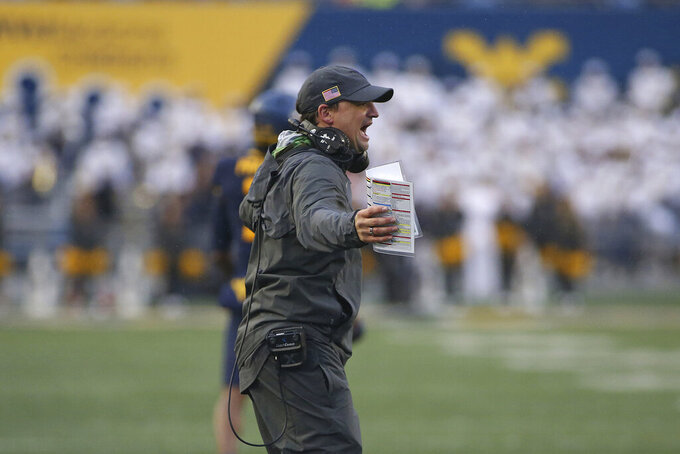 MORGANTOWN, W.Va. (AP) — West Virginia announced the firing of athletic director Shane Lyons on Monday, a move that comes amid the worst stretch for the football team in more than four decades.

President Gordon Gee said there were no immediate plans to make changes under coach Neal Brown.

Lyons is gone after nearly eight years. Gee said in a statement that Rob Alsop, WVU's vice president for strategic initiatives, has been named interim athletic director while a search is ongoing for Lyons' replacement.

In September, after West Virginia started the football season 0-2 and fans turned up their criticism of Brown, Lyons said he would take a wait-and-see approach for the remainder of the season.

Fans also had criticized Lyons’ move to give Brown a contract extension following a 6-4 record in 2020, his only winning season.

"The evaluation of the football program will be the first task of our new athletic director and no changes will be made until that review has been completed.”

Lyons was hired in January 2015 to succeed Oliver Luck. He previously served as deputy athletic director at Alabama and as associate commissioner of the Atlantic Coast Conference.

Lyons is a Parkersburg native who earned bachelor's and master's degrees in sport management at West Virginia. When Lyons was hired, Alabama football coach Nick Saban, another West Virginia native, said that Lyons “understands that passion and what the Mountaineers represent.”

But with the fan base in an uproar over the football program, patience in the administration waned.

“I deeply appreciate Shane’s leadership over the past eight years and I wish him well,” Gee said. “But with the ever-changing landscape of intercollegiate athletics, I believe this is an opportunity to bring a fresh perspective to our program.”

The football team under Brown has yet to be ranked in the AP Top 25 poll and has failed to finish higher than fifth in the Big 12.

“I know there’ll be some speculation that this is the first shoe of two shoes to drop,” Alsop said at a news conference later Monday. “But I just want to disavow that. This is an independent decision."

Alsop said he was not a candidate for the permanent athletic director's position.

“The past few years of college athletics have seen a lot of change,“ Alsop said. ”We’ve seen from the portal to name, image and likeness, to another round of conference realignment. President Gee in thinking about this decided that with this ever-changing landscape that it will be a good opportunity to find a fresh perspective for the program."