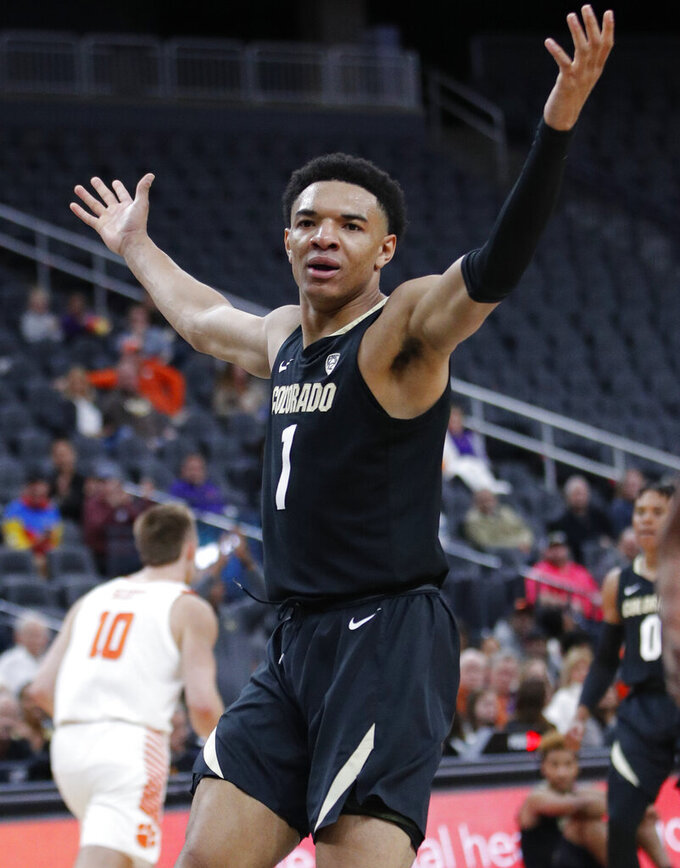 Colorado's Tyler Bey (1) celebrates after a play against Clemson during the second half of an NCAA college basketball game, Tuesday, Nov. 26, 2019, in Las Vegas. (AP Photo/John Locher) 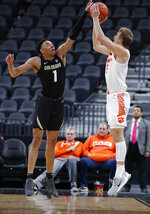 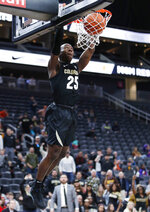 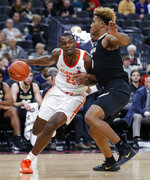 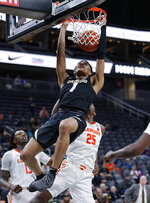 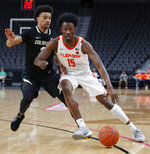 The 6-foot point guard worked extensively during the offseason, and since the start of this season said he's keyed in on his defensive efforts with hopes of earning a first-team selection at the end of his junior campaign.

Wright made two key steals Tuesday night, teammate Tyler Bey had 18 points and 11 rebounds, and No. 21 Colorado overcame a 12-point deficit to defeat Clemson 71-67 in the championship game of the MGM Resorts Main Event.

"This is going to help us because it's a quality opponent. Offensively they run great stuff, defensively they switch man and zone to try to keep us off balance and I thought they did a good job of that," Colorado coach Tad Boyle said. "Our guys did a good job of not letting it kind of frustrate them. We've certainly got a lot of room for improvement on the offensive end."

The defense, however, is one of the best in the nation through the first month of the season.

Colorado (5-0) struggled shooting, including a 7-for-21 stretch to open the second half, but was able to capitalize on four turnovers to take its first lead with 7:52 left, when Wright stole the ball from Tevin Mack and punctuated the breakaway with a two-handed dunk that energized the crowd.

The Buffaloes built their lead to 69-63 before Clemson made a late run.

Clemson had a chance to win in the final seconds, but Wright stripped freshman Al-Amir Dawes, drew a foul and sank two free throws to seal it.

"I just really try to take that game to another level," Wright said. "That steal and the dunk was a momentum changer for us. The steal at the end, we knew they were trying to get a 3 up to take the lead and I just did the best I could to contain him and keep him in front of me. My hands were just quick enough at that one point to get the strip."

D'Shawn Schwartz scored 12 points, Evan Battey added 11 and Wright chipped in with 10 for the Buffaloes, who are 5-0 for the second time in three seasons.

"I thought we ran out of gas a little bit. Give Colorado credit, their kids competed hard for the full 40 minutes," Clemson coach Brad Brownell said. "We controlled the game for a good bit, and I thought we had a little bit of trouble at one point and got a little tired. And their good players, McKinley Wright and Bey, just made a couple of winning plays down the stretch.”

Brownell said the final play was intended for Newman, a sophomore, but he opted to pass the ball to Dawes.

"I'm not sure why he didn't shoot that. We set it up, kind of got it to where we thought he could get a shot and they defended it pretty well," Brownell said. "That's part of our growth process. We have to have some guys step up. We lost four seniors who started a lot for us and kind of took all those shots. Now we've got to develop some younger guys into that position where you're excited to shoot that."

While Wright's two steals were vital, Bey delivered for Colorado at the right time as well. With 3:53 left and starting power forward Battey on the bench with four fouls, Bey's monster block on Simms at the rim prevented Clemson from extending its lead to 65-62. Instead, Schwartz hit a 3-pointer at the other end to give the Buffaloes a 65-63 advantage.

Bey, who attended Las Vegas High School, was chosen the tournament MVP after posting his fourth double-double of the season. He had 11 points and 19 rebounds against Wyoming in Sunday's semifinal. "I got to play in front of my fam, my mom especially," Bey said. "She doesn't get to see me play much, so it was a great opportunity to go out there and show her what I'm about and how good her son is."

Colorado: The Buffaloes' early calling card this season has been their defense, allowing 54.5 points per game. In their previous three games they permitted 49 per outing. Clemson, their toughest opponent to date, had 49 points by the 14:39 mark of the second half. The Tigers reached 54 with 7:41 left.

Colorado climbed two spots in the http://collegebasketball.ap.org/poll this week after going 2-0 against UC Irvine and Wyoming and will likely move up a spot or two again barring an upset at the hands of Sacramento State on Saturday.

Clemson: Plays at Minnesota on Monday, opening night of the ACC/Big Ten Challenge.