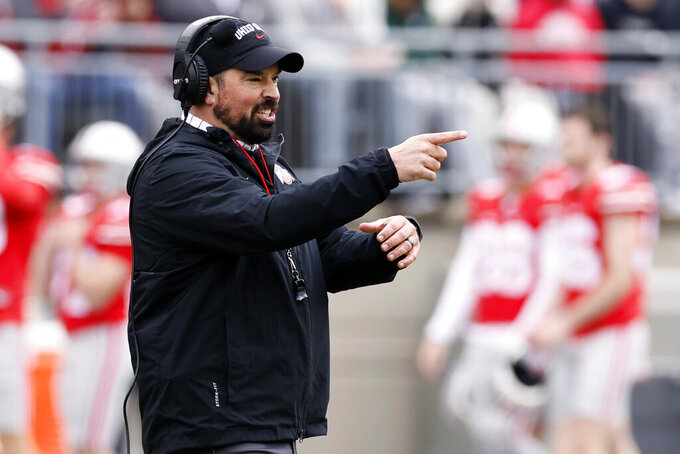 Ohio State is hiking Ryan Day's annual salary to $9.5 million as part of a two-year contract extension that will put him among the nation's highest-paid college football coaches.

Day’s raise makes him the latest coach to crack $9 million per year, making him one of the highest-paid coaches along with Alabama’s Nick Saban and Clemson’s Dabo Swinney and putting his contract in line with recent deals given to Michigan State’s Mel Tucker and LSU’s Brian Kelly.

The extension, which was to get formal approval by university trustees on Wednesday, bumps up the 43-year-old Day's total salary package about $2 million annually and would keep him in Columbus at least through the 2028 season.

Day was appointed as the successor to Urban Meyer when Meyer retired after the 2018 season. In three seasons, Day has led the Buckeyes to a 34-4 record, including 23-1 in the Big Ten. His teams have won two Big Ten championships and made two appearances in the College Football Playoff.

In the classroom, Day's program has had four consecutive semesters with a team cumulative grade-point average of at least 3.00, the university said.

The university also increased the salaries of four other coaches, including men's basketball coach Chris Holtmann, who will get a three-year extension and an annual salary bump of $500,000 that pushes his annual package to about $3.5 million.

Under the three-time Naismith Coach of the Year finalist, the Buckeyes have compiled a record of 107-56, including a 59-40 Big Ten mark. They have won at least 20 games in all five seasons and have advanced to the NCAA Tournament in every year it was held during Holtmann's tenure. Ohio State is one of just three Power 5 teams to win 20 games in each of the last five years, along with Kansas and Oregon.

Women's basketball coach Kevin McGuff will get a new four-year contract with total annual compensation of $1.05 million. The contract starts July 1 and extends through the 2025-26 season.