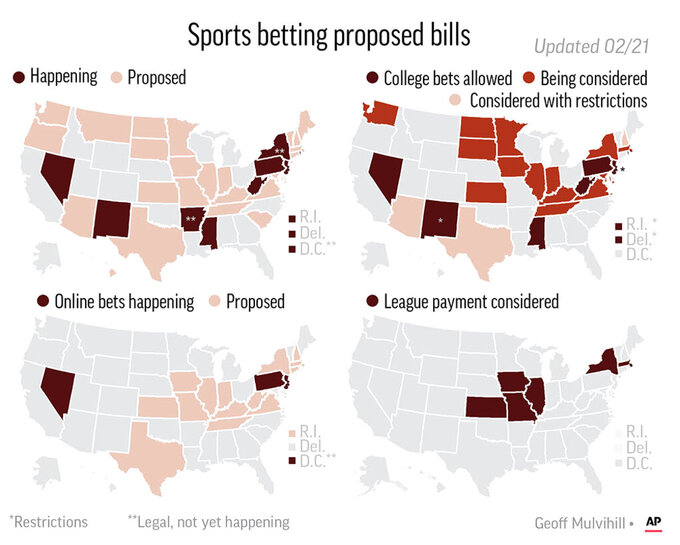 Kentucky's public employee pension system, $39 billion in the red, is among the worst-funded retirement plans in the country and has vexed lawmakers for years as they sought a solution.

Several bills introduced this year would legalize it in the state, a step made possible by a U.S. Supreme Court decision last May that ended Nevada's monopoly. A portion of the money the state would take in would go toward plugging the gap in the underfunded pension system.

"I think there's a lot of folks, particularly Democrats, who campaigned on finding revenue," he said.

Kentucky is one of at least 22 states where lawmakers this year are considering legislation to legalize sports gambling. Seven states joined Nevada and legalized it last year after the Supreme Court's decision.

Lawmakers say they are eager to ensure their state can regulate a practice that has long operated in the shadows and to get a slice of the action, even if the expected tax revenue is relatively modest.

An Associated Press review of all sports gambling bills introduced this year — more than 100 so far — found high interest among lawmakers, but also many questions about how legalized sports betting would be handled. Casino companies, sports leagues, fantasy sports companies and others are lobbying lawmakers in the hopes of getting the legislation tailored to their liking.

Among the details being debated: How will sports gambling be regulated and taxed? Where will sports gamblers be allowed to place their bets? Should betting be allowed on a state's college teams? And how should the state spend its share of the tax money?

Tapping another source of state revenue has been a key motivator for many lawmakers and governors who are supporting legalization. On Wednesday, Illinois Gov. J.B. Pritzker, a Democrat, proposed a budget that relies on legalizing sports betting and marijuana to help pay down tens of billions of dollars in pension debt. Connecticut Democratic Gov. Ned Lamont and New Hampshire GOP Gov. Chris Sununu, made similar calls for sports betting legalization in their recent budget addresses.

That optimism will likely be tempered by reality: Sportsbooks have profit margins around 5 percent, and the state's cut is usually a sliver of that. In states that have projections on how much legalized sports betting would bring in, even the most optimistic numbers amount to a fraction of 1 percent of their state budgets.

An analysis of the Kentucky bill found that taxes on sports betting — set at 10.25 to 14.25 percent of the sportsbooks' winnings — could bring the state $20 million annually in revenue. The estimate climbs to $48 million if neighboring states don't follow suit, which isn't likely. West Virginia legalized sports betting last year, and it's being considered in every other state that borders Kentucky.

The modest revenue projections— less than 1 percent of the state's overall budget — and caution over legalizing another form of gambling have raised concern among some lawmakers and interest groups, who say the bill's passage is not assured.

State Rep. Chris Fugate, a Republican who represents an eastern Kentucky district, is one of several lawmakers who question whether legalizing sports betting is worth it because of the potential social cost.

"We are known for being in the top 10 of opioid addiction," he said. "And now the state, or some people in the state, wants to put more vice out there to make our kids not be provided for even more."

Kent Ostrander, executive director of The Family Foundation, a socially conservative Kentucky group, has been pushing against legalization.

"I think there is a moral component to it, but our argument is economic," he said. "The state should cause families to thrive, not prey on them for revenue and give licenses to others, to an elite group of others, to prey on."

Other lawmakers, in Kentucky and elsewhere, say betting on sports was already happening under the radar well before the Supreme Court opened the door to legalization in the states. Why not tax it, regulate it and reap some of the money for education, infrastructure, pensions or even to treat addiction?

Whether to allow betting on college sports is among the provisions lawmakers in several states are considering.

All the states that have so far legalized sports betting allow it, although some have restrictions. Delaware and New Jersey, for example, prohibit betting on games that involve in-state colleges.

The fear of college athletes cheating is rooted in a history of scandals dating to the 1950s, including point-shaving cases in the 1980s and early 1990s.

A Massachusetts bill that has the support of the governor would ban betting on college sports, mirroring a current state law on fantasy sports.

"It's not like going to Duke or any of these big colleges," he said. "In New Hampshire, you have pretty good access to these players."