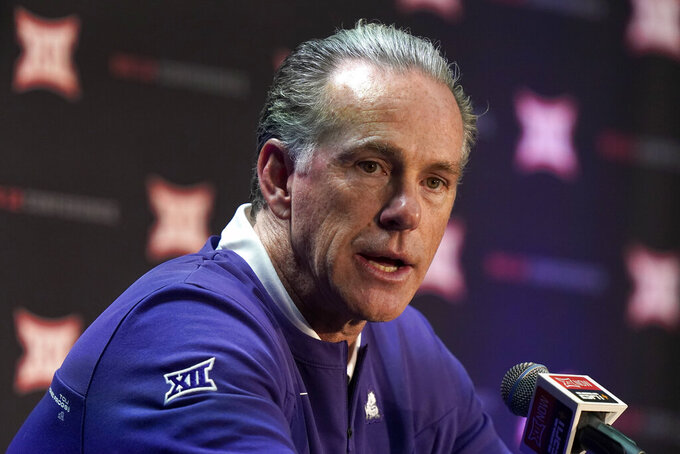 FORT WORTH, Texas (AP) — Jamie Dixon has altered his approach to putting together a team after his first losing season as a head coach, and in an era with so much change in college basketball.

TCU has added eight transfers to its roster since last season, when the Horned Frogs went 12-14. That came a year after a 16-16 record that was the first non-winning season for Dixon, who was Pittsburgh's coach for 13 seasons and is now going into his sixth at his alma mater.

“Obviously we weren’t quite in the transfer mode the last couple years. I think when I came to TCU, obviously playing there, the type of school we are, transfers was not probably the way I thought we would go,” Dixon said. “It’s a new era. It’s a new time. Now I’ve embraced it. Certainly we did this summer. You just try to improve yourselves. We certainly did with the transfers.”

The Frogs have only four returning players, with sophomore guard Mike Miles Jr. and senior forward Chuck O'Bannon Jr. the only starters back. Junior guard Francisco Farabello was limited to nine games because of COVID-19 protocols, and 6-foot-11 center Eddie Lampkin Jr. played only 10 games as a true freshman.

As for the incoming transfers, there are two forwards who led their respective conferences in field goal percentage. Emanuel Miller shot 57% at Texas A&M in the Southeastern Conference, and Xavier Cork shot 64% at Western Carolina in the Southern Conference.

“I’m excited about our group. I mean, we have 12 good players, guys that belong in the Big 12. Might be the deepest group,” Dixon said. “Now, we have to stay healthy. That certainly hasn’t happened in any of the five years I’ve been here. ... I think we can have some good depth year, unlike any year we’ve had.”

Guard Maxwell Evans was a four-year starter at Vanderbilt, and Michael Peavy started 25 games as a freshman at Texas Tech. Damion Baugh played for NIT champion Memphis, 6-7 forward JaKobe Coles was limited to six games at Butler because of a knee injury, and guard Shahada Wells averaged 16.8 points as a freshman at Texas-Arlington. Souleymane Doumbia, the 6-11 transfer from Navarro College, was rated by some as the top JUCO center.

"We’re getting better every day,” Miles said. “I thought it was going to be hard with so many new faces, but it’s been an easy transition. All of the guys listen and everyone wants to win. Practice is way more competitive than it was last year. In the locker room, we laugh and joke. We all like each other.”

This is the second year in a row with significant roster changes for TCU. There were seven newcomers last season, but only two of those were transfer players.

GO FOR THE GOLD

Miles played this summer for the gold medal-winning FIBA U19 World Cup team coached by Dixon, and the guard had 11 points and four steals with no turnovers in 30 minutes in the championship game. He averaged 13.6 points, 3.5 rebounds and 3.1 assists while starting 21 games as a TCU freshman.

“He was kind of a little bit under the radar coming out of high school. A little bit of a surprise with how good a freshman year he had to some from outside,” Dixon said. “He clearly established himself (with the U19 team) as one of the best guards, if not the best guard. ... I saw the growth there.”

Dixon said Miles has improved on conditioning, and that the body of the 6-2 guard has changed since being “a little chunky” when getting to TCU.

The Frogs will open the season with three home games in eight days, with their opener Nov. 11 against McNeese State. They will play Utah on Dec. 8 in Dickies Arena, only a few miles from the TCU campus and the site of an NCAA regional next March. They will ring in 2022 with a New Year’s Day game at No. 3 Kansas in their Big 12 opener.