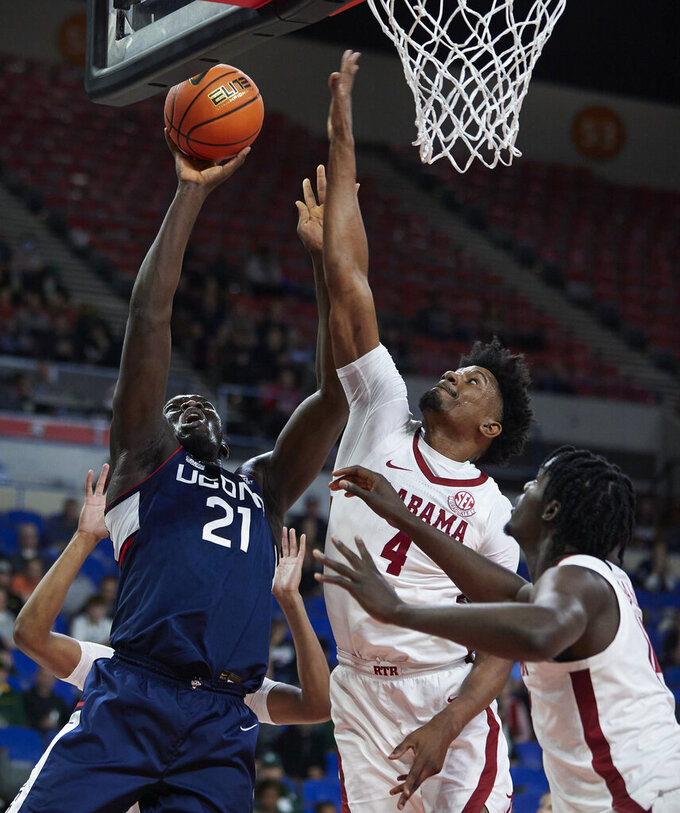 PORTLAND, Ore. (AP) — Dan Hurley is ready for his UConn team to graduate from stockpiling victories and start winning some titles, even in early season tournaments.

The Huskies will get their chance Sunday.

Adama Sanogo scored 11 of his 25 points during a decisive run midway through the second half and No. 20 UConn pulled away for an 82-67 victory over No. 18 Alabama in the semifinals of the Phil Knight Invitational on Friday night.

UConn will face Iowa State in the championship game, while Alabama will take on No. 1 North Carolina in the third-place game Sunday.

“The whole mindset of our program this year is like we’ve been contending the last couple of years," Hurley said. "Contending in the Big East. Contending in tournaments. We're trying to go from contenders to champions and we get a chance to do that on Sunday.”

While whistles calling fouls was the dominant sound most of the night, the cheers of the UConn crowd took over in the final 10 minutes as Sanogo and the Huskies finally created some separation. The 6-foot-9 forward helped UConn (7-0) turn a 50-50 tie into a 63-53 lead with 5:32 left. Sango punctuated the 13-3 surge with a fast-break dunk and a 3-pointer.

UConn wasn’t done. Tristian Newton added another 3-pointer out of a timeout, Sanogo scored in the lane to stretch the lead to 15 and Alex Karaban capped the run with a 3-pointer to give the Huskies a 71-54 lead with under four minutes remaining.

Sanogo was averaging nearly 20 points per game and topped the 20-point mark for the fourth time in seven games. Jordan Hawkins added 16 points, Karaban had 12, and Joey Calcaterra scored 10 off the bench and helped spark a first-half run when the Huskies built a 15-point lead.

Brandon Miller led Alabama (5-1) with 18 points and Jaden Bradley added 12. But it was a sloppy performance from the Crimson Tide that included 21 turnovers, 16 in the first half.

“First half, turnovers killed us,” Alabama coach Nate Oats said. “We did a good job, I thought we showed fight getting back and tying the game up a couple different times in the second half, and we just fouled too much."

The Crimson Tide trailed 33-18 late in the first half and pulled even four times in the second half. But Alabama never led after it was 3-2 in the opening minutes.

The teams also went to the foul line -- a lot. There were 47 combined fouls and UConn was 17-for-18 at the foul line in the second half.

Hurley and Oats have a long history as friends, dating to when Hurley recruited E.C. Matthews from Romulus High School in Michigan to Rhode Island 10 years ago. The head coach at Romulus was Oats.

“I usually bend my stuff into a pretzel leading up to some of these games where there’s these six degrees of separation or whatever,” Hurley said. “But I just looked at it when they won last night just kind of how cool and how great of an honor it would be to share the court with Nate with our history, our friendship.”

UConn: The Huskies valued their offensive possessions in the second half. After 10 turnovers in the first half, UConn had just two in the final 20 minutes. That kept Alabama from getting out in transition.

Alabama: The Tide were trying to start 6-0 for the first time since 2012-13 season. They were leading the country in rebounds per game but ended up having just a 35-32 advantage on the glass against the Huskies.