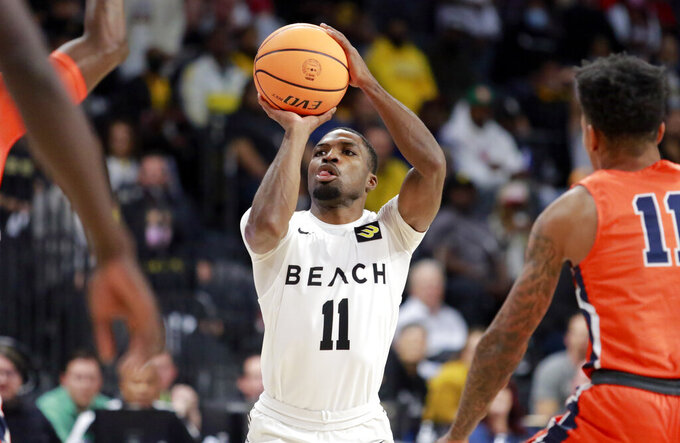 Long Beach State guard Joel Murray (11) lines up a shot during the first half of the team's NCAA college basketball game against Cal State Fullerton for the championship of the Big West Conference men's tournament Saturday, March 12, 2022, in Henderson, Nev. (AP Photo/Ronda Churchill) 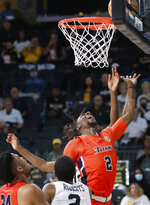 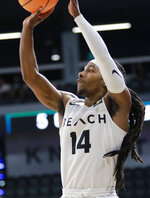 The Titans, who have won four games in a row, clinched a berth into the NCAA Tournament for the first time since 2018.

Tobias Rotegaard and Jadon Jones sandwiched 3-pointers around a jumper by Joel Murray to give Long Beach State a 54-50 lead midway through the second half but Anosike scored nine points and Harris the other five as CSU Fullerton answered with a 14-2 run to take an eight-point lead about 5 minutes later and the Titans led the rest of the way.

Jones hit a 3-pointer to pull the Beach within a point with 38 seconds left and, after the teams traded turnovers, Milstead was fouled and missed the front end of the 1-and-1 with 19 seconds left but Latrell Wrightsell Jr. poked away the ball at the other end and Long Beach State failed to get off a potential winning shot in the closing seconds.

Slater scored 13 points, including three 3-pointers, as Long Beach State jumped to a 29-15 lead with 4:37 left in the first half but Maddox scored eight points and Anosike added six in a 17-2 run that gave the Titans a one-point lead at the break. Maddox converted a three-point play with 55 seconds left and Wrightsell stole a pass and found Maddox for a 3-pointer to make it 32-31 just 20 seconds later.

Wrightsell and Fullerton's Jadon Jones were called for a double technical in the closing seconds of the first half.