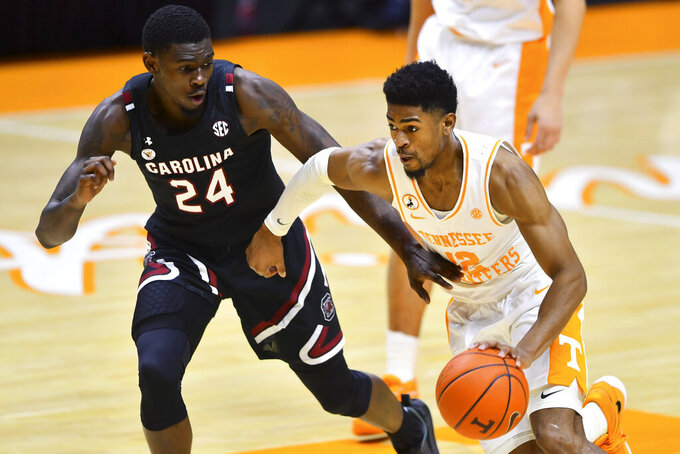 Victor Bailey was a big part of the Volunteers' response.

Bailey connected on 7 of 10 3-pointers and scored a career-high 29 points to lead No. 19 Tennessee to a 93-73 victory over the Gamecocks on Wednesday night.

The game was originally scheduled for Tuesday, but what turned out to be a false positive COVID-19 test for a Tennessee player led to a one-day postponement.

John Fulkerson scored 15 of his 19 points in the second half, Jaden Springer added 16 points and Yves Pons had 10 for the Volunteers (15-5, 8-5 Southeastern Conference).

Tennessee expanded its 11-point halftime lead to 89-69 late in the second half thanks to a 17-7 run. Bailey had nine points in the burst and Fulkerson had eight.

“We can't stop the bleeding when it starts,” South Carolina coach Frank Martin said. “The biggest problem is that we have no personality on defense. We gave up another career high. The desire to defend and sustain effort is not what it needs to be.”

Bailey had struggled in recent weeks after a strong start to the season.

“Sometimes when a player stops thinking about making shots and just plays, the shots go down,” Tennessee coach Rick Barnes said. “All we ask him to do, like anyone else, is to ‘Do what you do and trust each other. Play to your strength.’”

“I've tried to stay resilient,” Bailey said. “I've stayed focused on my work. It's tough to put in the work when you're not seeing the results.”

Bailey hit 4 of 7 3-pointers and had 14 points to lead Tennessee to a 50-39 halftime advantage. Spring connected on a buzzer-beater jumper to score 10 in the opening half. The Vols were good on 6 of 13 3-pointers in the first 20 minutes.

Tennessee has scored 80 or more points in three of its last four games. However, Barnes saw a lot of room for improvement.

“If we don't make the turnovers like we did (16), we'd be much better,” the coach said. “There are things we have to clean up.”

One area that improved was the Vols scoring 16 points in transition.

If the positive COVID-19 test result for a Tennessee player had not turned out to be false, the Volunteers would have been missing four players because of subsequent contact tracing. But all tests came back negative on Monday, Tuesday and Wednesday, meaning all four players were cleared to play under SEC rules, the university said.

South Carolina: The Gamecocks dropped their fourth straight. After Saturday's loss to Ole Miss, Bryant said: “Three losses in a row is just the outcome of us playing single basketball and not team basketball.”

Tennessee: Finding consistency is the Vols' mission heading into the postseason. That starts with veteran big men Pons and Fulkerson playing up to the expectations they had at the start of the season.

“We need them both to be aggressive,” Barnes said. “Not just on offense, but defense, too. They need to be involved and be engaged, playing with some force.”

South Carolina: Hosts Missouri on Saturday. The Gamecocks have had eight games affected by the pandemic.