Battle of Illinois highlights 2nd round in NCAA Midwest 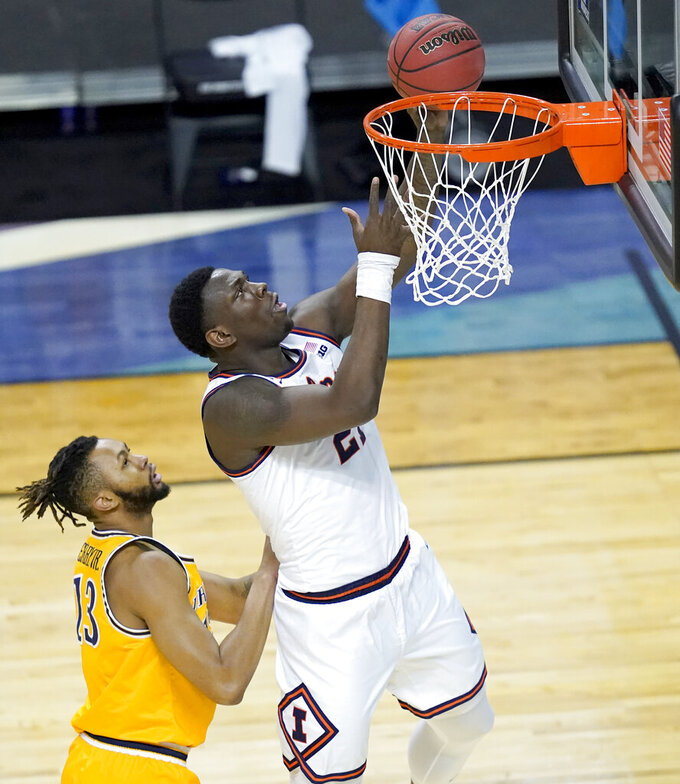 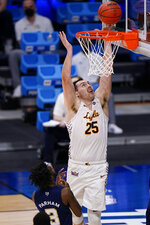 One second-round game in the Midwest Region will be a battle for bragging rights in the state of Illinois.

The top-seeded Fighting Illini, in the tournament for the first time since 2013, will face eighth-seeded Loyola Chicago, which busted countless brackets by reaching the Final Four in 2018.

Big men figure to be the stars with Illinois featuring 7-foot, 285-pound second-team All-American Kofi Cockburn among a star-studded roster and the Ramblers led by 6-9, 255-pound Cameron Krutwig.

That is, of course, if you don’t count the Ramblers’ beloved 101-year-old team chaplain, Sister Jean.

The Illini advanced by muscling past Drexel 78-49 on Friday, and Loyola outlasted Georgia Tech 71-60.

Despite his obvious physicality, Cockburn showed some deft footwork around the basket — he has a background in soccer and track — as he made 8 of 11 shots and grabbed five rebounds.

That's scary, considering Cockburn arrived in New York City from Jamaica in 2015 and played organized basketball for the first time as a freshman for Christ the King Regional High School in Queens, which has produced a long list of hoops heroes. For his senior season, he transferred to Oak Hill Academy in Mouth of Wilson, Virginia, a boarding school with a track record as a finishing school for top recruits.

The Ramblers may learn their biggest foe is not even their most dangerous. That designation goes to Ayo Dosunmu, a first-team All-American who had 17 points, 11 rebounds, six assists and no turnovers.

But Loyola has a history on this stage. The Ramblers beat a Yellow Jackets team that was missing Atlantic Coast Conference player of the year Moses Wright — who remained in the team hotel while in coronavirus quarantine — but still shot 60% overall.

Krutwig, a senior, leads Loyola in scoring at 14.9 points per game, rebounding (6.7) and is second with 82 assists. Ramblers coach Porter Moser has a healthy respect for the challenge that awaits his team.

“There’s a huge amount of passion for basketball in the state of Illinois,” he said. “It’s been that way for decades. ... To see two ranked teams go at it to get a ticket to the Sweet 16 is great for the state.”

The Ramblers’ Lucas Williamson doesn’t want to get caught up in bragging rights.

“I do have Chicago roots, but at the end of the day, this is March Madness. I’m just trying to survive and advance,” he said. “I’m just focused on whoever is in front of us and it just happens to be Illinois.”

Oregon State began the season picked 12th in the Pac-12 and seems to have adopted the number.

The Beavers (18-12), also seeded 12th in the region, are moving on to face fourth-seeded Oklahoma State after becoming the 51st No. 12 seed to pull a first-round upset, beating Tennessee 70-56. The Cowboys survived a scare from Liberty to win 69-60 later Friday night.

Oklahoma State might want to keep a close eye on Roman Silva. The 7-1 senior made all eight of his field-goal attempts and scored 16 points for Beavers, who won their first NCAA Tournament game since 1982.

The Vols (18-9) were trying to make a go of it without John Fulkerson, sidelined with a facial fracture and concussion sustained when he took a pair of elbows to the face from Florida’s Omar Payne in the SEC Tournament. The incident prompted Florida coach Mike White to keep Payne out of the Gators' 75-70 win over Virginia Tech.