Brockington scores 26 as No. 23 Iowa St outlasts OSU in OT 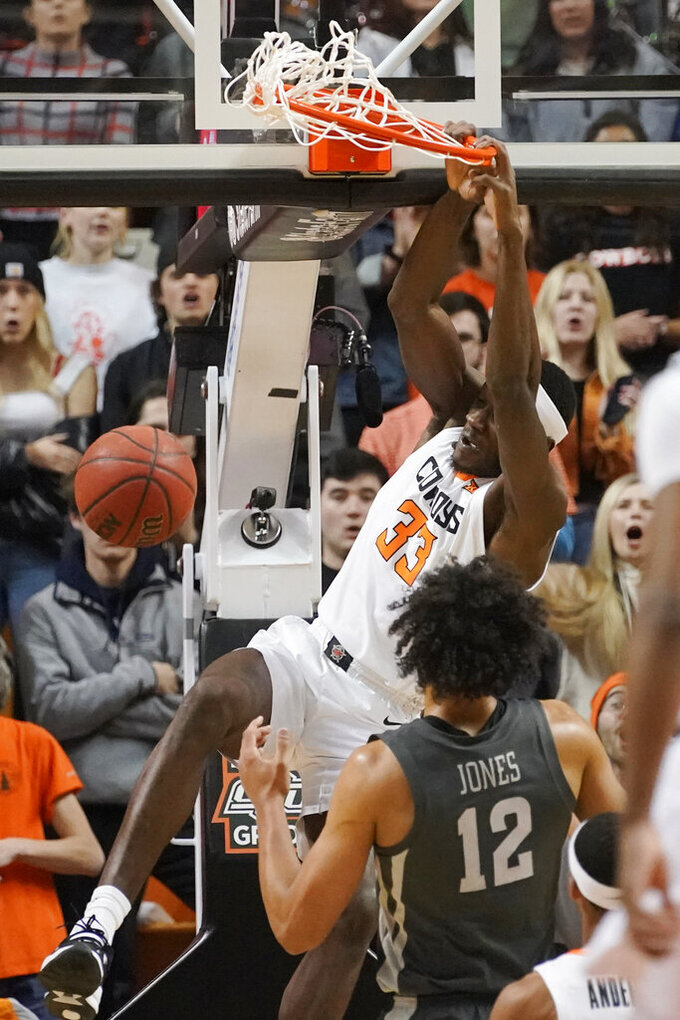 “Just really motivated by wanting to show up for my team," Brockington said. "Really didn’t want to come up short this game. We had played so hard. I was tired of losing.”

Avery Anderson scored a career-high 34 points for Oklahoma State. He went 9 of 16 from the field and made 11 of 13 free throws.

“He was terrific," Iowa State coach T.J. Otzelberger said. "I mean, man. He’s just a guy who made big shot after big shot, big play after big play, Lived at the foul line. He was a resilient competitor. You want to have games where you play against guys that play really well and still be fortunate to come out with the win.”

The game had 28 lead changes and was tied 15 times. Neither team led by more than four points.

In overtime, Anderson made a pair of free throws with 19.7 seconds left to cut Iowa State's lead to 82-81, and the Cyclones turned it over with 15.4 seconds remaining to give Oklahoma State a chance. Moussa Cisse's putback dunk appeared to give the Cowboys the lead, but offensive goaltending was called and the ruling was upheld after a replay review.

Tre Jackson hit two free throws with 11 seconds left to put Iowa State up 84-81. Keylan Boone missed a 3-pointer for Oklahoma State, and Anderson missed a 3 at the buzzer that would have forced another overtime.

A steal and dunk by Likekele with 34.5 seconds left in the first half gave Oklahoma State a 35-34 lead that held until the break. The Cowboys led despite 14 points by Brockington.

The game was tight throughout the second half. Brockington drained a contested jumper with Likekele in his face to tie the score at 70 with 20 seconds remaining.

“I’ve got to be able to get those stops," Likekele said. “Me personally, I feel like I can’t allow their best player to come in and hit a crunch-time bucket like that to tie it up. So, yeah, I’m actually very frustrated about that.”

The teams traded turnovers, and Oklahoma State had one last shot in regulation, but Anderson missed a deep 3-pointer at the buzzer.

“Those guys (Oklahoma State), they are a tough, competitive group,” Otzelberger said. "They’re playing really hard for their coach. Just proud of the guys that they stuck together, stayed the course and found a way to come out with a win.”

Iowa State: The Cyclones went just 8 of 16 on free throws, but made two critical ones late in overtime. They likely won't get away with shooting that poorly from the line often in the Big 12.

Oklahoma State: The Cowboys, normally a shutdown defensive team, struggled to get to perimeter shooters at times and allowed Iowa State to make 12 3-pointers.

Anderson hadn't scored more than 12 points in a game since Dec. 13 against Cleveland State. He shot 5 for 11 on 3-pointers, shattering his previous highs of three 3-pointers made and six attempted.

“I just tried to go out there and be aggressive and really just try to get myself going,” Anderson said. “But I know whenever I get myself going, the team is going a lot, too, and it makes it much easier for everybody on the floor.”

Likekele on trading baskets: “It’s fun for the fans. It ain’t fun for us.”

Oklahoma State: Plays at Florida on Saturday in the Big 12/SEC Challenge.