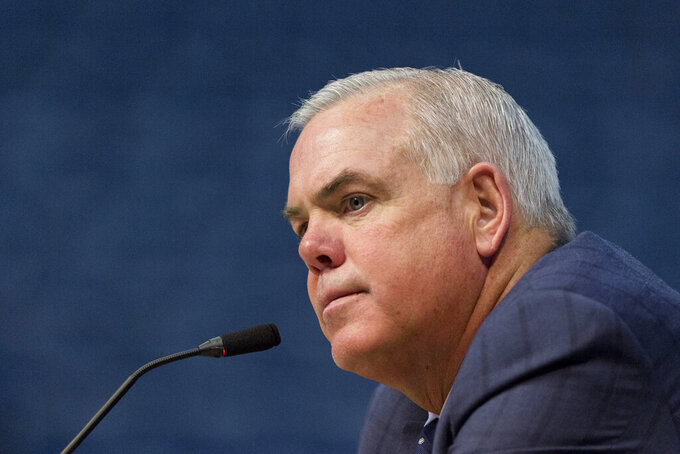 PROVO, Utah (AP) — Dave Rose is stepping down as BYU's head basketball coach after 14 seasons during which he led the Cougars to 13 straight postseason berths, including eight NCAA Tournament appearances.

Rose announced his retirement Tuesday, bringing an end to a career during which he became the school's second all-time winningest coach. The 61-year-old Rose compiled a 348-135 record after taking over the program in 2005, ranking behind Stan Watts, who went 371-254 from 1949 to 1972.

"I always tell everybody, 'You can't trick how you feel,'" Rose said. "You can pretend. You can ignore it. But you know inside how you feel and my coaching soul said it was time, time to be done."

The high point for Rose and the Cougars came during the 2010-11 season, when a team led by national player of the year Jimmer Fredette went 32-5 overall and advanced to the Sweet 16 for the first time in 30 years.

"Dave has been an outstanding coach at BYU and is recognized in the profession by his peers as one of the best during his tenure," BYU athletic director Tom Holmoe said. "His teams have enjoyed a great deal of success at both the conference and national level and his legacy will long be remembered."

The Cougars have struggled of late, however. BYU has not won a conference title since joining the West Coast Conference in 2011 and has not reached the NCAA Tournament since 2015. This year, for the first time in Rose's tenure, BYU did not get invited to either the NCAA Tournament or NIT. The Cougars finished 19-13 overall, the first time Rose did not win at least 20 games in his Division I head coaching career.

Rose signed a contract extension in November that would have kept him at BYU through the 2020-21 season. The NCAA imposed sanctions on the Cougars the same month in an improper-benefits case involving guard Nick Emery. BYU was put on two years' probation and forced to vacate 47 wins over Emery's first two seasons in the program. Emery served a nine-game suspension to start this season.

Quincy Lewis, who has been an assistant at BYU since 2015, will serve as interim head coach while the school searches for a coach.

"What I'll always remember are the players, the relationship that I've had with the guys, the coaches," Rose said. "That's one of the things that I'll really miss. These coaches are my best friends."