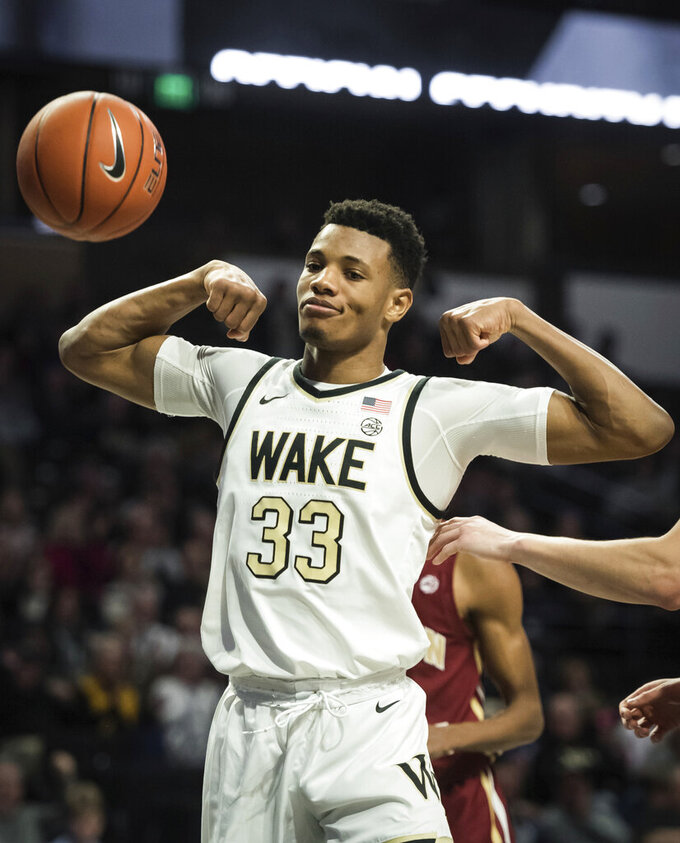 Wake Forest freshman forward Ody Oguama (33) flexes his biceps after scoring a basket over Boston College in the first half of an ACC college basketball game on Sunday, Jan. 19, 2020, at Joel Coliseum in Winston-Salem, N.C. (Allison Lee Isley/Winston-Salem Journal via AP) 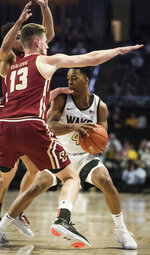 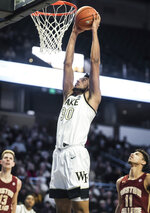 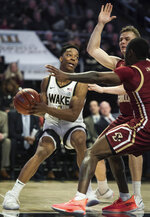 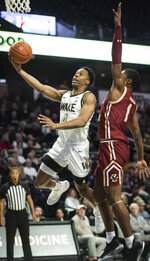 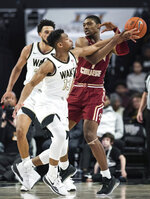 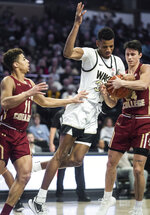 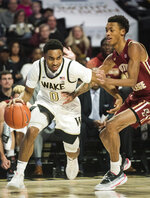 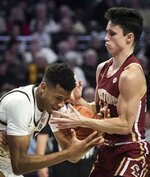 WINSTON-SALEM, N.C. (AP) — With one of his forwards out of the lineup Sunday, Wake Forest coach Danny Manning doubled down on his big men, and it paid off in the Demon Deacons’ 80-62 victory over Boston College.

The 7-foot Sarr scored 14 points and grabbed 13 rebounds. Oguama had 16 points and 10 rebounds against the undermanned Eagles, who played without leading rebounder Steffon Mitchell, who was sick. The Deacons (9-8, 2-5 ACC) held a 44-27 rebounding edge.

With the big guys dominating, Childress hit 5 of 7 from 3-point range.

“Getting those guys going makes my job easier,” said Childress.

With 6-8 forward Isaiah Mucius sidelined by a leg injury suffered before the game, Manning put Sarr and the 6-9 freshman Oguama into the starting lineup together – they normally share a spot. Though Sarr made only his third start of the season, he averages about 26 minutes per game – about 10 more than Oguama, a regular starter.

“It was great playing together,” Oguama said. “I tried to be the energy guy and work hard on both ends of the court. We just made it our job out of the gate to attack, attack, attack.”

“I thought they were terrific,” said Manning of Oguama and Sarr. “I thought our big guys were a big key. It was just a good overall team effort.”

BC was also still without 6-11 Nik Popovic, who has been out since December with a back injury. The Eagles found out the 6-8 Mitchell couldn’t play just before game time.

Boston College also struggled on the perimeter, making only 6 of 29 from 3-point range.

“They had us on the glass. They pounded us inside. And we couldn’t shoot the ball,” said BC coach Jim Christian.

The Deacons, who lost the season opener at BC, snapped a three-game losing streak. Andrien White made back-to-back 3-point shots at the start of the second half as the Deacons pulled away with a 24-4 run after BC, which never led, had tied the game at 28-28.

Boston College: The loss was evidence of the Eagles’ recent play despite their 3-3 ACC record entering the game. In their past four defeats -- sandwiched around a home triumph over Virginia -- the Eagles, who lack a consistent scoring threat, have lost by an average of more than 25 points.

Wake Forest: The Deacons’ inside game has shown improvement. Sarr and the 6-9 Oguama are a tough matchup, especially when Childress is on target from 3-point range. The Deacons have an opportunity to gain momentum with four more games against mid-level ACC teams before making a trip to No. 11 Louisville.

After BC’s Jairus Hamilton made two free throws to tie the game at 28-all late in the first half, Boston College had four consecutive possessions with a chance to take the lead, but failed to convert.

Sarr became the first Deacon to post a double-double in the first half since 2013. ... Turnovers prevented Wake Forest from putting the game away earlier. The Deacons committed 10 of their 16 turnovers – eight more than BC -- in the first half. ... The Eagles were hurt by 8-of-15 shooting at the foul line.

Boston College: The Eagles play at Pitt on Jan. 22.

Wake Forest: The Deacons play at Clemson on Jan. 21.