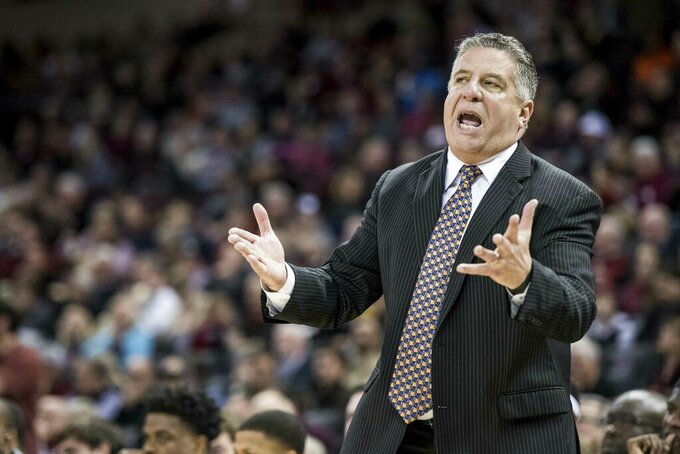 Auburn head coach Bruce Pearl shouts at an official during the first half of an NCAA college basketball game against South Carolina Tuesday, Jan. 22, 2019, in Columbia, S.C. (AP Photo/Sean Rayford) 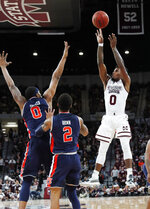 AUBURN, Ala. (AP) — The Auburn Tigers are still scoring at a high rate. The problem is, so are their opponents.

The Tigers, who spent six weeks in the top 10, have dropped from the rankings this week after their first three-game losing streak in nearly two years.

"The biggest thing that is ailing us is our defense," Auburn coach Bruce Pearl said Tuesday.

The Tigers are averaging 80 points during the current skid. But they've forced an average of just 12 turnovers a game while allowing the last three opponents to hit slightly more than half their shots collectively.

Even an offense that ranks behind only No. 1 Tennessee in points per game in the SEC can't bank on that being enough every time. In SEC games, the Tigers rank last in the league giving up 80 points on average and allowing opponents to shoot 46.6 percent.

"If we're able to fix it, we'll get back to winning," Pearl said. "If we're not, then losing will continue. It's as simple as that."

Defensive issues might be a harder fix than, say, a team that's just in a temporary shooting slump. They've been especially pronounced since league play started.

But the Tigers have enough offensive firepower to compensate much of the time, with Bryce Brown and Jared Harper leading four double-figure scorers.

Auburn has been competitive in all three losses, against No. 7 Kentucky (82-80), at South Carolina (80-77) and at No. 22 Mississippi State (92-84). The Tigers play their next three at Auburn Arena, where their only loss was to the Wildcats.

It hasn't helped that center Austin Wiley has missed the past three games with a lower right leg injury. Pearl said Wiley won't play against Missouri either, but didn't rule him out for Saturday night against Alabama.

Forward Danjel Purifoy, who was suspended for violating NCAA rules last season and the start of this one, hasn't found much of a role since his return. Purifoy has scored just 13 points in seven games, barely more than the 11.5 he averaged in the 2016-17 season.

The poor SEC start is surprising for a veteran team that returned star guards Harper and Brown and most of the other key players after claiming a share of the regular-season title last season. Auburn rose as high as No. 7 in the rankings this season.

Now, they're receiving the 26th-most votes in the AP rankings. Pearl says this is "a pivotal week for us" but also puts a positive spin on the Tigers' situation.

It's just not where Auburn was expected to be at this point.

The solution, Pearl says, is playing better defense as a team to shore up any individual deficiencies, by being in the right position away from the ball and grabbing "50-50 balls."