Ellis hits jumper to lift No. 17 USC past Washington State 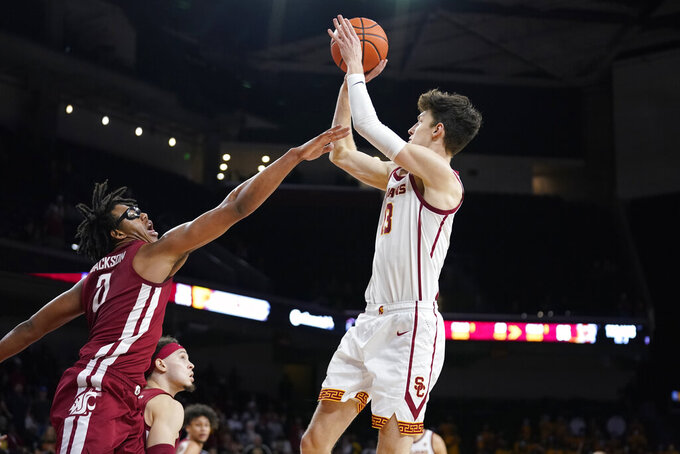 LOS ANGELES (AP) — Boogie Ellis hit a 16-foot jumper from the foul line with 0.2 seconds left to give No. 17 Southern California a 62-60 comeback victory over Washington State on Sunday.

Washington State had a 60-57 advantage before USC scored the final five points for its fourth straight victory. Max Agbonkpolo hit a 3-pointer to tie it with 2:15 remaining.

“It was surreal. It's my first big moment wearing a Trojan uniform,” said Ellis, a San Diego native who transferred from Memphis last summer. “Coach called a timeout and drew up the play. I was able to iso and pull up on the smaller guard.”

Washington State had a final chance after Ellis’ jumper, but the inbound pass was intercepted by Joshua Morgan at the buzzer. In contrast to the prowess beyond the arc, the Cougars were 5 of 32 on 2-pointers.

Washington State also pulled down 16 offensive rebounds, but were outscored 12-5 in second-chance points and 18-6 in the paint.

“This is a unique boxscore," USC coach Andy Enfield said. "Our defense was good, but some of their shotmaking was pretty darn good. They spread you out and shoot.”

The Trojans held the Cougars without a 3-pointer over the final 6:57. Enfield credited his team tightening up on its zone defense as a big reason for the comeback.

“Our defense has to carry us when we have stretches where we struggle. We challenged their shooters and started playing better basketball in the second half,” he said.

The Cougars were held scoreless over the final 2:35. Roberts hit a jumper outside the paint to extend their lead to 60-57, but they missed their final three shots and six of their last seven.

“They really packed the paint and made it hard to score around the rim,” Washington State coach Kyle Smith said. “We were able to get some pretty good looks (beyond the arc). We made a number of them but we have to be able to finish more. Our 2-point field goal percentage was unbelievable.”

Washington State scored eight straight points to take a 46-38 lead with 12:33 remaining. The Cougars were still up 57-51 with five minutes remaining before the Trojans ran off six straight to tie it.

The Trojans led most of the first half. They jumped out to a 16-6 advantage five minutes into the game as Peterson led the way with seven points. But the Cougars would slowly rally back and would take a 32-28 lead into the locker room at halftime.

Washington State ended the half on a 9-2 run, including a pair of 3-pointers by Roberts. The Cougars were 9 of 17 from beyond the arc in the first half, but just 2 of 18 on 2-pointers.

USC's Isaiah Mobley, who came into the game sixth in the Pac-12 in scoring at 14.6 points per game, had nine rebounds but only scored eight points. It is only the second time in his last 17 games that the junior forward has been held to single digits in scoring.

Washington State: Ten of the Cougars' losses this season have been by five points or under. They have dropped 12 straight against the Trojans with the last win coming in 2015 at USC.

“We had to make some shots and just had poor execution against the zone late,” Smith said. “I know we played hard, we battled and we made some shots, but it’s kind of a wasted effort.”

USC: The Trojans were 19 of 25 on free throws after struggling from the line for most of the season.