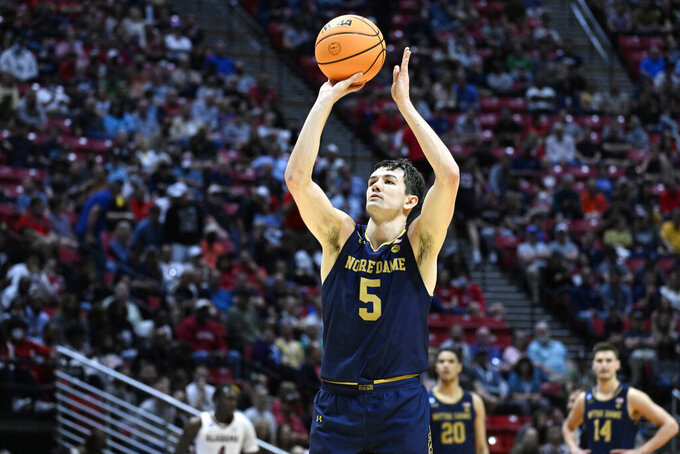 “When you’ve got a group that’s rolling like we are, playing games close together, I think it’s actually a great thing,” said Ryan, a senior guard. “You just keep the mojo going, keep the flow.”

Mojo is one thing heading into Sunday’s matchup against the Red Raiders (26-9), the No. 3 seed in the West Region. Warding off fatigue is another, considering that the 11th-seeded Fighting Irish (24-10) won their First Four game in double overtime against Rutgers late Wednesday night in Dayton, Ohio, and then took a red-eye flight to San Diego.

Again, no worries, even for a team that rotates only seven players. As long as they get the chance to launch 3-pointers over Texas Tech’s tough defense, it’s all good.

“We’d play today if we could. We’re hungry,” said Ryan, who scored a career-high 29 points, including seven 3-pointers, for the Fighting Irish in a 78-64 first-round win against No. 6 Alabama. “We want to get out on the court, lace them up and go get it.

"Texas Tech is a strong defensive team. And we’re going to be prepared to play a competitive, tough game. That’s kind of what you sign up for in March Madness. And that’s what we’re going to get."

Adams said there's “a lot of worry to find those guys in transition. They have a lot of great sets to get those guys open. Our teams understands that. We've got a huge challenge guarding them on the 3-point line because they have so many 3-point shooters.”

COACH K VS. IZZO IN GREENVILLE

The other West Region game Sunday will be epic: the final coaching showdown between retiring Hall of Famer Mike Krzyzewski of second-seeded Duke and Tom Izzo of seventh-seeded Michigan State. They are friends who have frequently coached against each other in nonconference games and the NCAAs.

This is the sixth straight season the Blue Devils will face the Spartans.

Krzyzewski is 12-3 overall against Izzo and 3-2 against Izzo in the NCAA Tournament, including Final Four wins in 1999 and 2015. Most recently, Izzo's Spartans beat a top-seeded Duke team led by eventual No. 1 overall NBA draft pick Zion Williamson in the 2019 Elite Eight.

The winner advances to next week’s Sweet 16 in San Francisco against the Notre Dame-Texas Tech winner.

The Red Raiders are noted for their tough defense but went on an offensive romp in a 97-62 rout of overmatched No. 14 seed Montana State in the first round.

“We have an identity and that's defense,” he said. “And our guys have certainly bought into it. We have great players that understand how important defense is.”

Adams was an assistant coach when senior guard Adonis Arms arrived on campus and struggled to absorb his defensive philosophies.

“I thought he was speaking a different language,” Arms said. “Coach Adams, what I heard even before I got to Texas Tech, he was the guru of defense. So whatever he was saying had to be right, because Texas Tech was good.”

Brey said he's sticking with his rotation: “We play seven. There's some kids on the blue team that practice against us that have a really bright future. But we've rode those seven guys and we're going to have to continue to do that. Those are the guys that I feel good about.”

Brey said he's taken advantage of TV timeouts being a minute longer and halftime being five minutes longer during the NCAA Tournament. “There's really time to to get your legs under you," he said, "and old guys can play a lot."

Brey has pulled into a tie with his friend and former Notre Dame coach Digger Phelps for the most NCAA Tournament wins in school history, 15.

“This is Red Raider Nation,” Arms said. “They travel. I think we're going to have our family with us, wherever we go.”