Flagler, No. 1 Baylor rally past TCU for 21st straight win 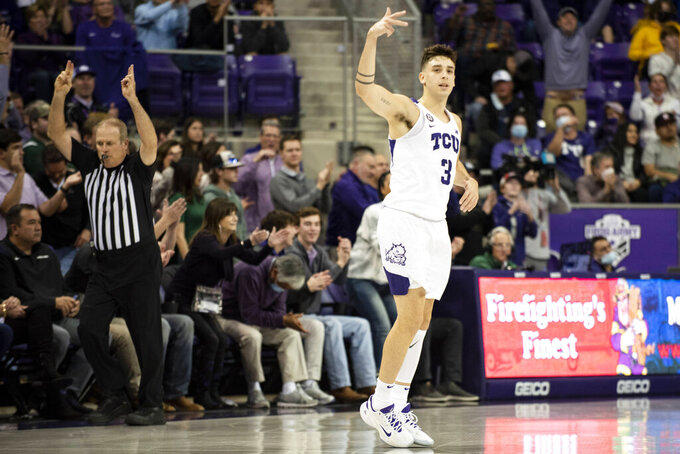 TCU guard Francisco Farabello (3) gestures after making a three-point basket in the first half of an NCAA college basketball game against Baylor in Fort Worth, Texas, Saturday, Jan. 8, 2022. (AP Photo/Emil Lippe)

FORT WORTH, Texas (AP) — With a couple of ranked Big 12 rivals losing on the road before them Saturday, the No. 1 Baylor Bears kept it from being a trifecta of upsets.

Oh, and that national-best winning streak is still alive — 21 games and counting.

Adam Flagler rallied Baylor with 18 of his 22 points in the second half, and the Bears pulled within two of their own Big 12 record for consecutive victories, beating TCU 76-64.

“We wanted to stay poised,” said Akinjo, the senior transfer from Arizona. “We’re the No. 1 team and everybody is going to see how you respond to situations like that. When we got down, we never panicked. I was just trying to keep us all poised. That’s my job at point guard.”

Flagler had a pair of 3-pointers on the run and all of his career-high six 3s after halftime, going 6 of 10 from deep. LJ Cryer scored 15 points on 4-of-7 shooting from long range.

TCU played its conference opener after its first two Big 12 games, against No. 6 Kansas and West Virginia, were postponed along with a non-conference meeting with Texas Southern that was canceled.

“We knew from day one that we could play with anybody in the country,” said Charles O'Bannon, who scored 12 points. “We’re taking this as just a loss because that’s all it is. We know that we’re fully capable of beating them again and we’re more than excited to go back to Waco next month.”

Baylor's rally came after No. 6 Kansas lost by eight to 25th-ranked — and short-handed — Texas Tech in Lubbock, and No. 14 Texas fell by 13 at Oklahoma State, which was just 7-5 going in.

“You look at the NET rating, and it’s not even close where the Big 12 is compared to the other leagues,” said Scott Drew after his 600th game as coach at Baylor (385-215 record). “And that’s because you’ve got a bunch of great teams. That means they don’t lose a lot, and they don’t lose at home hardly ever.”

Akinjo put Baylor ahead for good with a floater high off the glass for a 45-44 lead not long after Miles had put TCU up by eight with a four-point play.

Miles was fouled again on the next TCU possession and favored his right (shooting) wrist as he missed both free throws short. Miles had the wrist taped and came back quickly, but scored just four points the rest of the way.

Flagler finished Baylor's 14-0 run with a 3 for a 53-44 and kept hitting from beyond the arc to turn back several attempts by the Horned Frogs to get close once the Bears had overtaken them.

Baylor: Turnovers were a problem for the Bears in their previous victory over Oklahoma. They had a season-high 20 in that 10-point win. Baylor had nine turnovers in the first half, some of which helped fuel a 14-0 TCU run, but just three in the second half. The Bears forced 18 turnovers, had 10 steals and outscored TCU 26-15 on points off turnovers.

TCU: If the Horned Frogs showed any effects from long break with coach Jamie Dixon's overhauled roster coming off his first losing record in 18 seasons as a head coach, it was only fatigue. TCU played well despite still incorporating eight newcomers, and will move on in Big 12 play with confidence off this showing.

“It shows we’re resilient coming off that long break,” said Miles, who also missed the game before the COVID-19 pause. “Nothing is good about taking that break, that COVID break. Coming off of it and playing the No. 1 team, it was hard. But first half, we played good. But second half, I don’t think we had the same intensity and they pulled away.”

Baylor lost Jeremy Sochan to a sprained left ankle in the first half. The freshman from England had to be helped off the court and came out with his teammates for the second half with crutches and a walking boot.

Baylor: No. 25 Texas Tech at home Tuesday with the Red Raiders coming off a 75-67 victory over sixth-ranked Kansas in Lubbock.

TCU: At Kansas State on Wednesday.