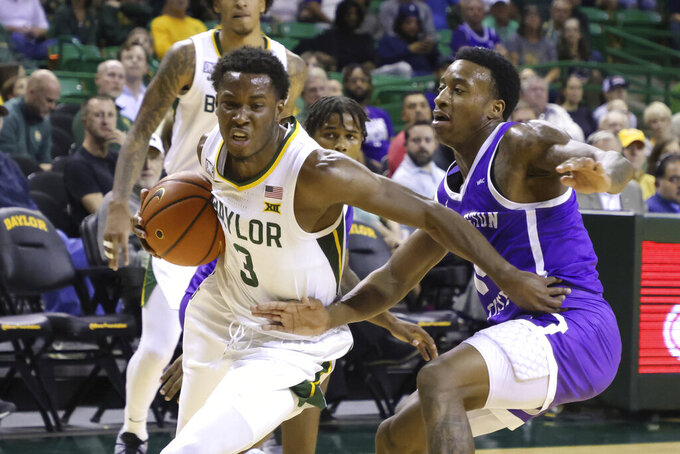 WACO, Texas (AP) — With upperclassmen — and top two scorers — LJ Cryer and Adam Flagler unavailable, it was freshman night for No. 12 Baylor.

With the junior Cryer nursing a back issue and the senior Flagler out with an illness, the Bears had trouble early pulling away from the Texans, led by former Kentucky coach Billy Gillispie, but finally took a double-digit lead not long after halftime.

“Some guys were out, so we had their back just like they have our back when we’re playing,” Love said. “So, we just wanted to come in and just play hard for them.”

Baylor (7-2) was playing for the first time since a school-record run of 54 consecutive weeks in the top-10 ended.

The Bears were coming off a 64-63 victory over No. 18 Gonzaga, when they erased a seven-point deficit in the final two minutes in a rematch of the 2021 title game won by Baylor.

The Bears dropped six spots in the poll because they started last week with a blowout loss to Marquette and former Texas coach Shaka Smart.

Shakur Daniel scored 13 points for the Texans (5-4), who were playing Baylor for the first time since 1986 and the ninth time overall.

Baylor led by three early in the second half when George and Love hit consecutive 3-pointers, then combined for Love's alley-oop dunk off George's steal for the Bears' first double-digit lead at 49-38.

George, who is from the Dallas area but played at IMG Academy in Florida, finished one point off his season high while matching his best with seven rebounds. He also had six assists.

Dale Bonner scored 12 points for Baylor, which was missing an average of 32 points per game without Cryer and Flagler. George is the other double-figure scorer for the Bears.

“One thing you want against a pressing denial type of defense is to have guards,” Baylor coach Scott Drew said. “So being down two guards, I really thought Keyonte, Dale and Langston really did a great job.”

BIG AFTER THE BREAK

After going 1 of 7 and missing all three attempts from 3 in the first half, George scored 18 after the break. He capped a 3 of 6 second half from deep with a four-point play for the final margin with 35 seconds remaining.

“Some of the best shooters miss shots,” said George, who made all seven of his free throws. “They can miss shots, I can miss shots. So, getting to the rim, got to the free throw line and then it starts opening up the game for me and I was able to make shots.”

Fifth-year senior Flo Thamba won his 100th game, the most for a player in Baylor history. The 6-foot-10 center from the Congo had six points and four rebounds in 17 minutes. Drew said Thamba was playing with strep throat.

Tarleton State: This is likely to be the only ranked opponent for the Texans, who gave Gonzaga a scare last season when the Zags were ranked No. 1.

There has been more progress this season under Gillispie, the Texas native who also coached at UTEP, Texas A&M and Texas Tech. Tarleton has its first Power-5 victory, over Boston College.

Baylor: The bigger Bears dominated in rebounding with a 41-23 edge. Five players had at least four apiece, led by Jalen Bridges with eight.

Baylor outscored Tarleton 24-10 on second-chance points with 17 offensive rebounds, its second-most this season behind 21 in a 64-point win over Mississippi Valley State in the opener.

Baylor: A nearly two-week break before playing Washington State in Dallas on Dec. 18.