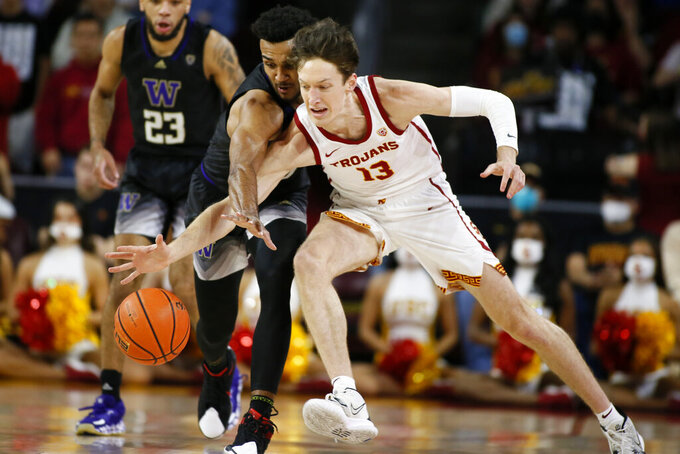 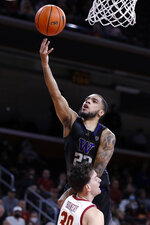 LOS ANGELES (AP) — Chevez Goodwin scored 16 of his 24 points in the first half and No. 17 Southern California defeated Washington 79-69 on Thursday night.

With the atmosphere at Galen Center not nearly as charged as it was for the rivalry win over UCLA on Saturday, USC was able to avoid the kind of letdown that has traditionally dogged the program.

“It just shows that we’re improving as a team,” said Goodwin, who also had nine rebounds. “But we still got to grow and keep going, but it was definitely a statement just showing that we weren’t like all emotion playing against UCLA. It was an actual really good win. We’re still a good team, we’re still rolling, and we just got to carry this momentum into Sunday.”

USC closed the first with a 14-2 run to take a 42-25 lead at the break. Peterson had five points, Isaiah White made four free throws, and Goodwin hit a jumper as the Trojans scored the final 11 points.

Goodwin became the focal point for USC on offense after some initial struggles against Washington’s 2-3 zone, attacking the paint to make 8 of 10 shots in the first.

“This is the first time we played a team that played zone all year, so it was kind of like a different look for us at first,” Goodwin said. “We have willing passers on our team. We just had to, for a second, just figure it out, calm down. Once we did, it was just cut and move. If you have a shot, take it.”

Terrell Brown Jr. scored 23 points and Emmitt Matthews Jr. added 20 as the the Huskies (13-11, 8-6) lost by double digits again in the second of three straight games against ranked opponents.

“We’re always the underdog, so it doesn’t matter who we play,” Matthews said. “We already know what everybody’s thinking, so our job is to go out there and change everybody’s mind.”

After trailing by as many as 23 points in the second half, Washington nearly did just that by scoring 11 straight and cutting its deficit to 64-52 with 9:53 left. The final two points came on free throws by Brown after the Trojans received a technical foul for trying to call a timeout when they didn’t have any remaining.

But Mobley, who returned after breaking his nose against Arizona on Feb. 5 and missing the past two games with concussion-like symptoms, and Goodwin made consecutive baskets to end the Huskies’ momentum.

“It’s hard playing from behind,” Matthews said. “You’re just trying to get stops, and you just try to tie a group of stops together. You can only go one possession at a time. You can’t rush.”

Washington: The Huskies are better after last season’s debacle but aren’t anywhere near the best teams in the Pac-12. The 10-point loss to the Trojans followed a 92-68 loss at the hands of the No. 3 Wildcats on Saturday. With a visit to No. 13 UCLA on deck, it won’t get any easier for Washington.

USC: If the Trojans can get continue to big showings from multiple players at the same time once they reach March, they have as high a ceiling as any team in the top-heavy Pac-12. “We’re a real team,” Mobley said. “We’re not just like, ‘Since I average the most points, I’m the reason we win.’ It’s all of us.”

Mobley played with a mask, but needed some time to get used to it after forgetting to bring it to practice Wednesday. He clearly got more comfortable as the game went on, picking up 10 points in the second half. “Everyone asked me if I could see. Yes, I could see,” Mobley joked.

Washington: At UCLA on Saturday.