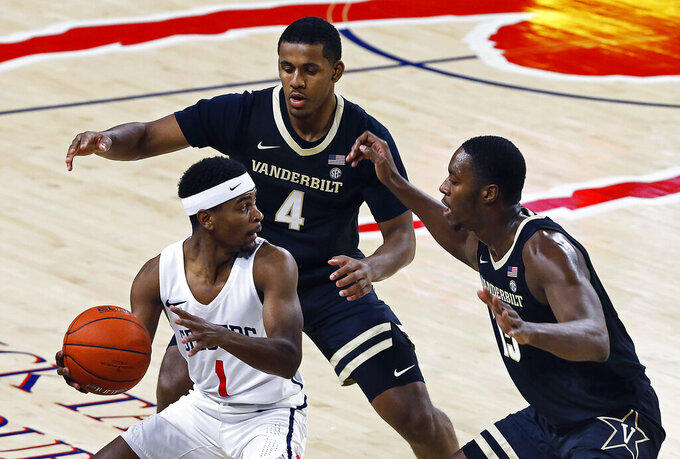 Richmond's Blake Francis (1) works the ball around Vanderbilt's Jordan Wright (4) and Clevon Brown (15) during the first half of an NCAA college basketball game Thursday, Nov. 14, 2019, in Richmond, Va. (Mark Gormus/Richmond Times-Dispatch via AP) 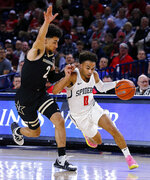 RICHMOND, Va. (AP) — Jacob Gilyard already had six steals, but wasn’t about to take all the credit for the last, and biggest, one.

Gilyard came up with a tipped ball, passed ahead to Andre Gustavson and the Spiders beat Vanderbilt 93-92 on Thursday night when Gustavson was fouled and made a free throw with 0.6 seconds left.

“I think Nathan (Cayo) might have tipped it maybe, but it went off his knee, ended up in my hands,” Gilyard said of the closing sequence. Gustavson went up for a dunk, but missed as the crowd groaned. The officials, however, huddled and eventually called Scottie Pippen Jr. for a foul, sending Gustavson to the line. He made the first — “He used a lot of rim,” coach Chris Mooney said — and missed the second.

The Spiders improved to 2-0, with both victories coming in overtime.

“It just shows how resilient we are as a team,” said Blake Francis, a transfer from Wagner who sat out last season.

Gilyard had 22 of his 26 points after halftime and added seven steals for the Spiders. Francis added 24 points and Cayo 20 and eight rebounds.

The Commodores (2-1) lost despite huge performances from Aaron Nesmith and Saben Lee. Nesmith had 34 points, 26 after halftime, and Lee had 20 of his 22 after the intermission, including back-to-back 3-pointers in the closing minutes of regulation to erase a six-point Spiders lead and force overtime.

The Spiders came back from 12 points down in the second half to beat St. Francis of Pennsylvania 100-98 in their opener, and improved to 6-3 under Mooney against Southeastern Conference teams.

Vanderbilt: Nesmith was the player NBA scouts were most interested in seeing, and he didn’t disappoint. He scored eight points in the first half and then 12 more on four consecutive 3-pointers in a span of well under two minutes early in the second half.

Richmond: A good sign for Richmond: Last season, with Nick Sherod missing most of the season with an injury, Grant Golden and Gilyard were the Spiders’ primary offensive weapons, but in a 15-2 run late in the first half, eight points came from Cayo and the other seven from Francis.

The Spiders have one of the smallest, but quickest, backcourts in the country.

Gilyard is 5-foot-9, and Francis is 6-foot, but they were a big reason why the Spiders won.

Gilyard was 8 of 14 from the field, including 4 of 7 from 3-point range, and Francis was 9 of 17 overall and 3 of 9 from behind the arc. The Spiders also forced 19 turnovers and turned them into 34 points. The Commodores, by contrast, scored just 10 points off 11 Richmond turnovers.

Nick Sherod led the Spiders with 27 points in their season opener, but never really got into the flow against the Commodores. He finished with 14 points, however, and hit a 3-pointer and two free throws in the overtime.

“He had 14 points but he was really impactful,” Stackhouse said of Sherod, “just because of the attention that you have to pay to him because of his ability to shoot.”