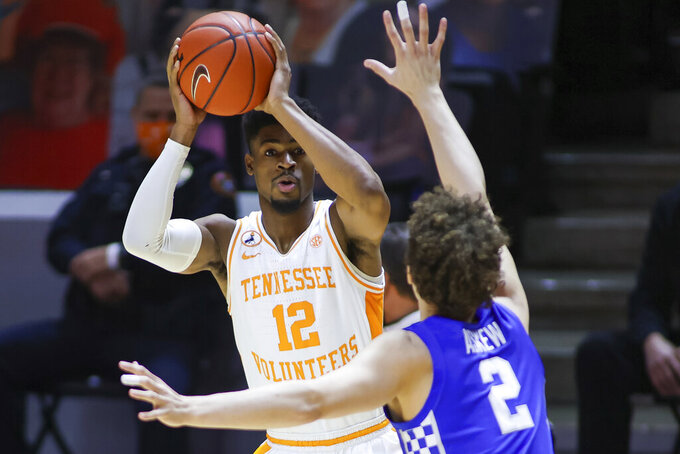 KNOXVILLE, Tenn. (AP) — It's taken a long time, but Kentucky is getting better. Just in time for the postseason, too.

A season full of frustration is finally coming into focus. The Wildcats won their third straight game Saturday, topping No. 19 Tennessee 70-55.

Isaiah Jackson scored 16 points and Davion Mintz had 15 in going 5-for-5 on 3s in the first half as Kentucky (8-13, 7-7 SEC) matched its longest winning streak of the season.

Keion Brooks had 10 points and 12 rebounds and Olivier Sarr scored 10 for a team that's always considered a lock for the NCAA tourney.

“Even when we were playing bad (this season), I still believed in them,” Kentucky coach John Calipari said. “They're kids. You keep working with them, but you hold them accountable when they're not doing it right.”

“That we were beaten by just 15 (points) is a surprise,” Tennessee coach Rick Barnes said. “We were that bad. We got stagnant (on offense). We play better when we move it and get going.”

Early in the game, Kentucky had a 15-0 run that made it 23-10. Mintz had two 3-pointers in that burst and Jacob Toppin had a pair of baskets.

Up 15 at the break, Kentucky got the lead to 60-40 midway through the second half.

“We're a good defensive team,” said Calipari. “We knew this was going to be hand-to-hand combat. (Tennessee has) a chance to be in the Final Four. We came in here and did it. They weren't at their best today. We were at our best.

“I don't even know our record. I just coach them to get better," he said.

Said Barnes: “I did not think we had great mental preparation."

“The first half we played like we practiced (Friday). (Practice) was only 30 minutes, that's the frustrating part. So much of this game is mental and the mental part is not there yet.”

“We were still able to guard well and rebound,” Calipari said. “We did some good stuff.”

Tennessee freshmen Johnson and Jaden Springer combined for 57 points in the first meeting with the Wildcats, an 82-71 Vols victory. This time they had 19.

“We tried to crowd the court on them,” Calipari said. “We did a better job. We're playing team defense. We're becoming a team.”

“Our young guys are still learning what college basketball is all about,” said Barnes.

James gives the Vols a level of versatility they don't have with anyone else on the roster. He has the ability to be effective in the backcourt and has also had success at power forward this season, allowing Tennessee an option to go with a smaller lineup.

Kentucky: After having several early-season games postponed, what the Wildcats need now is experience. Calipari said Friday he may try to add a couple games with mid-major teams before the SEC Tournament.

Tennessee: Twenty-one games into the season and the Vols are still looking for consistency, especially from senior big men John Fulkerson and Yves Pons. They've showed signs of responding recently, but need to show up on a regular basis. Freshmen Jaden Springer and Keion Johnson have stepped up to shoulder a share of the burden.

Fulkerson and Pons combined for 14 points and 9 rebounds.

“Now, more than anything, we need consistency from our older guys,” Barnes said. “It's very disappointing. We should be beyond this point.”

Kentucky: The Wildcats are home Tuesday for Texas A&M, a team that has struggled in the SEC this season. This will be the first meeting between them this year.

Tennessee: The Vols will travel to Nashville on Wednesday to take on Vanderbilt in a game that was postponed from Jan. 12. Tennessee knocked off Vandy 81-61 earlier this season.