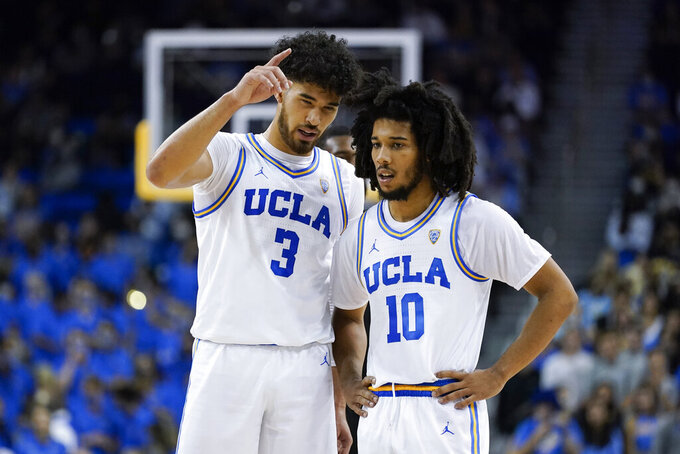 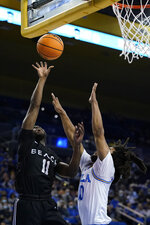 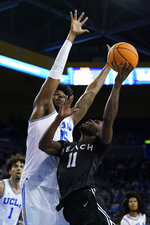 LOS ANGELES (AP) — A 21-point victory was no cause for celebration by UCLA.

Coach Mick Cronin seethed about the second-ranked Bruins' lack of defense in a 100-79 win Monday night.

“Defensively, I don't know one thing we're good at,” said Cronin, who has made his coaching reputation on defending. “I'm trying to search for someone who can guard the ball.”

Johnny Juzang scored 25 points and Jules Bernard added 22 — one off his career high — and a career-best seven assists as UCLA (3-0) pulled away in a dominant second half.

“We know the level we’re capable of playing at,” a somber Juzang said. “Just winning doesn’t always satisfy us. It’s how you perform. We made way too many mistakes.”

The Bruins couldn't shut down the duo of Joel Murray and Colin Slater. Murray scored a career-high 30 points. Slater had career highs of 27 points and five 3-pointers for the Beach (1-1).

“You've got to give other people credit, so good for those kids," Cronin said. “That's not going to ease my pain of horrendous defense.”

The first half featured six ties and five lead changes, and the Bruins blew a nine-point lead.

“As the kids would say, they were cookin’," Long Beach State coach Dan Monson said. “I just wish we could have fed them more.”

Tyger Campbell finally jumpstarted the Bruins with back-to-back 3-pointers that launched a 25-17 spurt to end the half with UCLA ahead 48-45.

Bernard had 10 points, including two 3-pointers, and scored off a rebound of his own miss. Bernard’s second 3 in the spurt came as the result of Juzang’s defensive rebound while laying on his back under Long Beach State’s basket.

Bernard was 8 of 11 from the floor, 4 of 5 from 3-point range, made both his free throws and had five rebounds in the game.

“We came out and we went to zone to try to keep them off balance, but as the game went on, they looked more comfortable in the second half, and they started rolling after that,” Monson said.

Juzang followed up his 25-point effort in an overtime win against then-No. 4 Villanova last week with his second straight game of at least 20 points despite four fouls. Jaime Jaquez Jr. added 17 points and Campbell had 15 points.

“I know everybody’s happy we beat Villanova, but the game was at home. We’ve got room for a lot of improvement,” Cronin said. “Right now I need some leadership, accountability in the locker room.”

The Bruins came out strong to open the second half, outscoring the Beach 28-13 to take their largest lead of the game, 76-58. Bernard had 10 points and Juzang six in the spurt.

That effectively finished off Long Beach State, which never got within single digits the rest of the way.

Long Beach State has never won at Pauley Pavilion, though it came close in 2019-20, losing by four points after leading by six with five minutes remaining. The Bruins are 18-1 in the all-time series.

Long Beach State: The Beach returns nine lettermen joined by three transfers, three freshmen and a returning redshirt. Jordan Roberts, Slater and Drew Cobb all took advantage of the NCAA rule in the wake of the COVID-19 pandemic that allowed them to return for a fifth year. The Beach is looking to rebound after being hit hard by COVID-19 and injuries last season that saw five or more players miss at least seven games.

UCLA: The Bruins have a chance to go into their game with No. 1 Gonzaga next Tuesday undefeated. They're 7-4 against teams ranked in the top five of the AP poll since the start of the 2015-16 season. That mark includes a pair of wins against top-ranked Kentucky in 2015 and 2016.

UCLA: Hosts North Florida on Wednesday in the last of four straight home games to open the season.