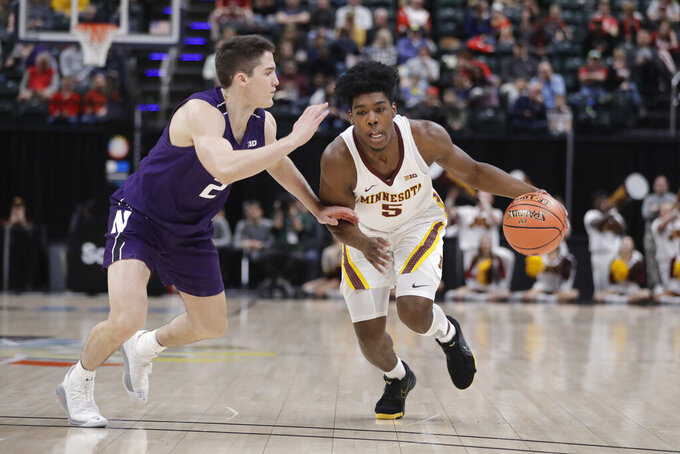 Minnesota's Marcus Carr (5) goes to the basket against Northwestern's Ryan Greer (2) during the first half of an NCAA college basketball game at the Big Ten Conference tournament, Wednesday, March 11, 2020, in Indianapolis. (AP Photo/Darron Cummings)

MINNEAPOLIS (AP) — Minnesota's Marcus Carr will declare his early entry for the NBA draft, the sophomore point guard said on Monday night in a post on his Instagram account.

Carr said he intends to keep his name in the draft, but he said he will not sign with an agent in order to maintain his college eligibility. Carr's teammate, sophomore center, Daniel Oturu, announced last week he was entering the draft.

“I am looking forward to receiving valuable information, going through whatever process this unique draft year does include, and ultimately making the best decision for myself and my family,” Carr said.

Carr has played just one season for the Gophers, after having to sit out in 2018-19 following his transfer from Pittsburgh. Oturu and Carr combined to account for half of the team's scoring in 2019-20. Carr averaged 15.4 points, 6.7 assists, 5.3 rebounds and 36.8 minutes for the Gophers.