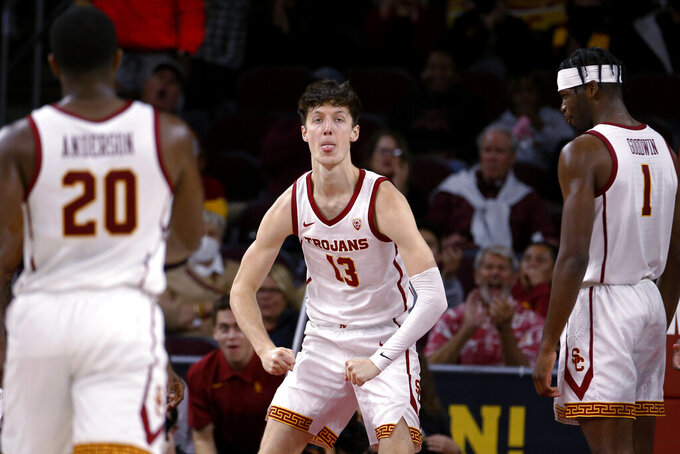 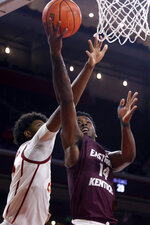 LOS ANGELES (AP) — Southern California's big men were too much for Eastern Kentucky.

“He was playing great and he was hitting everything,” Peterson said of Mobley.

USC's frontline shot 19 of 27 for a combined 49 points from Mobley, Chevez Goodwin and Max Agbonkpolo.

“We have a lot of weapons,” Mobley said. “We're getting chemistry. We're kind of feeling each other out and getting better each game.”

The Colonels (5-5) dropped their fourth in a row. They were led by Braxton Beverly with 16 points.

USC raced to a 17-6 lead to start the game, including 12 straight points, with Mobley scoring seven points. The Colonels missed 14 of their first 16 shots.

Mobley made his first five shots of the game and his 3-pointer pushed USC's lead to 15 points. The Trojans dunked on three straight possessions near the end of the half, including two by Joshua Morgan.

USC shot 53% in the half and its defense held the Colonels to 26% from the floor.

The Trojans had another offensive burst to open the second half. They outscored the Colonels 17-9 to push their lead to 58-34. Morgan dunked twice more and USC hit four 3-pointers in the spurt, including two by Mobley.

Mobley is helping fill the void left by his younger brother Evan, who starred for one season before leaving for the NBA, where he has been one of the league's top rookies.

“We don't have a centerpiece like Evan last year,” Peterson said. “Anyone can step up on any given night. Anyone can make plays.”

The Colonels managed to put together a 15-5 run, led by six points from Lewis, to close to 63-49. USC responded by running off nine in a row. Peterson threw down a monster jam, getting fouled and making the free throw.

“I was glad (he used) two hands for safety,” Mobley joked.

Peterson said, “I'm not around there too much, so it was a lot of fun.”

Mobley and the rest of USC's starters sat down. That's when the Colonels found their touch. They scored 11 points in a row, hitting three straight 3-pointers to get to 74-62. They outscored USC 43-39 in the second half.

That forced the Trojans to bring back the starting five for the final two minutes.

“I definitely wasn't expecting to come back in there at the end,” Peterson said.

“That team is dangerous because they hit a lot of 3s and play kind of chaotic,” Peterson said.

Eastern Kentucky: The Colonels are coming off a 22-win season — tied for third-most in program history — and were picked to finish second in the ASUN. They've endured some tough road losses recently, including by three points at West Virginia and five points at Western Kentucky, that will surely toughen them up for conference play.

USC: The Trojans have played just four home games so far, dominating each one. They've been good on the road, and have neutral-court games against Georgia Tech and Oklahoma State later this month.

The Trojans committed a season-high 18 turnovers. The Colonels scored 21 points off USC's miscues. All but one of USC's 10 players had at least one turnover. “We had some poor decision making,” coach Andy Enfield said.

Boogie Ellis, USC's leading scorer at 14 points a game, went scoreless. He was 0 for 10 and missed all of his seven 3-point attempts. He had five rebounds and five assists. “It doesn't happen too often,” Enfield said.