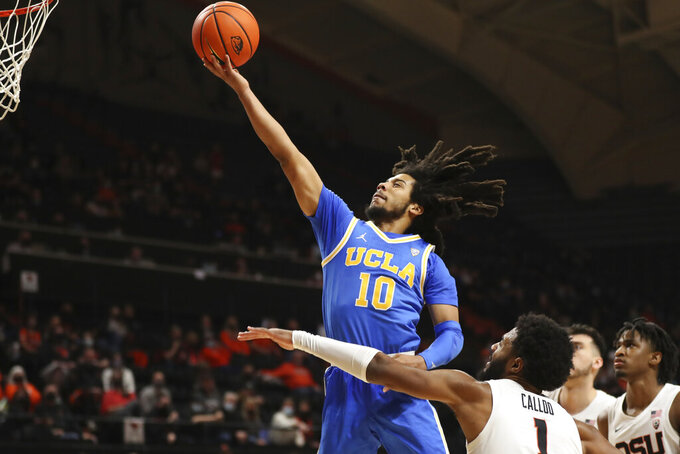 Despite the absence of leading scorer Johnny Juzang, who missed the game with an ankle injury, the Bruins (21-6, 13-5 Pac-12) had plenty of firepower on offense and intensity on the defensive end.

Campbell was 8 of 10 from the field, made four 3-pointers, and had five assists.

Jaime Jaquez Jr. scored 14 of his 17 points in the first half, Jules Bernard had 16 points, and Cody Riley added 13.

After reaching the Final Four last year, UCLA has dealt with heightened expectations this season.

“It’s a long season. We’ve just got to remind ourselves why we play basketball,” Jaquez said. “Honestly, for the love of the game and the want to compete, and to win with a group of guys that you’re so bought in with. It’s easy to forget that through a long season.”

Oregon State (3-24, 1-16 Pac-12) has lost 14 games in a row since beating Utah on Dec. 30. Oregon State coach Wayne Tinkle was especially disappointed in Saturday’s performance because it came on Senior Day at Gill Coliseum.

“Shame on us. Very, very disheartening,” Tinkle said. “And give (UCLA) a ton of credit. They played with a lot of fire and togetherness and selflessness, and we didn’t.”

Maurice Calloo led the Beavers with 13 points in their most lopsided defeat of the season. Glenn Taylor Jr. and Roman Silva scored 10 points apiece.

After making just 4 of 24 3-pointers in Thursday’s loss at Oregon, the Bruins were much improved from behind the arc, converting 13 of 20 (65%). Cronin said being able to establish an inside presence was a factor in UCLA’s excellent long-range shooting.

“We’ve got to shoot the ball well for us to be an elite team,” Cronin said. “It’s just the way it works. It’s the way we’re configured as a team. We’re not one of the biggest, strongest, most powerful teams in the country.”

Campbell’s 3-pointer culminated a 10-0 run and extended the Bruins lead to 41-24 late in the first half.

Oregon State closed to within 11 points early in the second half, but the Bruins dominated the rest of the way.

Bernard’s four-point play was part of a 22-0 run that extended the lead to 75-39 midway through the second half.

UCLA made 58.6% of its field goal attempts and dominated the boards with a 36-18 advantage.

UCLA: Juzang suffered a sprained ankle in the first half of Thursday’s loss at Oregon and did not return. Cronin said he is doubtful for Monday’s game at Washington. Juzang is third in the Pac-12 in scoring at 17 points per game. UCLA is currently projected as a No. 4 seed in the NCAA Tournament. A key game down the stretch will be the regular season finale at home March 5 against USC.

Oregon State: Mired in a losing streak that has reached 14 games, the Beavers are having their worst season since going 5-27 overall and 1-17 in the Pac-12 in the 2016-17 campaign, a season after reaching the NCAA tournament for the first time in 26 years. The Beavers have struggled with injuries and chemistry this season after winning the 2021 Pac-12 tournament and advancing to the Elite Eight in the NCAA tournament.

UCLA: The Bruins will be at Washington on Monday.

Oregon State: The Beavers will host Washington State on Monday.