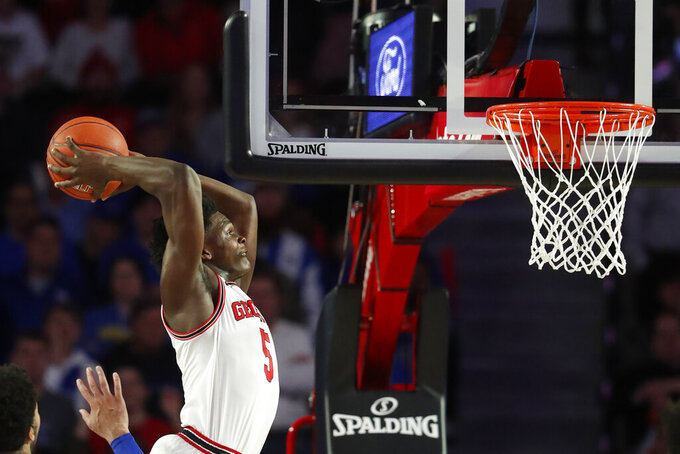 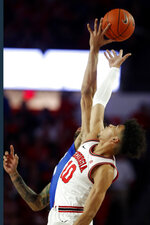 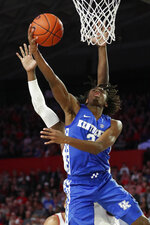 Somehow, it all came together for another win over Georgia.

Immanuel Quickley's 3-pointer gave No. 14 Kentucky its first lead of the second half and the Wildcats overcame Anthony Edwards' 23 points to beat Georgia 78-69 on Tuesday night and continue their domination of the Southeastern Conference rivalry.

Tyrese Maxey and Nick Richards each had 17 points and seven rebounds for Kentucky. Quickley added 15 points.

Kentucky, which leads the SEC and ranks fourth in the nation with 80.1% free-throw shooting, had an off night, making 10 of 20 attempts.

“We won without making free throws today,” said coach John Calipari, sounding almost surprised. “It's good to know we can do that.”

The Bulldogs hoped to gain momentum from last Saturday's win at then-No. 9 Memphis. It was Georgia's first road win over a top-10 team since 2004. The Bulldogs were in position to beat another ranked opponent before the Wildcats took control.

Finally, in the final minute, Kentucky fans in the sellout crowd of 10,523 chanted “Go Big Blue!”

Kentucky point guard Ashton Hagans returned from a left ankle injury to start and score 13 points. The injury forced Hagans, from Cartersville, Georgia, to sit out Saturday's 71-59 win over Missouri in the Wildcats' SEC opener. He started against the Bulldogs after moving with no difficulty in pregame warmups.

“He is a tough hombre,” Calipari said of Hagans. “The guy is physically tough and strong and he uses it.”

Hagans had a slow start, missing a 3-pointer and a layup in the opening minute. The sophomore was 0 for 5 from the field before breaking his drought with a layup to start a three-point play midway through the half. He made 4 of 12 shots.

Edwards had the fans on their feet when he made his first two shots, including a 3, for a 5-0 lead. Kentucky answered with 10 straight points.

The Bulldogs closed the half with an 11-5 run. Edwards capped Georgia's scoring in the half with a powerful baseline jam before Hagans answered with a 3.

Quickley's 3-pointer from the corner gave the Wildcats their first advantage of the second half, 58-57. Following a timeout, Maxey blew past the Georgia defense to score on a windmill layup, and Nick Richards' three-point play capped a 10-0 run that pushed Kentucky's lead to 63-57.

Edwards said Georgia's defense suffered a second-half letdown. The Wildcats made 17 of 29 shots (58.6%) after halftime.

INTEREST FROM THE PROS

There was good representation from the Atlanta Hawks in the stands. General manager Travis Schlenk had a seat but was one-upped by point guard Trae Young, who sat on the front row beside rapper Quavo. Young's presence caught the attention of Edwards, who gestured toward the Hawks star after his big jam late in the first half.

Calipari called Georgia “one of the top two or three jobs in our league” and predicted coach Tom Crean would build a winner. Calipari said he took a walk around Athens and the campus on Tuesday and was impressed. “This is an unbelievable school,” he said, adding, “The campus is nuts. The downtown area is nuts.”

Kentucky: The Wildcats finally began using their size advantage inside with E.J. Montgomery (6-foot-10, 228 pounds) and Richards (6-11, 247) in the second half. Georgia had a 24-17 advantage in rebounds in the first half, but Kentucky finished with a 40-36 edge. Richards scored 13 points and had five rebounds in the second half. ... Maxey had eight assists and blocked four shots. Hagans had five assists and four steals.

Georgia: The Bulldogs continue to improve in Crean's second season, but they couldn't pull off their first win over Kentucky since March 7, 2013. Rayshaun Hammonds had only nine points and four rebounds before fouling out with 1:09 remaining. There was too little help from Georgia's other inside players. The Bulldogs finished with a poor combination of 11 assists and 14 turnovers, including four by freshman point guard Sahvir Wheeler.

Kentucky: The Wildcats return home to play Alabama on Saturday.

Georgia: The Bulldogs play at No. 5 Auburn, which joins Kentucky as the SEC's only ranked teams, on Saturday night.