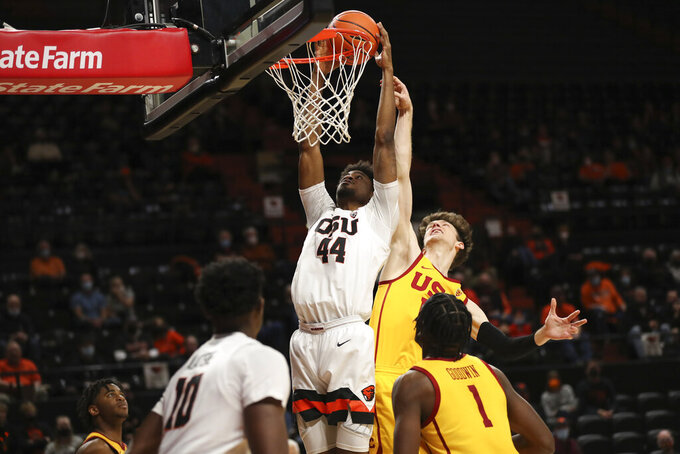 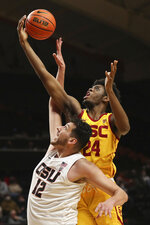 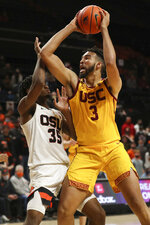 “They’ve had a few tough breaks this year, but they’re a very good basketball team, especially when they play like they did tonight,” USC coach Andy Enfield said of Oregon State. “They showed a lot of heart. We were fortunate to grind out a double overtime victory on the road.”

Dashawn Davis scored 27 of his career-high 31 points in the second half and overtime for Oregon State (3-23, 1-15), which lost its 13th straight game. Jarod Lucas added 18 points.

"I was just playing my game, having fun," said Davis, who missed a 3-pointer from the right corner with three seconds left in the second overtime.

He scored the Beavers’ final 19 points in regulation, converted a jumper in the lane, tying the game at 83-all with 19 seconds left in the first overtime. Dexter Akanno blocked Peterson’s potential game-winning jumper, extending the game to a second OT.

Davis hit a 3-pointer with 3.3 seconds left in regulation to tie the game at 75-all.

“I was really proud of the fact that we didn’t back down,” Oregon State coach Wayne Tinkle said. “They never doubted that we were going to pull that one out.”

“We were short-handed a little bit (with Boogie Ellis and Isaiah White out), but our other guys stepped up and played very well,” Enfield said, adding that he's proud of his team for 24 regular-season wins.

Davis scored on an array of jumpers and drives in his best game of the season that also included seven assists.

USC went on an 11-0 run late in the first half to extend the lead to 38-27, but Oregon State finished the half strong. Lucas made a 3-pointer, and Davis had a steal and a dunk, cutting the deficit to 40-33 at the break.

USC: The Pac-12 regular-season title may be out of reach for the Trojans, but a five-game winning streak and strong play down the stretch bodes well for postseason momentum. The Trojans are alone in second place in the Pac-12 following Oregon’s 68-63 win Thursday over No. 12 UCLA.

Ellis, who scored 21 points and hit the game-winning shot in the Trojans’ 62-60 win over Washington State last Sunday, did not play due to an ankle injury. White, another rotation player for USC, was out with a wrist injury.

Oregon State: The Beavers have struggled with injuries and chemistry this season after winning the 2021 Pac-12 tournament and advancing to the Elite Eight in the NCAA Tournament. Oregon State has been competitive in recent games, trailing at then-No. 3 Arizona by just two points last week before losing 83-69. The Beavers have yet to win a game in 2022.

USC: At Oregon on Saturday.