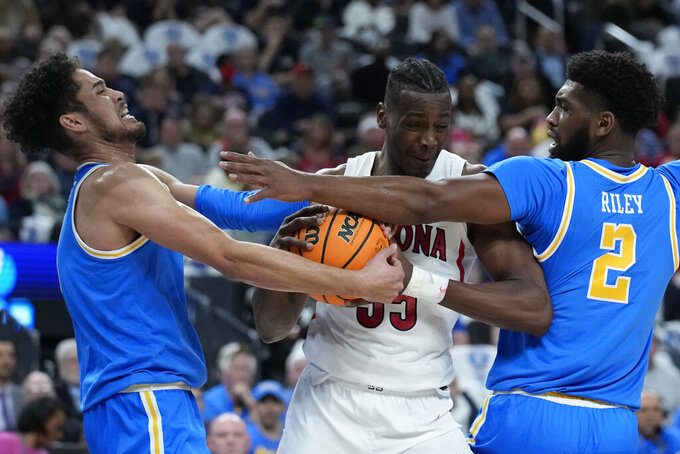 LAS VEGAS (AP) — Arizona clanged shots, threw weak passes, watched UCLA build what seemed to be an insurmountable lead. Then the Wildcats found a gear few teams have — maybe no other team has.

Now they're Pac-12 champions, a likely No. 1 seed on Selection Sunday and among the favorites to win the national championship.

Not bad for a team in its first season under a new coach.

“These games are long and we're a team that makes runs,” Lloyd said. “I'm always like, ‘Hang in there, hang in there, we could be a possession or two away from a run.’ We did a good job of hanging in there.”

The Wildcats and Bruins put on a Vegas headlining show worthy of the conference's top two seeds, trading athletic plays and big runs at the first full-capacity Pac-12 Tournament in three years.

The top-seeded Wildcats (31-4) played their second straight game without point guard Kerr Kriisa due to a sprained right ankle suffered in the quarterfinals against Stanford. His replacement, Justin Kier, was limited to 13 minutes due to foul trouble, depleting Arizona’s depth even more.

Arizona labored without Kriisa and Kier, falling into an 12-point hole early in the second half before revving up one of the nation's best offenses. The Wildcats went on a 22-5 run to lead 63-58 and fire up the McKale Center north (T-Mobile Arena) crowd.

Arizona kept its offensive Strip show rolling to sweep the Pac-12 regular-season and tournament titles for the seventh time. It was the Wildcats' eighth Pac-12 Tournament title, first since 2018

“When we're down 10 or up 20, we have the same mentality of playing hard until there's no more time on the clock,” Mathurin said after enjoying one of the celebratory cupcakes from a table outside Arizona's locker room.

The second-seeded Bruins (25-7) shut down Arizona for long stretches and appeared to be headed toward a repeat of their lopsided win in Westwood in January.

UCLA went into a lengthy offensive funk after going up 53-41, triggering the Wildcats' play-fast offense and their raucous fans. The Bruins tried to punch back, but the Wildcats countered each time.

UCLA pulled within 80-76 in the final minute, but Christian Koloko and Oumar Ballo had three blocked shots in the final 38 seconds. Ballo blocked six shots overall, Koloko four and Arizona tied the tournament record with 11.

“I thought Arizona was the tougher team down the stretch. That’s where the game was decided,” UCLA coach Mick Cronin said. “They were more physical. Our defense left a lot to be desired, to say the very least.”

Sin City turned into Hoops City after two years of pandemic restrictions, with five conference tournaments played over nine days. The Pac-12 finale topped the marquee a few steps from The Strip, the conference's top two teams during the regular season.

The Bruins and Wildcats put on a high-level show in the first half — when fouls weren't being called.

The Wildcats were whistled 12 times and Kier was limited to eight minutes after picking up three fouls. The Bruins were called for nine fouls, including two each on three players.

“I don't know if it was being called tight — that's how those games go,” Lloyd said. “We just had to hang in there.”

Kier picked up his fourth foul 62 seconds into the second half and Koloko was called for a Flagrant 1 foul on an elbow to Bernard's head.

Bernard made both free throws and Tyger Campbell hit a jumper to cap a 10-2 run that put UCLA up 50-39.

UCLA big man Cody Riley then went to the bench with his fourth foul. Arizona took advantage with its big run and kept it rolling, hitting 16 of 24 shots in the second half.

“It may have been a snowball effect,” Bernard said “We started out the half with two back doors, one on me and one on someone else. But, regardless, I feel like just their energy on both ends was better than ours.”

Arizona has that effect.

UCLA's defense was superb early, but flailed once Arizona got rolling. The Bruins are still plenty good enough to make some noise again in the NCAA Tournament.

Arizona, after a slow start, showed off the gear few teams can match. That's why they're among the favorites to win the national title.

UCLA: Will likely still be a high seed in the NCAA Tournament

Arizona: Should be a No. 1 seed on Selection Sunday.