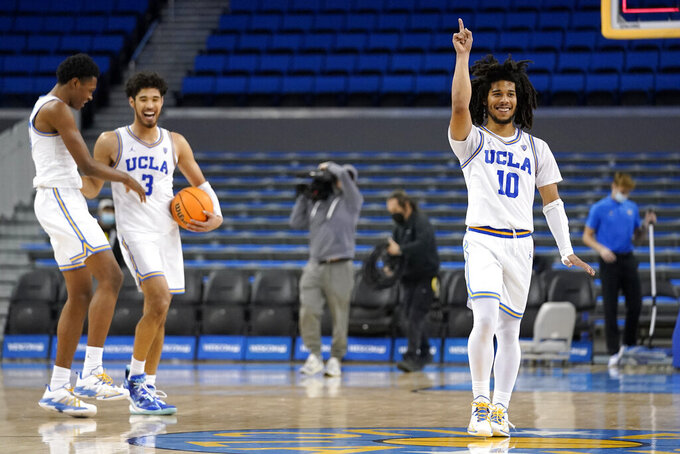 LOS ANGELES (AP) — Coming off an overtime loss, UCLA paid the price in practice. The third-ranked Bruins went hard and it paid off.

Johnny Juzang scored 19 of his 24 points in the second half when UCLA pulled away to beat Oregon State 81-65 on Saturday night.

“We worked on little things and intensity,” Juzang said about the off-day practice. “Sharp preparation and working on being disruptive. That was a good adjustment for us.”

Jaylen Clark added 11 points on 5-of-6 shooting in his first career start for the Bruins (11-2, 3-1 Pac-12). The sophomore replaced Jaime Jaquez Jr., who sat out with a left ankle injury.

“On this team, you always got to be ready,” Clark said. “I really just wanted to make the most out of it.”

Dashawn Davis and Jarod Lucas scored 12 points each for the Beavers (3-13, 1-5), who remain winless in five road games this season.

“We got careless in the second half,” OSU coach Wayne Tinkle said. “We really had problems — either we gave them high-percentage shots or we fouled them.”

Juzang scored 10 of UCLA's first 17 points to open the second half, extending its lead to 60-44. He hit a 3-pointer and converted a three-point play, while Clark and Cody Riley picked up their third fouls.

“This is as active as they’ve been on defense in a long time,” Tinkle said. “They really got to the rim and hit some mid-range shots. Coach really got them pumped up after the loss.”

The Beavers also had foul trouble. Starters Warith Alatishe and 7-foot-1 Roman Silva got whistled for their third fouls within seconds of each other early in the second half. Silva and Isaiah Johnson both fouled out.

The Bruins employed a five-guard lineup at times and outrebounded Oregon State 23-22, with Juzang grabbing six — all on the defensive glass.

“It was tough to get a rebound,” coach Mick Cronin said. “Guys looked like flies next to Roman Silva out there.”

Alatishe, OSU's second-leading scorer at 12.3 points, took one shot and was held scoreless in a physical game that saw players repeatedly crash to the court.

The Beavers' Dexter Akanno somehow managed to avoid injury when he hurdled over the scoring table chasing the ball and landed in the empty first row. UCLA's David Singleton appeared to hit his head falling backward into his bench, but he wasn't injured.

Akanno got the Beavers' bench riled up to start the game with a fastbreak one-handed dunk. They kept it close early when both teams shot 70%.

But the Bruins dominated the rest of the half, outscoring Oregon State 20-11 to lead 43-35 at the break. Five different Bruins scored, led by Jules Bernard with seven and Tyger Campbell with six.

For the third straight game, only relatives of players and coaches — totaling 141 — were allowed in Pauley Pavilion because of surging COVID-19 cases. Fake crowd noise was pumped in.

Oregon State: Coming off an Elite Eight appearance last season, the Beavers are struggling to find themselves. They returned three starters from last season and incorporated seven new scholarship players. They opened the season with a win and then dropped 10 in a row. After two straight wins, the program was disrupted by COVID-19 issues to start 2022. “We just need that one spark,” Tinkle said. “We will continue to fight and grind.”

UCLA: The Bruins improved to 100-40 against Oregon State in the teams' 140th meeting. They needed the win to avoid losing two in a row for the first time this season, having drawn Cronin's ire for their unfocused play in the 84-81 overtime loss to Oregon two days earlier. The Bruins are 7-1 at home.

Jaquez woke up with a puffy ankle and although the swelling had gone down by gametime, he was held out as a precaution. ... Juzang's points were one off of his season high. ... UCLA dominated in the paint, 40-22. ... OSU committed 16 turnovers after having 14 in a loss at Southern California on Thursday.