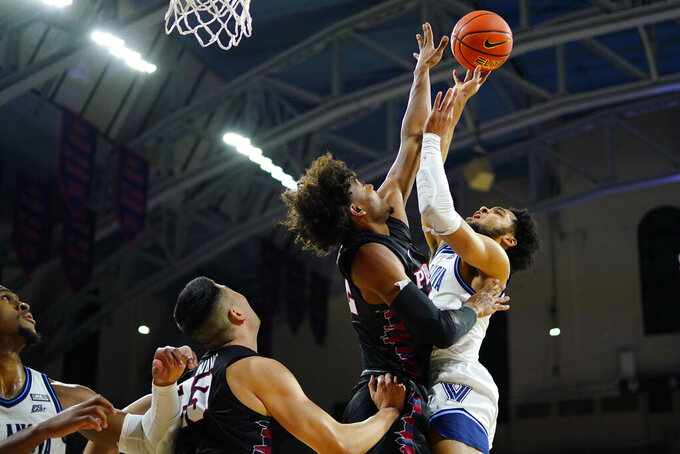 Villanova's Caleb Daniels, right, goes up for a shot against Pennsylvania's Lucas Monroe during the first half of an NCAA college basketball game, Wednesday, Dec. 1, 2021, in Philadelphia. (AP Photo/Matt Slocum)

PHILADELPHIA (AP) — Collin Gillespie has played so long at Villanova that the guard has become a de facto coach on the court. He tells his teammates where they should be, sets up the next play and echoes all the pregame instruction from coach Jay Wright.

Against Penn, the fifth-year guard — make that, Coach Gillespie — flashed a reminder that he's still a pretty good scorer.

Gillespie scored 26 points, Brandon Slater had 16 and No. 6 Villanova avoided a second straight court-storming at Penn with a 71-56 win Wednesday night.

The last time the two Big 5 schools played at the Palestra in 2018, the Ivy League Quakers pulled off one of the great upsets in school history with a three-point win over the reigning national champion Wildcats.

The only thing more improbable for Penn than beating Villanova once was doing it twice inside the hoops haven affectionately known as the Cathedral of college basketball.

“It takes every ounce of us to compete against that kind of physicality and toughness,” Penn coach Steve Donahue said. “Sometimes, the skill and execution was behind.”

The Wildcats (5-2) used an early 13-0 run that gave them a needed cushion by halftime. With former 76ers coach Brett Brown watching from the bleachers, Gillespie gave him a look at a point guard that could hit 3-pointers.

Gillespie's 15.5 points per game are a career high and his 43% 3-point shooting is also better than any of his previous four seasons.

"There were games where I wasn't as aggressive,” he said. “I just try and stay aggressive at all times. Just try and become more of a complete player.”

Gillespie, making his 94th start over five seasons, hit four 3s in the first half and pushed back the smallest of Penn runs. He hit one for a seven-point lead, another for an 11-point lead and one more for a 16-point edge. That was good enough to hit cruise control against the Quakers (3-7). He finished 9-for-15 from the floor, and played 35 minutes without an assist.

Gillespie returned for a fifth season after he missed the end of last year with a torn MCL in his left knee.

The Wildcats played their second straight game at the Palestra against a Big 5 school following Sunday’s 26-point win against La Salle. The Wildcats needed the breather after opening the season with losses to No. 5 UCLA and No. 2 Purdue and a win against No. 13 Tennessee.

Villanova, Penn, Saint Joseph’s, La Salle and Temple have long had rivalry games intertwined in the fabric of Philly sports. The Big 5 — a name coined by Philadelphia Inquirer sports writer Herb Good — was officially formed in 1954 and the schools started round-robin play for “City Series” bragging rights in 1955.

Whatever the series once meant to the city has all but evaporated as Villanova grew under Wright into a national power. Streamers and rollouts — banners that poked fun at the opposing team — have gone the way of the set shot. The Palestra wasn’t even full for this one, and probably for good reason after Penn shot 7 for 25 in the first half.

The building came alive briefly early in the second half when Clark Slajchert buried a 3-pointer, hit another basket and Penn forced a shot-clock violation that made it 43-34. Max Martz hit a 3 with 5:16 left that kept it a nine-point game.

The Wildcats had won a city-record 25 straight games before it lost to Penn in 2018 and hasn’t lost a Big 5 game again over that span, sucking the life out of the city series.

Villanova: The schedule tightens as the Wildcats head to Madison Square Garden on Tuesday to play Syracuse in the Jimmy V Classic. Then a Dec. 12 game against No. 4 Baylor, a game the national champion Bears won in last season’s Sweet 16. Villanova also opens Big East play this month against Creighton and Xavier.

Penn: The Quakers fell to 0-3 this season against Top 25 teams and play the next three games against Temple, Saint Joseph’s and La Salle.

“I think we’re going to be a really good basketball team come January,” Donahue said. “I think this will benefit us.”

Villanova: Play Saturday at the Pavilion against Saint Joseph’s. Long live the Big 5? The Hawks haven’t won in the series since 2011.