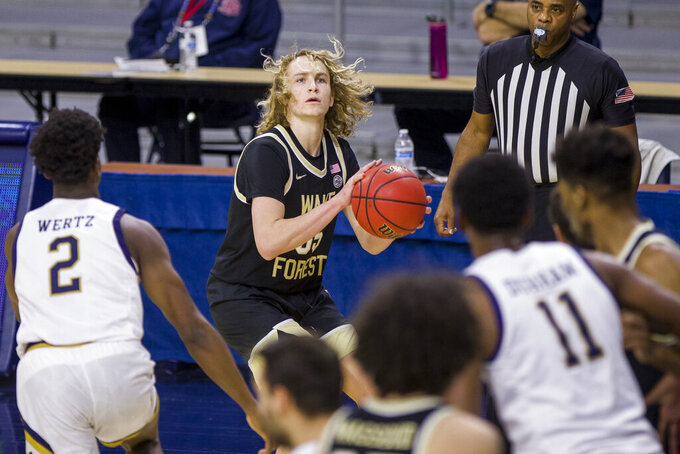 Wake Forest's Carter Whitt (35) sets up for a 3-pointer in front of Notre Dame's Trey Wertz (2) during the first half of an NCAA college basketball game Tuesday, Feb. 2, 2021, in South Bend, Ind. (AP Photo/Robert Franklin)

After leading 35-32 at the break, Notre Dame started the second half on a 16-0 run for a 51-32 advantage. Prentiss Hubb opened and closed the spurt with 3-pointers, and Wake Forest didn't make its first basket until the 14:47 mark. With four minutes remaining, Durham converted a three-point play to make it 75-47.

Dane Goodwin and Hubb each scored 10 points for Notre Dame (7-9, 4-6 ACC), which has won four of its last five games. Nate Laszewski grabbed 10 rebounds, and Hubb also had five rebounds and 10 assists.

Notre Dame plays at Georgia Tech on Saturday while Wake Forest is off until Feb. 10 when it faces Boston College.