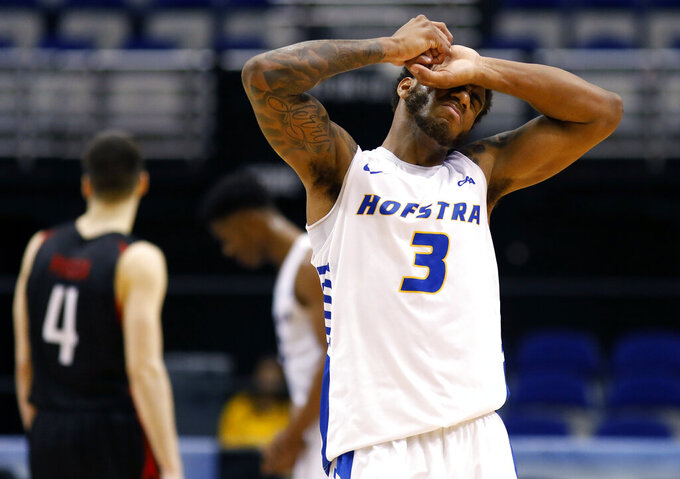 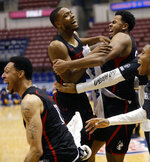 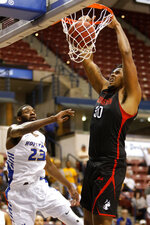 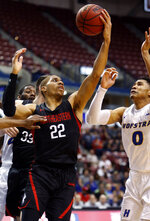 NORTH CHARLESTON, S.C. (AP) — When Northeastern saw its large lead fading in the Colonial Athletic Association Tournament finals again, the Huskies flashed back to their failure from a year ago and all the hard work they had put in since.

Northeastern is sitting once more as CAA Tournament champions after Vasa Pusica had 21 points off seven 3-pointers and helped his team regroup after blowing a double-digit lead to defeat top-seeded Hofstra 82-74 on Tuesday night.

The situation was so eerily similar to the 2018 finals. Northeastern led College of Charleston by 17 in the second half, then watched the Cougars cut down the nets after an 83-76 loss.

"Without that loss maybe we wouldn't be in this position right now," said Pusica, named the tournament's Most Outstanding Player.

The second-seeded Huskies (23-10) won the league's automatic NCAA Tournament berth for the second time in five seasons and ninth time in school history.

"Are we off the one line?" Northeastern coach Bill Coen joked when asked about possible seeding.

It didn't appear Northeastern was heading anywhere but back home with another disappointment when Hofstra opened the second half with a 28-12 run to tie things at 54-all on Jacquil Taylor's two foul shots with more than nine minutes left.

That's when the senior Pusica took charge. His fourth 3-pointer put the Huskies back in front. Pusica added another long-range basket three minutes later for a 66-58 lead. By the time he made his sixth 3, Northeastern led 71-60. Pusica screamed in celebration, one he and his teammates held in for almost a year.

"I'm not sure I have the words to describe tonight," Coen said.

The Pride (26-8) could not recover despite 29 points from the nation's second-leading scorer, Justin Wright-Foreman.

"We have to own it," Pride coach Joe Mihalich said. "Let's cut to the chase, they played two halves, we played one."

Hofstra, as the CAA regular-season champions, has a guaranteed spot in the NIT. The Pride were seeking their first NCAA berth since 2001 when Villanova coach Jay Wright was leading Hofstra's program.

Bolden Brace had 10 points, 10 rebounds and came an assist away from a triple-double for Northeastern, which finished with five players scoring in double figures.

Hofstra came in on a roll with four straight wins and with the CAA's top scorer in Wright-Foreman shooting the lights out. Wright-Foreman set a league tournament record with 42 points in a semifinal overtime win against Delaware on Monday night. But Wright-Foreman and his teammates were mostly cold in the opening half as the Pride fell behind by double-digits 13 minutes in as Huskies pushed the pace for a 19-7 run.

Northeastern hit five 3-pointers in the stretch with Pusica's two in a row from long range getting the run going. By the time Jordan Roland hit a wide-open look from left side of the basket, the Huskies were ahead 23-12 and appeared to be cruising.

Hofstra, the CAA's top scoring and best shooting team this season, shot just 28 percent (9 of 32) in the first period. Wright-Foreman went 3 of 12 overall before the half and made just two of seven attempts from behind the arc.

Taylor had a game-high 15 rebounds for Hofstra.

Hofstra: The Pride tied things in the second half behind Wright-Foreman. But it may have taken too much energy to keep things going. Hofstra will be a difficult NIT out for whichever mid-level power conference opponent they draw.

The Huskies have a pair of NCAA victories as double-digit seeds, topping sixth-seeded Fresno State in 1981 and sixth-seeded St. Joseph's a year later. Northeastern is 3-8 all time in tournament play and has lost its last six opening NCAA games.

This game ends the CAA's three-season run at the North Charleston Coliseum. Next year's event will start a three-year stint at the more centrally located Entertainment & Sports Arena in Washington, D.C. Seven of the league's 10 members are located in the state of Virginia or north.

Hofstra is headed to the NIT as the CAA's regular-season champion.