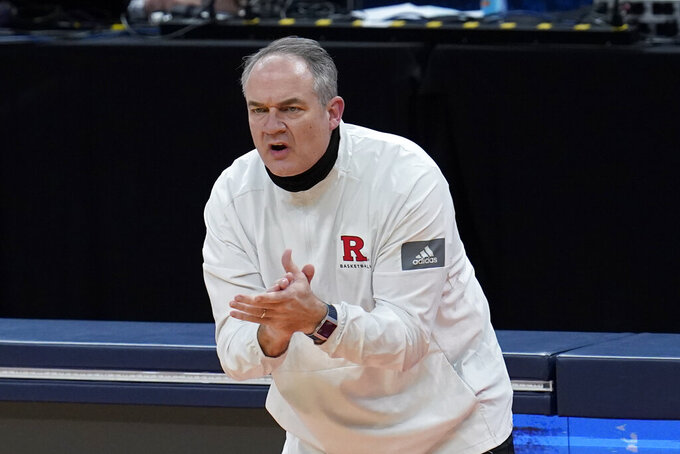 FILE - In this March 19, 2021, file photo, Rutgers head coach Steve Pikiell claps during the first half of a men's college basketball game against Clemson in the first round of the NCAA tournament in Indianapolis. Rutgers of the Big Ten Conference made the NCAA Tournament last season for the first time since 1991. The Scarlet Knights defeated Clemson in the opening round of the tournament and lost to Houston in the second round. (AP Photo/Paul Sancya, File)

PISCATAWAY, N.J. (AP) — After ending a 30-year NCAA Tournament drought last year, Steve Pikiell and Rutgers have a good shot at making it back to March Madness.

Despite having three of the top eight players in his rotation transfer, the Scarlet Knights seemingly have the deepest team since Pikiell took over in 2016-17.

Leading scorer Ron Harper Jr. and point guard Geo Baker are back after considering their professional options. Swingmen Paul Mulcahy and Caleb McConnell are expected to start along with center Clifford Omoruyi, whose freshman season was slowed by a knee injury.

Rutgers posted a 16-12 overall record last season, with a 10-10 record in the very tough Big Ten Conference. They beat Clemson in the opening of the NCAA Tournament and were edged 63-60 in the second round by Houston, which went to the Final Four. The Scarlet Knights were outscored 14-2 in the final 4:33 in blowing a nine-point lead.

“Last year to us, we fell short," Baker said. "The way last year ended, it was unfinished business. We wanted to go to the Final Four and win a national championship. I feel like that’s everybody’s goal this year. That’s everybody’s mindset.”

Rutgers was picked to finish eighth in the preseason poll of the 14-team league.

“That’s Rutgers — every year people sleep on us,” said McConnell, who believes this is the best team since he's been there.

"It’s always fun going into the year being a sleeper. We’ll use it as fuel,” he added.

Replacing Johnson at center might be the biggest issue for the Scarlet Knights. The combination of Omoruyi, Gonzales-Agee and Mag should handle the rebounding. The issue is defense. Johnson might have been the conference's top defensive center. That's crucial in a league the features several outstanding big men, led by Kofi Cockburn of Illinois and Hunter Dickinson of Michigan.

Harper and Baker are the heart of the Scarlet Knights. The son of an NBA player, Harper led Rutgers with a 14.9 point average on 44.1% shooting. He also averaged 5.9 rebounds. Baker, the clutch shooting point guard, averaged 10.4 points, 3.3 assists and 3.1 rebounds.

Clifford, as he prefers to be called, is a unique talent who has the potential to play in the NBA. The 6-foot-11 sophomore has all the tools with the exception of his shot. Pikiell said he has worked extremely hard in the offseason to improve it after opponents gave him room on defense. If he becomes a consistent shooter, Rutgers will be even harder to beat.

After spending three seasons at LSU, Hyatt is returning to the New York City metropolitan area. He had 15 starts last season. One of his best games featured a double-double against St. Bonaventure in the first round of the NCAA Tournament. He had 13 points and 10 rebounds, while adding four blocks and two assists.

The Scarlet Knights play three straight at home, beginning with their Nov. 10 opener against Lehigh. They will play host Clemson in the Big Ten/ACC Challenge on Nov. 30 in a rematch with their NCAA Tournament opponent.

Conference play starts at Dec. 3 at No. 11 Illinois followed by a home game against No. 7 Purdue.