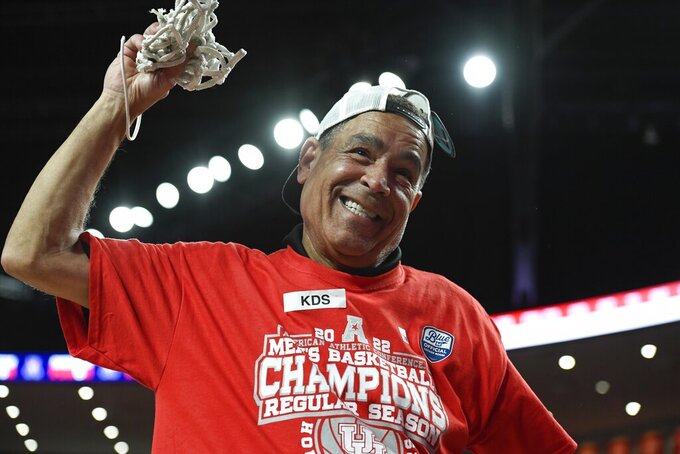 HOUSTON (AP) — When veteran coach Kelvin Sampson took over at Houston in 2014, the Cougars had made the NCAA Tournament just once since 1992.

“There was no success. There was no hope. There was no aspirations,” Sampson said Tuesday, recalling the culture he inherited. “No, there was a lot of just empty words.”

Now in his eighth season, Sampson has transformed the program into a tournament mainstay as the fifth-seeded Cougars prepare to open March Madness on Friday against UAB.

Houston is making its fourth straight NCAA appearance, the school's longest streak since the Phi Slama Jama teams led by Hakeem Olajuwon and Clyde Drexler also went four years in a row from 1981-84. And these Cougars likely would have been making their fifth consecutive trip if the 2020 event hadn’t been scrapped because of the pandemic.

They return to the tournament after losing to eventual champion Baylor last year in their first Final Four appearance since those Phi Slama Jama teams reached three straight in the 1980s.

The Cougars entered the season having lost four starters from that Final Four team and withstood losing stars Marcus Sasser and Tramon Mark to season-ending injuries in December to win both the American Athletic Conference regular-season and tournament championships. It is the fourth time in school history that Houston has swept both conference titles and the first since the 1991-92 season.

“It just feels great, especially after how we felt in December after hearing that Marcus and Tramon would no longer be playing with us,” forward Josh Carlton said. “With the amount of doubt that people had about us and how we would finish the season, and just to finish up the conference champion winners in the regular season and the tournament is great.”

This success was almost unthinkable when Sampson returned to college coaching to revive a career that was derailed by NCAA violations regarding impermissible calls to recruits at both Oklahoma and Indiana. Those violations resulted in a five-year show cause order from the NCAA that kept Sampson, who took Oklahoma to the 2002 Final Four, out of college coaching until he was hired at Houston.

Immediately upon arriving at the campus just south of downtown Houston, Sampson got to work building his staff, focusing on recruiting and campaigning to the administration to improve the woefully inadequate facilities.

“We had no chance when we got here,” Sampson said. “If you divided this league in halves, we were in the bottom half of the bottom half as far as what we had and what they had.”

By 2015 the university’s Board of Regents had approved a $60 million project to renovate the Hofheinz Pavilion, a project helped by a $20 million donation by billionaire Tilman Fertitta, a Houston alum and the owner of the Houston Rockets.

The newly designed arena was reopened on Dec. 1, 2018, as the Fertitta Center, giving Sampson the kind of facility he needed to keep moving the program forward.

Sampson remembers the players who stuck with him in his first season when Houston was 13-19 and just 4-14 in conference play. The Cougars won 22 games in Sampson’s second year for the first of seven consecutive 20-win seasons.

In 2018, they returned to the tournament for the first time since 2010 and the following season they won the conference title, reached the regional semifinals and finished with a school-record 33 wins.

The 66-year-old Sampson was selected AAC coach of the year in both those seasons and captured the honor again this year. His 196-69 record in seven seasons at Houston makes him the winningest coach in school history.

And although Sampson and the Cougars are no longer the scrappy underdogs they once were, that mentality is still in his bones as this team looks to make another deep run in the tournament.

“It’s really humbling for me,” Sampson said. “Because coaches tend to not forget where (they) came from.”