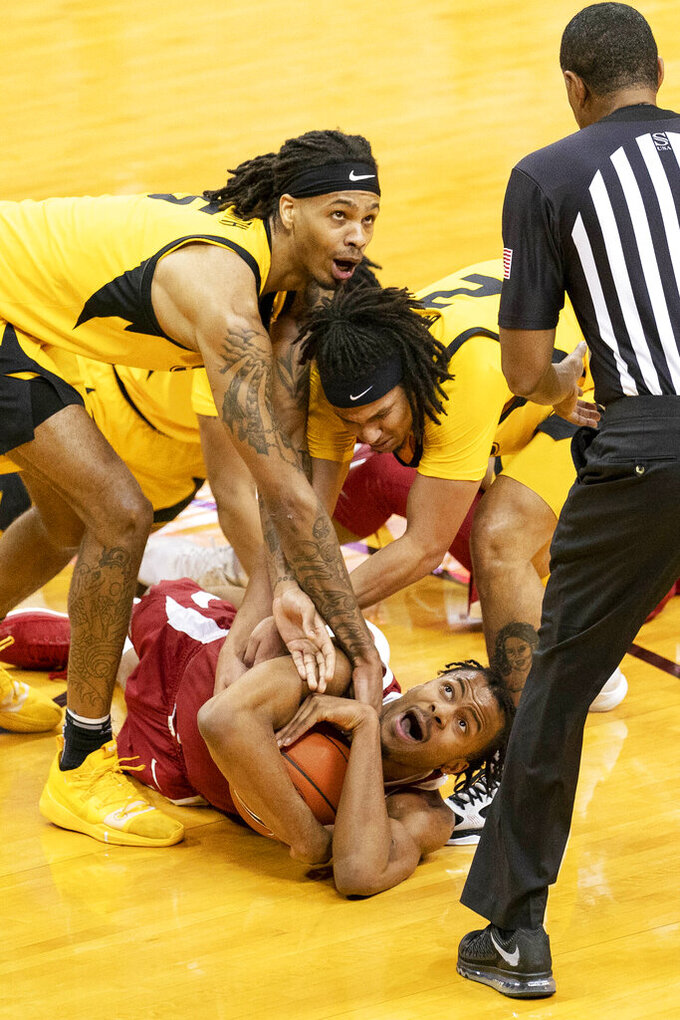 Arkansas' Moses Moody, bottom, tries to hold on to the ball as Missouri's Mitchell Smith, top, and Dru Smith, right, swarm him during the second half of an NCAA college basketball game Saturday, Feb. 13, 2021, in Columbia, Mo. (AP Photo/L.G. Patterson)

Smith, who had missed the Razorbacks’ loss to Missouri last month with an injury, led a balanced attack. Moses Moody scored 15 and Jalen Tate added 14 for Arkansas (16-5, 8-4 Southeastern Conference).

Missouri standout forward Jeremiah Tilmon missed the game because of a death in the family. Tilmon had 25 points and 11 rebounds in the teams’ previous meeting, and without him, the Tigers leaned heavily on 3-pointers, making 13 of 32 from beyond the arc.

The 7-foot-3 Connor Vanover, who played just four minutes in the first half, got going after the break and helped Arkansas turn a 35-31 halftime deficit into a 58-51 lead with 11 minutes left. Vanover finished with 12 points. Arkansas did much of its damage at the foul line, converting 20 of 23 free throw attempts.

Missouri’s Parker Braun sent the game into overtime when he scored a reverse layup off a nice feed from Dru Smith to tie the game at 73 and then blocked Devonte Davis’ shot on the other end.

Davis got his revenge in overtime when he scored the go-ahead basket with 33 seconds left.

Missouri: The NCAA Tournament selection committee revealed its current top 16 teams on Saturday, and the Tigers received a No. 4 seed as the No. 16 team overall. Missouri earned that spot thanks in large part to victories over two No. 2 seeds (Illinois and Alabama) and one No. 3 seed (Tennessee). Two straight losses, though, raise some concerns that the team is trending in the wrong direction late in the season.

Arkansas: The Razorbacks won their sixth straight SEC game — sandwiched around a nonconference loss to Oklahoma State — and this one should come in handy on their NCAA Tournament résumé. Missouri is the first AP Top 25 opponent Arkansas has beaten this season.

Arkansas: The Razorbacks play Florida on Tuesday at home.